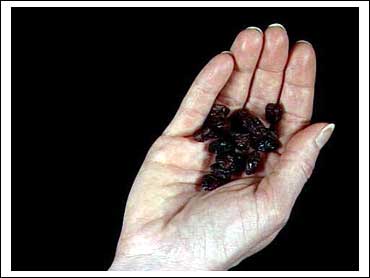 Raisins may be a healthy snack for your teeth as well as your body.

Researchers have found that certain compounds contained in raisins appear to fight the bacteria in the mouth that cause cavities and gum disease.

"Our laboratory analyses showed that phytochemicals in this popular snack food suppress the growth of several species of oral bacteria associated with [tooth decay] and gum disease," says researcher Christine D. Wu, a professor at the University of Illinois at Chicago College of Dentistry.

"Raisins are perceived as sweet and sticky, and any food that contains sugar and is sticky is assumed to cause cavities," says Wu. "But our study suggests the contrary. Phytochemicals in raisins may benefit oral health by fighting bacteria that cause cavities and gum disease."

Wu presented the results at a meeting of the American Society for Microbiology in Atlanta. Her study was funded by the California Raisin Marketing Board.

Laboratory tests showed that this phytochemical slowed or stopped the growth of two different types of bacteria commonly found in the mouth: Streptococcus mutans, which causes cavities, and Porphyromonas gingivalis, which causes gum disease.

It's not clear how many raisins a person would have to eat to benefit from these cavity-fighting and gum disease-fighting benefits.