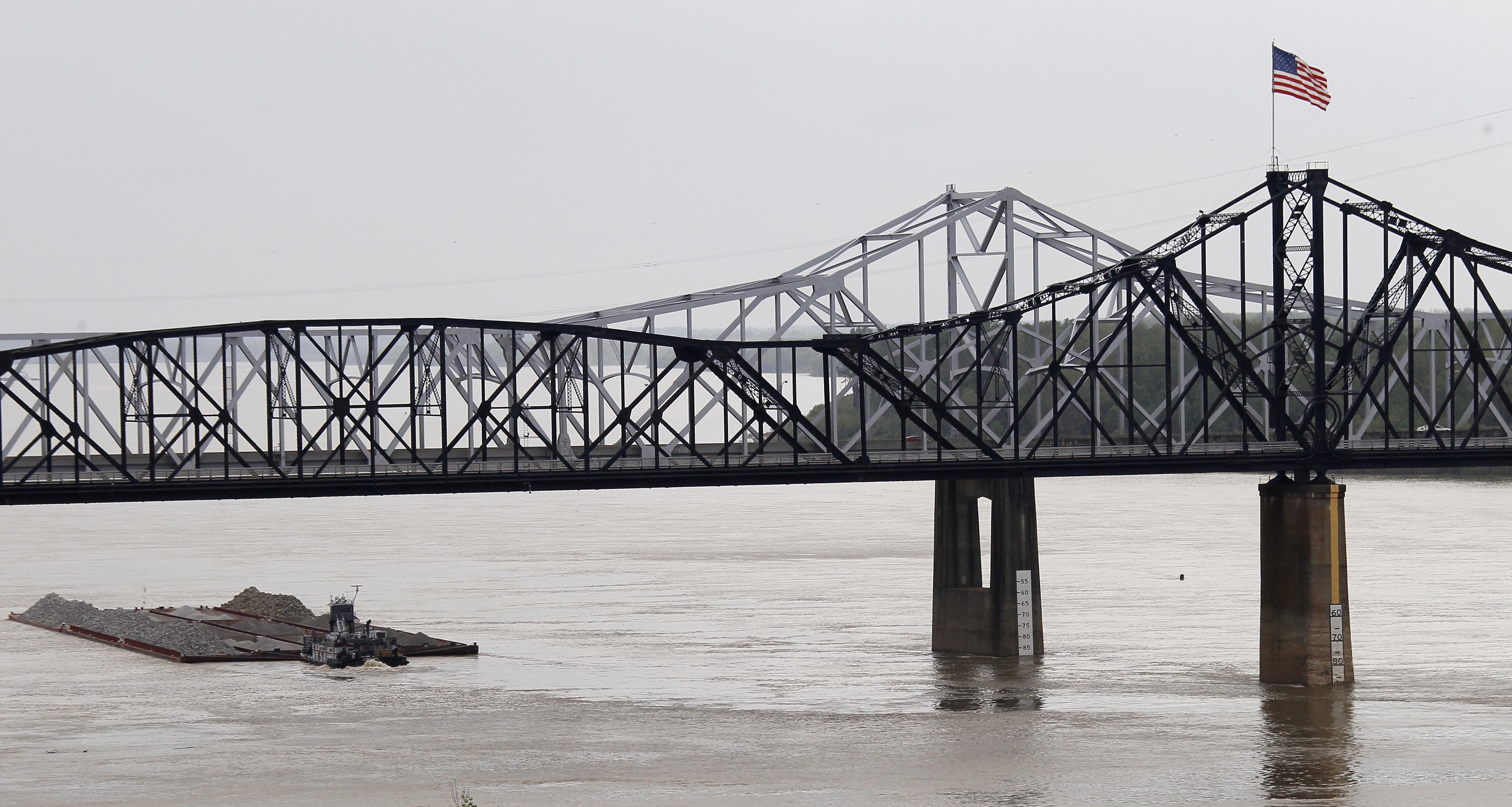 ST. LOUIS The Mississippi River, so low for much of the winter that barge traffic was nearly halted, could reach up to 10 feet above flood stage by the middle of next week in parts of Iowa, Illinois and Missouri, National Weather Service hydrologists said Wednesday.

The weather service is predicting 3 to 4 inches of rain — and perhaps more — from Kansas City, Mo., to Chicago by Friday morning, the result of an unsettled weather pattern that prompted widespread tornado and thunderstorm watches.

Soil is already saturated from an unusually wet early spring, raising concerns along the Mississippi from the Quad Cities, which are along the Iowa-Illinois border, south to St. Louis.

"I'm worried," said Mark Fuchs, a National Weather Service hydrologist in suburban St. Louis. "Major flooding appears to be on the table at a lot of locations. North of St. Louis, we're looking at the kind of flooding we haven't seen since 2008."

Floods in the spring of 2008 were particularly troublesome in Iowa, where hundreds of homes were damaged in Cedar Rapids, Iowa City and other towns. Maren Stoflet, a hydrologist for the weather service in the Quad Cities, said that with the ground already soaked, all the new rain will run off into rivers.

The flooding is an ironic twist considering that the Mississippi was approaching record low levels all winter following months of drought. The Corps of Engineers worked feverishly to dredge the bottom of the river enough to keep barge traffic moving, though loads were limited for several months.

But late-winter snow and frequent rains have pushed river levels back to normal and beyond. The Mississippi on Wednesday was at or near flood stage at several spots north of St. Louis, slightly lower to the south.

The rain this week is expected to be furious at times, up to an inch an hour in some cases, Stoflet said. That could create flash flooding at smaller waterways. Tributaries to the Mississippi and Missouri rivers could also flood, and that water eventually pushes into the bigger rivers, which would crest next week.

Fuchs said if the rain falls as predicted, minor flooding would occur on the Missouri River in Missouri, while the Mississippi could rise 8 to 10 feet in some spots, including St. Louis.

Property buyouts, enhanced levees and flood walls will limit any damage, but several roads, thousands of acres of farmland and a few homes and businesses would be impacted and small levees could be overtopped.

The historic downtown area, including Twain's boyhood home, is protected by an earthen flood wall, and buyouts have removed flood-prone homes outside the wall's perimeter. But Hark said the excessive rain could create a sudden rise that would cause Bear Creek, a Mississippi River tributary, to back up, closing roads and threatening some homes.

About 30 miles to the south, Louisiana, Mo., has no flood wall. The downtown is far enough from the river that it is in no danger, but a flood reaching 8 to 10 feet above flood stage would push muddy river water over Highway 79 — the main north-south highway through town — and damage a few homes and businesses, City Administrator Bob Jenne said.

"We do have sand and all the bags already stockpiled in the event we need them," Jenne said. "Right now, it's wait and see."

Potentially worsening the flooding in the not-too-distant future is another strong snowstorm in the northern Plains, snow that will eventually melt and trickle into rivers. The newest system could drop as much as 15 inches of snow in western South Dakota by Thursday, forcing schools to close and making travel dangerous. It follows a weekend storm that dumped a single-day record 17.3 inches of snow on Bismarck, N.D.