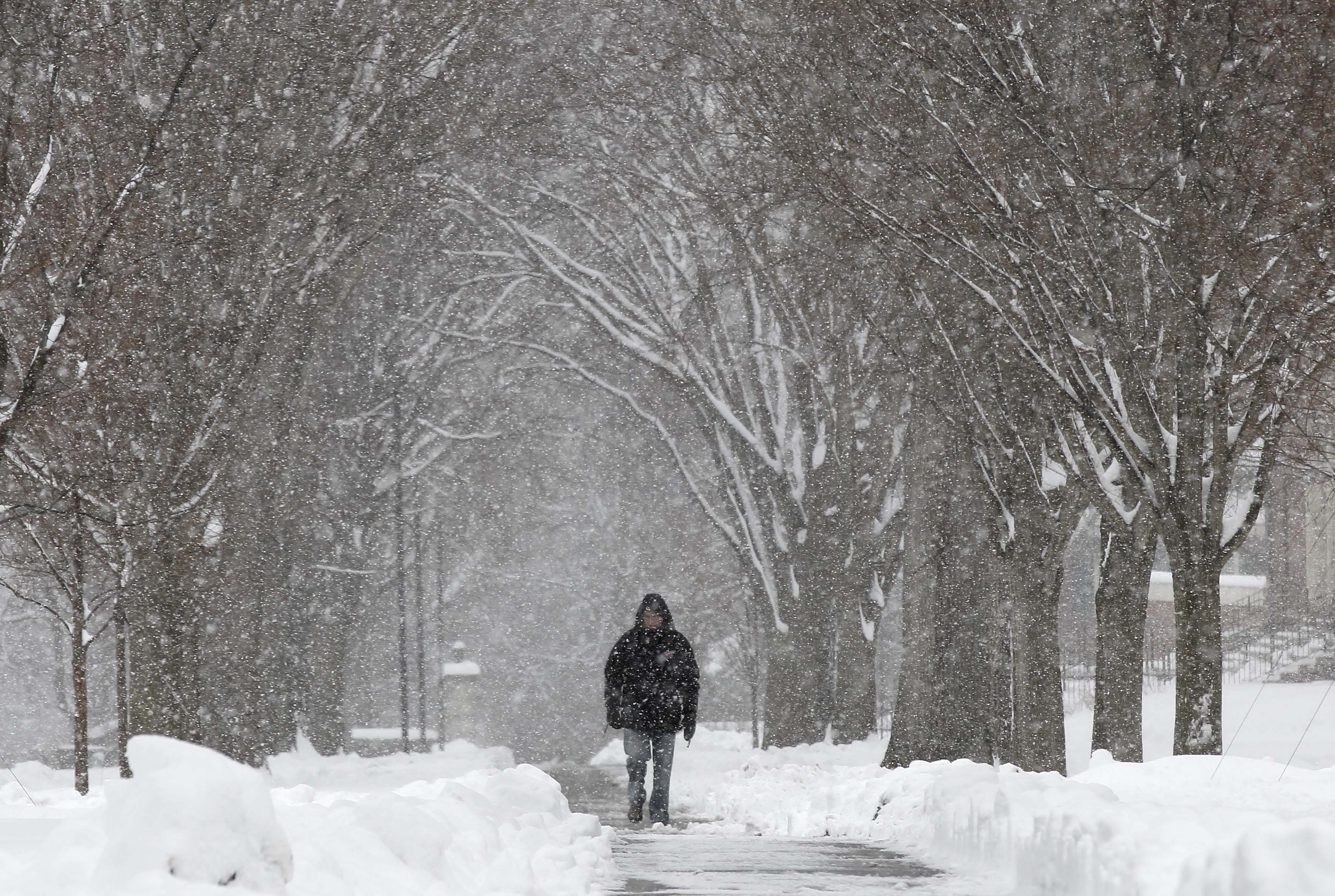 BOSTON Snow and sleet blasted the Northeast on the last full day of winter Tuesday, closing schools and turning roads into a slick mess that got the Harlem Globetrotters' bus into a minor accident.

Some places were looking at well over a foot of snow by the end of a storm that commuters hoped would be the last. Unwelcome as it was, there's nothing unusual about a snowstorm in the Northeast this late in the season, when it can still get plenty cold enough.

"They don't happen all the time, but it's not, you know, unheard of," said Alan Dunham, a meteorologist with the National Weather Service in Taunton, Mass.

Some schools in upstate New York, Massachusetts and Connecticut closed, adding a few more snow days to the calendar. Massachusetts officials postponed the English composition section of its standardized state test until Monday, to keep all schools on the same test date.

Late-winter snow also socked other parts of the northern U.S., which as much as 2 feet forecast in parts of Michigan's Upper Peninsula. Icy roads caused some crashes Tuesday morning in Michigan.

In Marlborough, Mass., the Harlem Globetrotters' bus collided with a car on Interstate 290, but no one was hurt and the bus was able to drive away, the state police said. No citations were issued.

A storm earlier this month dumped more than a foot of snow on some parts of the region and caused coastal flooding in Massachusetts, The snow from that storm was nearly gone in some places before the new system started overnight, and the snow could continue into Tuesday night in northern areas.

Nina Walker, of Woburn in suburban Boston, said she had to shovel about 8 inches of snow off her driveway before driving to Boston's South Station to take a train to New York. As a lifelong New Englander, she takes the snow in stride, but draws the line at storms after March 31.

Judy Andonian, 67, of Manchester-by-the-Sea, who was dropping off mail at the post office in Wenham, said she recently moved back to Massachusetts from Arkansas to be closer to her grandchildren.

Claudia Staten, of Kingston, called the 4 inches on the ground in her town south of Boston "nuisance snow."

"I'm ready for spring," said Staten, who took a train to work Tuesday to her job as a public service manager for the Massachusetts Bar Association. "November, December and January were fine. It was a tease because winter has been here for the last six weeks."

Portland, Maine, could get at least a foot of snow, with Montpelier, Vt., expecting 10 to 18 inches, and Concord, N.H., 7 to 13 inches. But those totals could go much higher if the storm continues into Tuesday night.

Colder than normal weather is likely on tap for at least another week, as air flows into the region from the north, instead of the south, said Dunham, the meteorologist.

Some welcomed the storm, which could extend the ski season. Just a year ago this week, temperatures hit the 80s, prompting skiers in Maine to strip down to shorts and bikini tops and forcing an end to the season at many mountains.

"It's fantastic. What a difference a year makes," said Sue Parker, spokeswoman for Ski West Mountain in Queensbury, N.Y., about 50 miles north of Albany.