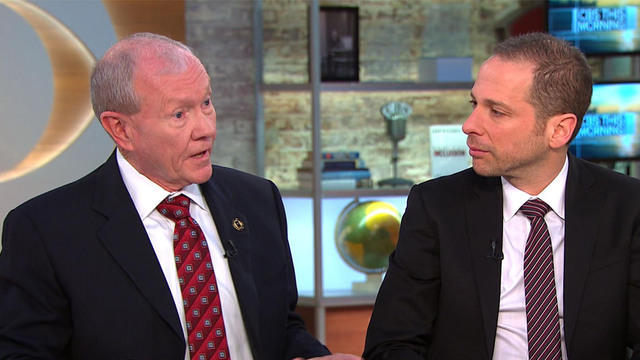 A former military leader and a college professor are teaming up to offer advice on the challenges of leadership with their new book, "Radical Inclusion: What the Post-9/11 World Should Have Taught Us About Leadership."

Retired Gen. Martin Dempsey spent 41 years in the military, culminating in four years as chairman of the Joint Chiefs of Staff, the nation's highest-ranking officer and military adviser to the president. His coauthor Ori Brafman, on the other hand, majored in peace studies. The pair joined "CBS This Morning" to discuss what "radical inclusion" means and how it applies to leadership in today's world.

Dempsey entered the army in the mid-1970s when the military was grappling with the fallout from the Vietnam War and issues like drug addiction and how to bridge the racial divide among its ranks.

"And in that environment is when I first started thinking about a leader's most important responsibility, which is to develop in the team a sense of belonging, and that's why we wrote the book – because we think it's even harder to lead today," he said. "We think developing trust is important and you can really only develop trust if you include people in every aspect of the organization."

Brafman added that inclusion isn't simply "nice to have," it's a "strategic imperative."

"The way that we tackled it is, it's about winning or losing and if you want to win, you need to be inclusive. You need to create a sense of belonging with everyone within your organization and even more broadly on a global scale," said Brafman, who teaches at the University of California-Berkeley's Haas School of Business.

Asked to evaluate President Trump's leadership, Dempsey responded, "I will not evaluate our president in terms of the book." However, he did weigh in on reports of North Korean dictator Kim Jong Un's apparent openness to denuclearization negotiations with the U.S.

"The question we have to all ask ourselves is: What will we be asked to potentially give up? Is it worth it? Is it in our national interest to do so? And we have to figure out whether we have the stamina to stick with this because this is going to be a long process and we don't want our own readiness to degrade in the interim," Dempsey said.

He also pointed those security challenges back to the concept of inclusion.

"Whether it's North Korea, China, Russia, Iran, you know, this radical stretch from Afghanistan to Nigeria – is that's why we need inclusion. You can't do five things at once by yourself. North Korea exists in a sphere of influence in part of which is ours, Japan's, South Korea's, Australia's. We have allies and partners all through the region," he said.

How traffickers are smuggling drugs with clone vehicles