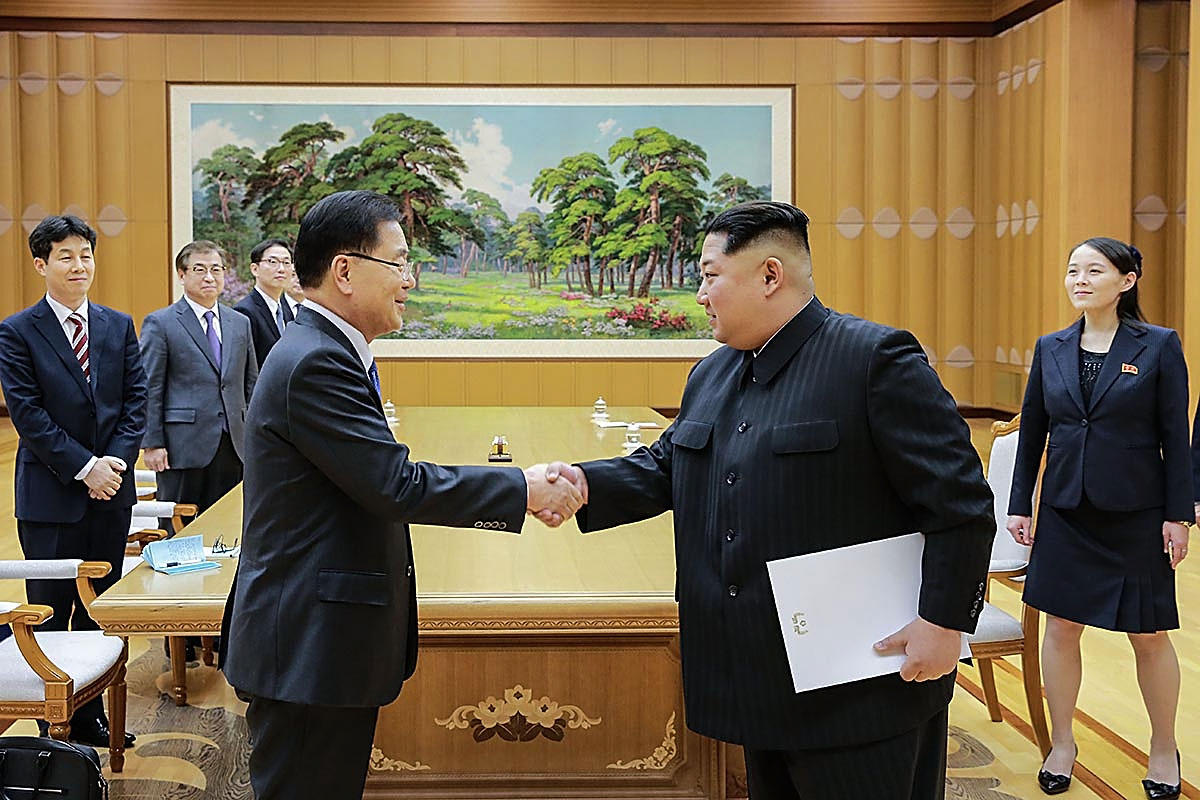 Security director Chung Eui-yong said the North also made it clear that it wouldn't need to keep its nuclear weapons if military threats against the country were resolved and it received a security guarantee. As CBS News correspondent Ben Tracy reports, however, it is not entirely clear what that means.

A high-level South Korean delegation, including Chung, dined on Monday with Kim Jong Un and his wife in Pyongyang -- a meal said to have lasted for more than four hours. North Korean state media said Kim hoped to, "write a new history of national reunification."

The fast-paced diplomacy on the Korean Peninsula could complicate the Trump administration's strategy of isolating North Korea with sanctions, Tracy notes. The White House has repeatedly said it is open to talks -- but only if North Korea abandons its nuclear weapons program first.

Mr. Trump addressed potential talks with the North Koreans while welcoming Sweden's prime minister in the Oval Office Tuesday afternoon. He told reporters that hopefully it will go in a "very peaceful and beautiful path" and it would be "a great thing for the world."

Mr. Trump called the situation in the Korean peninsula "very tenuous" and said it's "going to be very interesting to see what happens" with regards to possible talks with the regime. He credited the Winter Olympic Games as a being stepping off point for the negotiations, saying the U.S. "had a lot to do" with North Korea's inclusion making the games "very successful."

"I thought North Korea was terrific, they went into the Olympics, they went in with good spirit, they did well, let's see if we can carry it over," he said.

Chung said the North also promised not to use conventional or nuclear weapons against South Korea.

The head of South Korea's national intelligence service was part of the delegation, and he will now be able to provide the United States with a good read on Kim's frame of mind, and whether the promises should be believed.

President Trump responded to the news Tuesday with a tweet, sounding hopeful about "a serious effort is being made by all parties," but warning that the detente between the two Koreas could also be fueling "false hope."

CBS News' Pamela Falk, reporting from the United Nations, says that while a summit between North and South Korea is a breakthrough in and of itself, the North's demands for the theoretical abandonment of its nuclear program are massive, even if vague.

Just a few days ago North Korea called President Trump's demand that Kim abandon his nuclear program -- as a precondition to diplomatic negotiations -- "preposterous," ruling out the possibility.

Nonetheless, Falk says the North may be showing a willingness to put some kind of moratorium on weapons testing because U.N. and U.S. sanctions are biting. U.S. Ambassador to the U.N. Nikki Haley has been insistent on further tightening those sanctions.

If there were to be a breakthrough, plans are in place: The nuclear watchdog chief told CBS News in an exclusive interview late last year: "We can move rather quickly" to inspect North Korea. International Atomic Energy Agency (IAEA) Director General Yukiya Amano said he has organized a team at the agency, ready to be on the ground "on short notice" if there is a diplomatic resolution.

"That may be putting the cart before the horse," Falk notes, "since removing what the North considers security threats may be more than the U.S. is willing to do."

Chung made his remarks Tuesday after the South Korean officials returned from their extraordinary visit to the North, where they met with Kim. The two Koreas agreed to hold summit talks in late April, according to the officials from the South.

South Korea's presidential office also said Tuesday that the countries had agreed to set up a telephone hotline between their leaders.

The rival Koreas have been taking steps to repair ties strained by North Korean nuclear weapons and missile tests after the North reached out to the South over the recently concluded Pyeongchang Olympics.