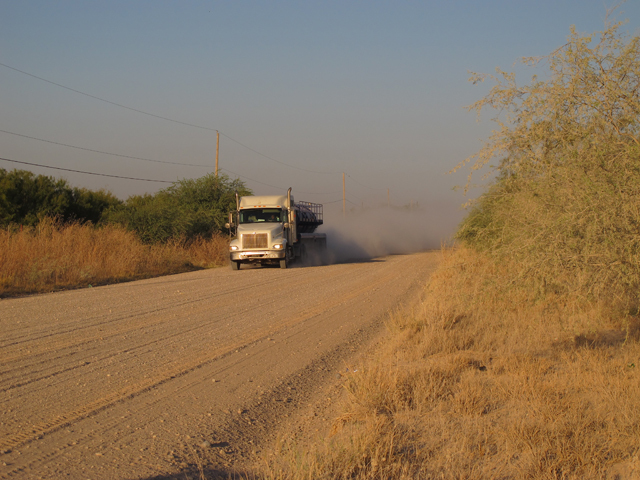 LA JOYA, Texas A Texas state trooper who fired on a pickup truck from a helicopter during a deadly chase through the desert was trying to disable the vehicle and suspected it was being used to smuggle drugs, authorities said Friday.

The disclosure came a day after the incident left two illegal immigrants from Guatemala dead on an isolated gravel road near the town of La Joya, just north of the Mexico border.

State game wardens were the first to encounter the truck Thursday. After the driver refused to stop, they radioed for help and state police responded, according to Parks and Wildlife Department spokesman Mike Cox.

When the helicopter with a sharpshooter arrived, officers concluded that the truck appeared to be carrying a "typical covered drug load" on its bed and was travelling at reckless speeds, police said.

After the shots were fired and the truck's tires blown out, the driver lost control and crashed into a ditch.

Eight people who were in the truck were arrested. At least seven of them were also from Guatemala. No drugs were found.

The sharpshooter was placed on administrative leave, a standard procedure after such incidents.

An expert on police chases said the decision to fire on the truck was "a reckless act" that served "no legitimate law enforcement purpose."

"In 25 years following police pursuits, I hadn't seen a situation where an officer shot a speeding vehicle from a helicopter," said Geoffrey Alpert, professor of criminology at the University of South Carolina. Such action would be reasonable only if "you know for sure the person driving the car deserves to die and that there are no other occupants."

In general, he said, law enforcement agencies allow the use of deadly force only when the car is being used as a weapon, not "just on a hunch," Alpert added.

The Texas Department of Public Safety did not immediately respond to an Associated Press request for the agency's policy governing the use of deadly force.

Other law enforcement agencies that patrol the border say they have limits on the practice.

For instance, federal Customs and Borders Protection agents "are trained to use deadly force in circumstances that pose a threat to their lives, the lives of their fellow law enforcement partners and innocent third parties," agency spokesman Doug Mosier said.

But a report presented Thursday to the United Nations by the American Civil Liberties Union said shootings and excessive force by Customs and Border Protection agents on the border have left at least 20 individuals dead or seriously hurt since January 2010.

Of those, eight cases involved agents responding to reports of people throwing rocks. Six involved people killed while standing on the Mexican side of the border.

Troopers are regularly involved in high-speed pursuits, often chasing drug smugglers into the river and back to Mexico.

Agency Director Stephen McCraw has said state police were pushed into that role because the federal government's efforts to secure the border have been insufficient.

Diplomats quickly began their own investigation into the chase.

The head of the Guatemalan Consulate in McAllen said she is demanding federal and state authorities provide an explanation.

"I am baffled. I can't understand how this could happen," Alba Caceres said. "I understand that the agents are doing their job, that they are protecting their border. But if there is someone who is responsible for this, he has to pay."

The Guatemalans started their journey 19 days ago near Guatemala City, with plans to stay with friends and relatives in New York, New Jersey and Houston, she said.

They were covered with a tarp, but as the car sped away from the game warden and the helicopter, the men "were having lots of trouble holding on to that tarp, Caceres said. "They must have seen them."