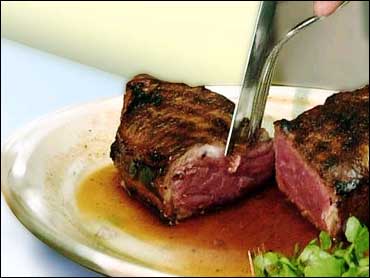 The low-carbohydrate craze is so popular that restaurants are changing their menus to keep up with the trend.

But what hasn't changed for the past 30 years are the basic tenets of the Atkins diet. It calls for a control of the intake of refined carbohydrates while eating a balance of fats and protein. Well, that is until now.

On Sunday, Jan. 18, The New York Times printed an article that has stirred some controversy. It stated that the director of research and education for Atkins Nutritionals is now telling health professionals that only 20 percent of dieters' calories should come from saturated fat.

The company declined to be interviewed on The Early Show but issued the following statement: "There is absolutely no science to support any claims that eating red meat and saturated fat as part of your Atkins program is anything other then beneficial."

Dr. Louis Aronne, an obesity specialist at New York Presbyterian Hospital and president-elect of the North American Association For The Study Of Obesity, tells The Early Show co-anchor Julie Chen the problem is people don't really read the Atkins book. They just think they can eat all the fat they want throughout the diet, but that is not the case.

"The problem is that the common perception, that you can eat all the meat, all the bacon, all the cheese, that is not correct. If you do that, many people will gain weight doing that. And so we have to get over that," he explains. "That's what they call the induction phase where you eat like that for two weeks. Your appetite seems to be settled down. After this, Dr. Atkins, in deference to his book, says that you should move on to less fatty foods, to fish, to poultry and to vegetables."

He notes The New York Times reported that the Atkins lectures to physicians say patients should eat less saturated fat, which primarily comes from meat, than in the past.

Though Dr. Aronne says the Atkins diet does work for some people, he says he does not promote a particular diet.

Dr. Aronne points out there are no specific dangers that can be linked to the Atkins diet. He says, "This is actually being studied now in a National Institutes Of Health supported study to understand exactly whether this is better or worse than other kinds of diets. We really don't know whether this is a good diet or not."

As for other low-carb diets, he says, "The Zone and the South Beach Diet are also similar in certain ways but not in other ways. They're more liberal with carbohydrates. But they're what we call lower glycemic diets with less sugar and starch. In some ways these are healthier versions of the Atkins diet. We recommend diets more similar to those diets."