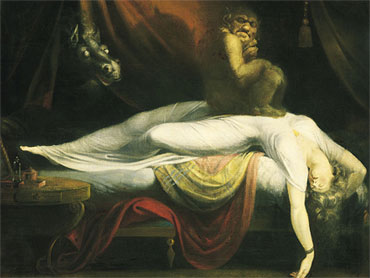 For centuries, frightening apparitions have been the stuff of nightmares. Now, nightmares themselves have become the stuff of research, as Susan Spencer reports in our Cover Story:

An October night, and Halloween's in the air.

At the Nightmare Haunted House, practically a New York institution, no one expects sweet dreams. But real-life nightmares are no laughing matter.

"I'm running away from something, and I'm stuck in place," said Andrew, recalling his nightmare. "Like, I can't run, I can't walk, I can't move. I try to step, and I just fall over."

"I go into the bathroom, I turn on the light, and the entire bathroom is literally covered in blood," said Lisa.

Megan described the nightmare she has most often: "My teeth will just all of a sudden start becoming loose, and fall out. And recently I had a dream where I woke up from my dream, and I still didn't have teeth."

Like millions around the world, these young people suffer from chronic nightmares. Not just bad dreams but horrifying, hair-raising dreams.

The devil really IS in the details . . .

"The imagery can be very, very vivid," said University of Montreal psychology professor Antonio Zadra. "And so, even once they awaken, they're still left with those images replaying in their minds, and it can be very troubling."
Zadra got a wake-up call early in life, when he had a nightmare so powerful that he gave up on med school so he could study them.

For two decades, he's been following his dreams . . . by collecting other people's - between nine and eleven thousand.

And it's not hard for Professor Zadra to find bad dreams: As many as one in four adults has one nightmare or more a month. Roughly one in 17 reports being frightened by nightmares at least once a week.

This is nothing new. In 1781 artist Henri Fuseli painted his vision of "The Nightmare," portraying it as a menacing visitor, suffocating its victim.

"Originally, nightmares were conceived as these demons or evil forces that came and visited us during our sleep," Zadra said.

"We thought that people were possessed," said Spencer.

"Yes, possessed, or they were being tempted, or again, being made aware of the evil forces that surrounds them."

Some of the most common nightmares involve our secret fears: The teacher dreams he's in front of class naked, or the doctor walks into surgery and suddenly can't remember how to operate.

Or the television correspondent finds herself on-camera, mid-sentence, and just goes . . . blank!

Sleep specialist Dr. Ross Levin says there are some personalities more disposed to having nightmares: "People who are anxious, people who get distressed a lot, particularly when something bad occurs, are much more likely to have frequent nightmares."

Maybe even when the "something bad" occurs on screen. Dr. Levin says that "The Exorcist," and its frightening dream sequence, inspired his whole career.

Today, using something called Image Rehearsal Therapy, he says he can stop bad dreams from happening in as few as three sessions.

"Imagine the nightmare and imagine changing the nightmare in a way that becomes less nightmarish, and practicing that imagery over and over again during the day," said Dr. Levin. "And that tends to rewire the nervous system, we think."

"So, by thinking of an alternative ending to my nightmare during the day, I can re-script it?" asked Spencer.

"Correct," said Levin, who added, "You can make it go away completely."

"I had one patient, for example, who had the recurrent nightmare that someone was chasing her into a dark alley, over and over," said Dr. Levin. "So, we worked on changing that to her turning around and the man turns and says, 'Miss, you left your wallet on the table.'

"So, in this situation she reported having this dream for the next four or five nights the same way, except she incorporated the new ending."

"So, she got her wallet back?"

"And she got her wallet back! So, there was an added benefit."

As an example, she tackled for us that common dream about losing teeth.

"It doesn't necessarily mean the same thing for everybody," Dr. Gann said. "There are people who have talked about teeth falling out as being quite symbolic of transitions in life. Because when you're young and your teeth are falling out, that's a period of transition as a child. When your teeth fall out and you're old, that's also [a] very important transition period."

"Once you establish those connections, can you usually stop these nightmares from occurring?" Spencer asked.

"They typically do abate, yeah. They do," said Dr. Gann.

Surprisingly, the promise of a cure fell flat with our nightmare sufferers, who seemed convinced there's good in their bad dreams . . .

"There are a lot of aspects to having nightmares that are kind of interesting," said Megan. "And a lot of them are the fact that I don't ever want to actually experience any of these things. So it's kind of like I'm still getting to have these experiences, but from the safety of my bed."

Andrew said it's almost fun to analyze them in the morning: "Not only do you get a sense of relief when you know that it's a dream, it's almost like, 'Oh, wow, like, how crazy was that?' It's almost like thinking about a movie or something. It's just fun."

Hillary Clinton: A life in pictures