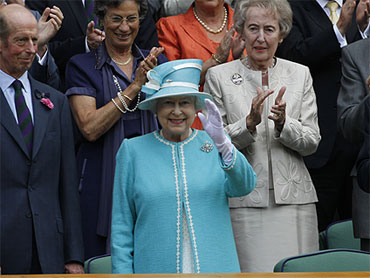 Queen Elizabeth II made her first appearance at Wimbledon in 33 years Thursday - applauding Briton Andy Murray as he won his second match and greeting a giddy Serena Williams, who showed off her curtsy.

Wearing a white dress with a blue coat and matching hat, the 84-year-old queen braved scorching temperatures as she greeted onlookers and met former champions such as Billie Jean King and Martina Navratilova before meeting the tennis tournament's top seeds.

Williams, who wore a form-fitting white top and skirt, had talked at length about her efforts to perfect her curtsy and sport more conservative clothing - the defending champion is known for outrageous outfits such as a skin-tight black catsuit and fluorescent orange micro-shorts.

Smiling widely, Williams took a deep curtsy but was not scheduled to play on Center Court where the queen will watch matches from the Royal Box. Venus Williams, who was wearing a glamorous mauve dress, also appeared to curtsy as she was introduced to the monarch.

"She looked stunning, she's just amazing," said Debbie Moody, a 45-year-old nurse, after watching the queen's arrival. "It's a shame she hasn't been for so long, but I'm so glad she has decided to come back."

Although in decades past, the tennis club maintained a tradition of a bow or curtsy to royal attendants, that practice was dropped in 2003. Still, many indulged the monarch Thursday.

"We are here for the tennis, but I'm delighted the queen turned up as well. I love her smile when she's greeting people," said Romey Allison, a retired 53-year-old attending with her husband.

Murray, the only British singles player left in the tournament in a year of exceptionally poor showings by the host country, appeared nervous at first but went on to score an easy victory against Jarkko Nieminen of Finland 6-3, 6-4, 6-2.

Spectators cheered and wolf-whistled as No.4 seed Murray and Nieminen bowed together in the queen's direction both before and after the match. She was seen with the Duke of Kent. Buckingham Palace said her husband Prince Philip, the Duke of Edinburgh, canceled because of previous engagments.

Rafael Nadal follows with a match against Robin Haase of the Netherlands, but the queen left before watching that match.

The last time the queen visited in 1977, she presented Virginia Wade with the ladies' singles championship. No Briton has won a singles title since.

Although the monarch isn't known to have a particularly strong personal interest in tennis, the royal association with Wimbledon spans more than 100 years.

The queen's, grandfather, King George V, became patron of the All England Club in 1910, and the tradition has been maintained since.