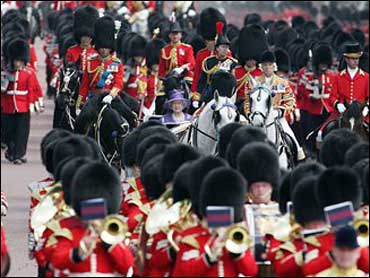 British soldiers in tall bearskin hats marched before Queen Elizabeth II and military jets saluted her with a flyby over Buckingham Palace on Saturday in the second round of celebrations of her 80th birthday.

Thousands of Londoners and tourists — many waving small Union Jack flags — yelled "Happy Birthday!" to the queen, who waved back with a white-gloved hand.

Elizabeth, wearing a deep purple coat and hat, rode down the mall near the palace in an ivory carriage built for Queen Victoria in 1842 for the ceremony at the Horseguards Parade ground in central London. Mounted members of the Household Calvary rode before her, clad in golden armor.

The celebration was nearly interrupted when two father's rights activists wearing only Union Jack boxer shorts attempted to hurl themselves in front the queen's carriage.

The two men, members of a group campaigning to give fathers in broken families greater access to their children, were quickly arrested, a police spokeswoman said.

Later, 49 aircraft — led by Spitfires, Hurricanes and a Lancaster commemorating the World War II Battle of Britain — flew by as the queen and her family watched from a palace balcony.

The Trooping of the Color parade — in which a regiment is chosen to present its color, or flag, to the monarch — marks the queen's official birthday every June. Dating back to the early 18th century, the ceremony is one of Britain's grandest annual shows of royal pageantry.

This year the designated regiment was the 1st Battalion Welsh Guards.

Elizabeth was born April 21, but the official, outdoor celebration comes two months later, when the chance of warm weather is better. It was hot and sunny in downtown London on Saturday.

"As Americans, we're sort of in awe that thousands of people would come out for the queen's birthday," said Bill Wycoff, 59, of Sewickly, Pa. "I can't imagine Americans doing this for George Bush or any other American president."

Martin Howe, 65, a retiree from Cambridge, north of London, said the queen symbolizes an old British tradition of good manners, respect and decency.

"She is above politics," Howe said. "She isn't someone who has an ax to grind."

Elizabeth rode to and from the palace with her husband Prince Philip, 85, who wore a bearskin hat and ceremonial red military dress.

Their son, Prince Charles, and daughter, Princess Anne, rode behind them, and grandson Prince Harry went ahead in a navy blue uniform. He was joined by Prince Andrew and Andrew's daughters, Princesses Eugenie and Beatrice.

Absent from the celebrations were the queen's eldest grandson, Prince William, who was training at Sandhurst military academy, and Charles' wife, Camilla, who was mourning the recent death of her father, Bruce Shand.

After the royals returned to the palace, a set of World War I cannons fired off a salute to the queen.

The palace also published its annual list of honors for Elizabeth's birthday.

Budget airline chief Stelios Haji-Ioannou, founder of the carrier easyJet, was among those who received knighthoods on the list of 959 honorees. Retail tycoon Philip Green was also made a knight.