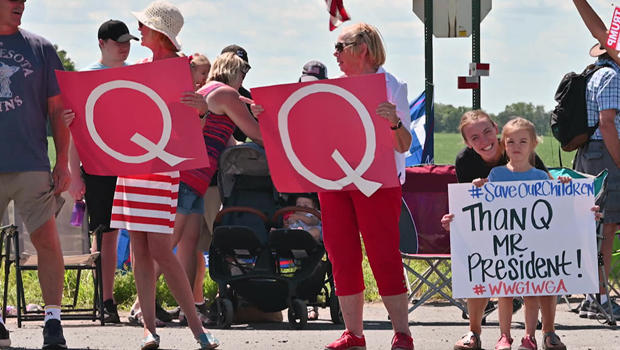 It's one letter that spells out a bizarre conspiracy theory, with President Trump at the center: Q, representing someone, or something, called QAnon.

Starting in 2017, a mysterious someone calling him- or her- or themselves "Q" began posting tangled clues on internet message boards. They're called "Q-drops," and they're styled as if they contain Washington insider information, reports Wired magazine editor-in-chief Nicholas Thompson.

Whitney Phillips, an assistant professor at Syracuse University who studies disinformation, said that QAnon is "a bundle of different beliefs, but the one that often gets focused on the most is the idea that Donald Trump is fighting, and winning, a war against, Satanic, cannibalistic, child-molesting top Democrats."

Phillips said, "This idea that you have a group of Obama holdovers who are actively trying to undermine Trump at every turn. And sometimes that is explicitly referred to as the 'deep state.'"

President Trump has refused offers to distance himself from QAnon, In August one reporter asked, "Mr. President, at the crux of the theory is this belief that you are secretly saving the world from this Satanic cult of pedophiles and cannibals. Does that sound like something you are behind, or a believer in?"

"Well, I haven't heard that," Mr. Trump replied. "But is that supposed to be a bad thing or a good thing? I mean, you know, if I can help save the world from problems, I'm willing to do it. I'm willing to put myself out there."

Democratic presidential nominee Joe Biden, however, has another diagnosis: "I've been a big supporter of mental health," he said. "I recommend the people who believe it maybe should take advantage – while it still exists – in the Affordable Care Act.

"I feel now very strongly that Q has become sort of a line in the sand – that if you are against Q, then you are either actively or passively supporting human trafficking and child trafficking," said Mike Cargile, the Republican nominee for Congress in a heavily Democratic district east of Los Angeles.

Thompson asked Cargile if Q has accused certain notable people of being involved in human trafficking, such as … Hillary Clinton?

How about former Hillary Clinton aide Huma Abedin? "Let me back up – I think I did hear something about Nancy and Huma," Cargile said. "But here's the thing: The names you've named have all had allegations of doing things wrong. Where's the investigation?"

It turns out that when you talk to a Q believer, every question just begets more questions.

Like when Thompson asked about some of the more outlandish Q beliefs regarding President Obama. "How does one investigate whether Barack Obama worships Satan or drinks blood?" he asked.

"Well, I would start by puttin' him in front of a panel of people and asking him," Cargile replied. "Has anybody asked him, 'Sir, have you engaged in these activities?'"

Joseph Uscinski, an associate professor of political science at the University of Miami who studies conspiracy theories, said of QAnon, "None of this is new, none of it's creative. Essentially all it's doing is playing on conspiracy tropes that have been around for decades, if not centuries."

Uscinski said between 5 and 10% of people believe in Q, "depending on how we ask these questions on surveys.

"In many ways, it's actually one of the least-believed conspiracy theories that I poll on, which I think is a good thing. Q has been able to capitalize on a whole lot of beliefs that are already popular out there amongst Americans. So, the idea that there's a 'deep state' is almost a majority belief. Vaccines often poll around 25% to 30% of Americans thinking there's some sort of conspiracy there.

"So, many of the component parts of QAnon on their own poll very well, and are far more popular than QAnon [itself]," Uscinski said.

It used be the case that you had to do a lot of legwork if you were questioning who really assassinated JFK, or who controls global finance. But now the online world leads you on.

Facebook responded this past week by banning QAnon accounts.

Whitney Phillips said, "When you are starting to go down the rabbit hole, as they say, you start clicking around and searching for information about QAnon and the 'deep state,' what happens is that, based on your previous clicks or the previous clicks of people who are deemed to be like you by recommendation algorithms, you start getting fed more and more confirming information – not just about the conspiracy theory you're looking into, but other conspiracy theories as well. Algorithms are feeding you the kinds of things, the kind of diet, it thinks you want to eat."

Cargile said, "As a prospective Congressman, I always want to get to the bottom of the issue. What is actually occurring?"

Cargile, we should point out, is not the only apparent Q supporter running for Congress; there are more than a dozen candidates, almost all Republicans. Many, after showing early signs of support, have tried to distance themselves from Q. That includes Marjorie Taylor Greene, running unopposed in a solidly Republican district in Georgia.  She's almost certainly headed to Capitol Hill.

Thompson asked Adam Kinzinger, a Republican Congressman from Illinois and one of the few in his party to speak out against QAnon, "What will you do if people are elected who believe in the QAnon theory?"

"You gotta push back on 'em," Kinzinger replied. "Everybody has a right to elect whoever they want in their district. If somebody wants to send a QAnon believer out here, it's their right in a representative democracy. But it doesn't mean we have to accept it."

This month, the House passed a resolution condemning QAnon; 17 Republicans voted against it.

Congressman Kinzinger is worried about the effect that QAnon could have on the November 3 election.

Thompson asked, "So, you think that people believing in QAnon could actually destabilize the United States government?"

"The problem is, you don't know something's big and something's too big until it's too big. And it's important to step on this early."

Thompson asked Rep. Kinzinger to indulge us and put one QAnon theory to rest: "So, you're from Illinois. Can I just get you on the record that you don't think Barack Obama is a Satan-worshipping baby-blood drinker?"

"No, I don't think he's a Satan-worshipping baby-blood drinker," Kinzinger smiled. "I disagreed with a lot of his policies, but I think he was a pretty good guy!"

And with that out of the way, we turned back to conspiracy expert Joseph Uscinski who, it turns out, has some personal experience with QAnon:

"I tend to believe that every conspiracy theory has a better than 0% chance of being true, except for this one. And the reason why I know this is because Q has done drops about me, where he suggested that I'm part of a 'deep state' plot to get him. Now, I may not be able to prove to you or anyone else that I'm not a 'deep state' member, but I know that I'm not. And I know that Q is full of baloney, and this is a delusion."