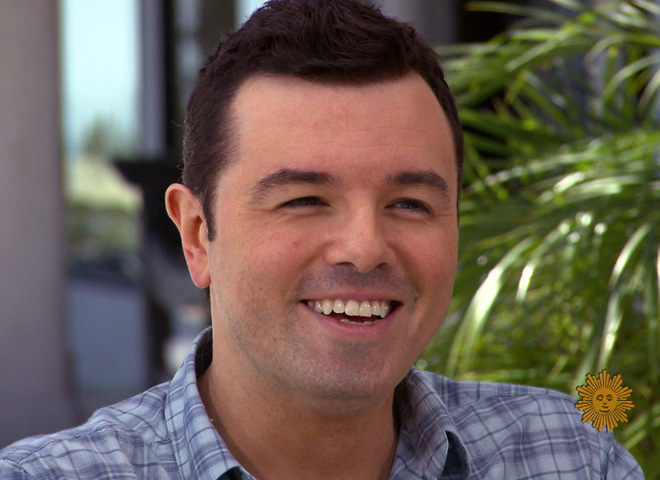 (CBS News) The animated TV hit "Family Guy" is the singular creation of the multi-talented Seth MacFarlane. Busy as he is, he recently agreed to sit down with our Mo Rocca for some Questions-and-Answers:

If it seems like Seth MacFarlane suffers from attention deficit disorder, it's a spectacularly high functioning form of it. He's been successful in every single one of his many endeavors.

"What makes me happy is just keeping my brain challenged and stimulated and on its toes," he said.

"When you're singing, you seem pretty happy," said Rocca.

"When's the last time you took a vacation?"

"Last time I took a vacation was probably about two years ago," he laughed. When asked to describe it, he replied, "I don't remember."

MacFarlane's been rewarded for his hard work. In 2009 he became history's highest-paid TV producer with a $100 million, three-year deal for the three series he created for Fox's primetime lineup: "American Dad," "The Cleveland Show," and the smash hit "Family Guy."

MacFarlane described it as "an animated program about a fictional Rhode Island family that uses the animation medium to satirize everything from pop culture to politics, and is really out to make you laugh with sensibilities high and low."

You may not get the joke. But millions of fans do.

"With your head shaped like that, how was childbirth for your mother?"

Speaking as Stewie, MacFarlen replied, "You know, the initial evacuation was rather difficult," he said.

The series is based on his college thesis project at Rhode Island School of Design. He says he was influenced by Fox's other animation juggernaut, "The Simpsons."

"That's the first sitcom that I can really remember where pop culture references were made on a daily basis. And when you or I go through our day, I mean, how many times do we reference brand names? A lot."

An episode of "Family Guy" can feel like a mash-up of pop culture, with rapid-fire references to showbiz in riffs disconnected from the plot. Characters break into song at random (in one instance, a barbershop quartet informs a man he has AIDS). The fans love the antic quality . . . critics, not so much.

And yet "Family Guy" is the most popular scripted show with men 18-24, a demographic coveted by advertisers.

But MacFarlane says that his brand of humor isn't just for the boys.

"I don't think fart jokes are the exclusive province of men," he said. "I think there are plenty of women who think that stuff's funny. My mother thought fart jokes were hilarious!"

Some of the raunchiest jokes MacFarlane ever heard, he says, came from his mother.

"There was no joke I could make that was too offensive," he said. "I can actually remember at least one time where my mother told me something that, I was like, whoa!"

"Can you repeat it?" Rocca asked. "We'll bleep out whatever we need to bleep out."

"I was, maybe like, seven years old, and I said to the waitress, 'Hey, lady, can I have another Coke?'" MacFarlane recalled. "And my parents got all up in arms: 'That's so disrespectful what you just said.' And I said, 'What? Fred Flintstone calls women 'lady' all the time!'"

Not coincidentally, it was Fred Flintstone that got MacFarlane drawing in the first place.

By age nine he actually had a weekly comic strip called "Walter Crouton" in his Kent, Conn., hometown newspaper. The talent that would propel him to sell "Family Guy" at the age of 23 was evident.

If after 10 seasons MacFarlane is ready for it to end, he's not willing to say. "I guess that's really governed by whether people are watching or not," he said.

"Well, it's also got to be governed somewhat by your enjoyment, right?" Rocca asked.

"That's where it gets kind of hazy, because I what I enjoy are things that scare me a little bit."

Like writing and directing his first feature film. The comedy "Ted" stars Mark Wahlberg as a man who's grown up with his magically-talking teddy bear, voiced by MacFarlane. No, this isn't Winnie the Pooh.

But in a very different vein MacFarlane is using his clout to revive "Cosmos," the late astrophysicist Carl Sagan's landmark series.

"I'm at the point in my career where I can maybe do something good and worthwhile," MacFarlane said. "I'm big on the importance of science, particularly right now at this point in time when there's sort of a systematic rejection of science by a lot of people in America."

In his spare time - what little there is of it -- the single, 38-year-old has dated a string of Hollywood starlets.

"Is there somebody out there you really want to date that you haven't been able to date yet?" Rocca asked.

With so much on his plate, Seth MacFarlane says he's learned to pace himself.

"So you're not going to push yourself to the brink?" Rocca asked.

"No. No, I used to - when I was, you know, my late 20s, I drank a lot. And I drink a lot less these days. I still enjoy a bourbon from time to time, but it's nowhere near as frequent as it once was."

"Oh, yeah, I did hear 'drink.' Well, there you go. You got something extra!" he laughed.