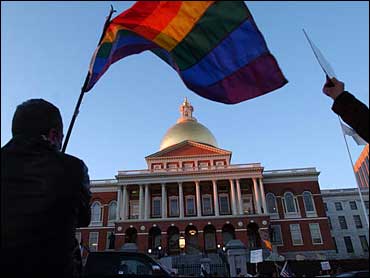 As lawmakers in Massachusetts wrestle with how to word a state constitutional amendment banning gay marriage, President Bush appears to be edging closer to supporting a similar federal measure.

The issue of gay marriage was brought to a head when Massachusetts' highest court ruled that full marriage rights were the only legally appropriate way to deal with gay partnerships.

Opponents of gay marriage in Massachusetts want an amendment to ban it. At a constitutional convention, legislators shot down two compromise proposals Wednesday that would have allowed for civil unions rather than the full-fledged marriages the state's highest court ruled should begin in mid-May.

"We're as divided as the nation on this," said House Speaker Thomas Finneran, an opponent of gay marriage. "We're doing the best we can. We're human beings. Sometimes we come up short."

State lawmakers were to reconvene Thursday to take up what would be a third compromise proposal. If that fails, an outright ban on gay marriage seems likely. Any amendment would ultimately need the approval of voters in a ballot two years from now.

Meanwhile, the president's support for such an amendment on the federal level is apparently a question of when, not if, reports CBS News White House Correspondent Bill Plante.

"What he has said is that, if necessary, he will do what is legally needed to protect the sanctity of marriage," said White House spokesman Scott McClellan. "At this point, we continue to look very closely at this issue. And obviously we'll keep you updated if there are any new developments."

The president's position puts him solidly in the mainstream: 61 percent of Americans oppose legalizing gay marriage, according to the latest CBS News/New York Times poll, conducted in December.

The constitution requires states to recognize the contractual obligations of other states. That's one reason why opponents of gay marriage want a constitutional amendment.

"The issue of marriage is simply an eternal one — that is, one man married to one woman," Rev. Jerry Falwell told the CBS News Early Show. "That has been the basis for marriage for 6,000 years of recorded human history."

"It harms because we're saying to the children, to young people to everyone, that gay is okay," Falwell. "What I'm saying is that if we're going to approve gay marriage, what about polygamy? … What about bestiality, what about incest?"

Cheryl Jacques of the Human Rights Campaign told the Early Show that civil unions are not an acceptable compromise.

"Because gay families like my own, many of whom are raising children, need the very same protections — healthcare, social security survivor benefits, tax laws and inheritance laws — that make any other family strong and help children flourish," she said.

"What you're talking about with this separate system, this concept 'civil union,' is something that is separate and unequal," Jacques said. "Civil unions do not trigger over 1,000 federal benefits and protections other families get."

The debate could become an issue in the presidential campaign.

Massachusetts Sen. John Kerry, the frontrunner to oppose Mr. Bush in November, says he personally opposes gay marriage, prefers civil unions and rejects any state or federal legislation that could be used to eliminate equal protections for homosexuals or other forms of recognition like civil unions.

He was one of only 14 senators to oppose the 1996 federal Defense of Marriage Act that allowed states to disregard gay marriages from other states. And two years ago, Kerry signed a letter with fellow members of Congress urging the Massachusetts Legislature to drop a proposed ban.

In Massachusetts, a key issue is what to do after May 17, when gay couples presumably could exchange vows. Would they have their marriage licenses revoked if voters ultimately approve a constitutional ban two years later?

"I don't think we can do that. I think if someone enters into a marriage on May 17, it's a marriage and there's no constitutional provision that can undo that," Rep. John Rogers said.

If gay marriage takes place in Massachusetts, federal lawsuits would likely ensue as gay couples seek recognition in other states. Thirty-eight states and the federal government have approved laws or amendments barring the recognition of gay marriage.