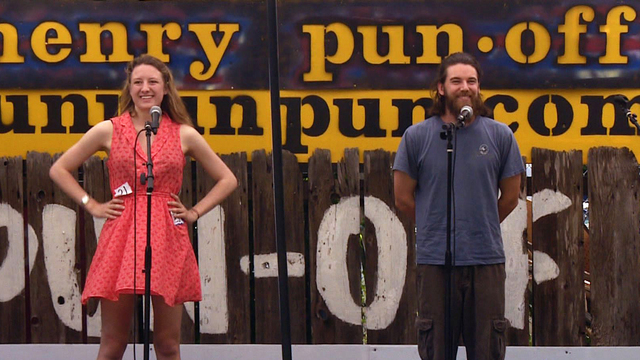 "No pun intended" is a phrase we hear a lot, but as Lee Cowan found out, there's an annual gathering in Texas where puns are not only intended, they're encouraged -- and so are the groans:

The signs on the way to Austin, Texas, should have been fair warning. The "O. Henry Pun-Off" meant that a gaggle of word-nerds was just ahead.

"In Egypt I started having terrible joint pains, so naturally I went to see a CAIRO-PRACTOR."

"I know the DRILL. It's the same ol' BIT every year," said Gary Hallock, who organizes the annual migration of this strange breed. He's a proud punner himself, or as he puts it, "a linguistic terrorist."

"Roofing screws. Got 'em from my dog house. Roof roof."

Even before the competition started, he was punning around like crazy. He just can't help himself, as when he walked past a picket fence: "You know what they say, if you picket, it'll never heal."

He's afflicted, he admits. But so is everyone at the O. Henry Pun-Off. For the past 37 years they've gathered behind the famous author's house to twist the English language into a pretzel.

"I flushed my CD down the toilet. It was WHIRLED music."

Matt Pollack says it's as much a support group as a competition: "This is the only place I know of, the one day of the year, where people with similar afflictions as me can all get together and have a crowd of hundreds of people that not only will accept it, they will cheer for these puns! They will come out here in the sun, on a hot Austin day, and say, 'I want to hear this!'"

In layman's terms, a pun is a play on words and their meaning. For instance:

"I'm so glad I could be EAR today. I just LOBE talking to you a lot."

You might have guessed the event is pretty quirky.

"In Romania I made hotel reservations. I was so tired I had to BUCHAREST."

Darren Walsh flew here all the way from London to ply his puns in a chicken suit. "This is probably the weirdest thing I've ever done," he said.

Punsters shunned elsewhere are here welcomed with open arms. "Yeah, it's a safe space," said Alexandra Petri. "It's where you can come and be among your kind."

Petri, who hails from the wordsmiths at the Washington Post, thinks puns spring from a love of language. "Puns are sort of the ultimate word romance," she said. "Sort of awkward the next morning, you're like, 'What just happened? That was gross.' But you know, it's a beautiful thing in the moment!"

"Nothing makes me SYCAMORE than some guy using all those cheezy pickup lines like a DOGWOOD."

Cowan asked Ziek, "So, do you think you were born to do this?"

"Oh, I hope so!" laughed Zeik. "If not, then something's really wrong with me!"

Ben's talent is that he can pun on cue.

For example, on baseball: "Well, I don't know if you're REGGIE, JACKSON."

Mexican food: "I never eat in the restaurant, I always get it TA-CO."

Charles Osgood: "Well, he's OS-GOOD as it gets!"

There are two verbal bouts here: The first is Punniest of Show -- a string of prepared puns stitched together in sort of a punner's short story.

Alex took home the trophy in that category, after punning every U.S. president in order:

CAN A D student win? Sure. LYNDON JOHNSON was a D Student and he was great: NIXING dumb ideas like turning a FORD CAR TO a RAY-GUN. No, when BUSH comes to shove, I see hope GLINT ON the horizon. Ladies, I DUB YA the hope of America, and I don't say, 'OH, BUMMER.'

Spectators found themselves -- surprisingly -- not annoyed. "I wasn't sure if it was gonna be just like one liners, and how is that sustainable?" said writer Jennifer Gandin Le. "I like the stories. People are really weaving some interesting stories and then using really, really silly puns. Like, I'm impressed."

Then came round two: the Pun Slingers competition. It's a duel with two contestants firing off puns at one another on a subject pulled at random, like vision:

"So I've got a little kitty at home, and every time I make a loud noise the CATARACTS."
"Wow, what a great PUPIL."
"IRIS to the occasion."

... until they simply run out of word ammo.

It was a long afternoon filled with groans (which, by the way, don't discourage anyone here).

"You get a groan, that's how you know it's landed," said Petri.

In the end, Matt Pollack won -- apparently the only contestant with more puns than pride.

So, does victory give him punning bragging rights all year? "Oh, fame, fortune and glory forever, you know?" he laughed. "Honestly this goes on a shelf in my house and for the rest of the year, I'm basically not allowed to pun."

Whose rule is that? "Mine," Pollack said. "Because I like being accepted socially!"

With the competition ended, punsters are left with nothing to do -- but wait for next JEER.

Orecchiette: The art of pasta