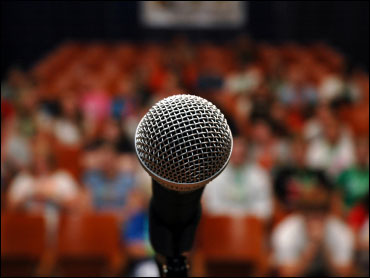 MILWAUKEE - A Wisconsin man has earned bragging rights as the champion liar of 2010 with this line: "I almost had a psychic girlfriend but she left me before we met."

David Milz, 49, told The Associated Press he came up with the one-liner over the summer when he was joking around with colleagues. He thought it might be good enough to win the Burlington Liars Club's annual contest, but the call he received Wednesday was still a surprise.

"I was just shocked when I heard I won," the Bristol man said. "Hey, it's a resume builder."

The liars' club started in 1929 as a lighthearted way to honor the creativity and humor of good exaggeration. A lifetime membership costs $1, but anyone can submit fibs for free.

About 500 entries came in this year from around the country, with most from the Midwest, club vice president Ed Impens said. He and two other judges sifted through the entries this week and each made a Top 10 list.

Milz's entry was the only one that made all three lists, Impens said.

"It had all three of the things we think are important: It's fairly short, humor is very important, and it's timely," he said.

The runners-up include this line from Ellen Everts of New London: "My luck is so bad that if I bought a cemetery, people would stop dying."

And Daryl Lockwood of Waupaca submitted this: "My neighbor's scarecrow was so good that the crows brought back the corn they stole last year."

The liars' club is based in Burlington, a town of about 15,000 about 35 miles southwest of Milwaukee. It has almost 2,500 members around the world, president Joel Weis said.

Milz is the superintendent of an elementary and middle school district in southeastern Wisconsin. He said he wasn't worried that his lying might encourage students to stretch the truth themselves.

"I'm going to work it the other way - 'You can't pull wool over the eyes of a champion liar,'" he joked.