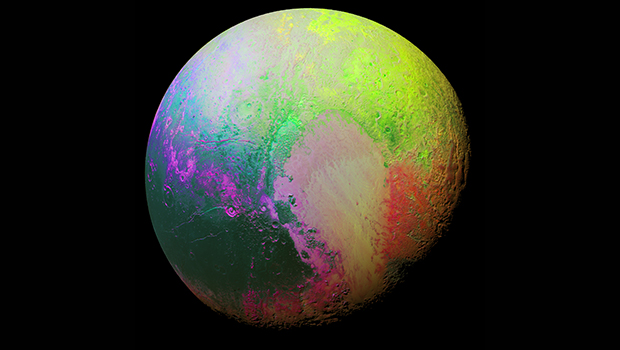 The data used to create this image were collected by New Horizon's Ralph instrument and Multi-spectral Visible Imaging Camera (MVIC) on July 14, just as the spacecraft made its historic flyby of the distant body. Ralph is the craft's primary tool for investigating the surface composition on Pluto and its moons. MVIC has filters that are sensitive to coloration caused by materials like tholins, which are broken down as they fall from the high atmosphere, dusting the surface in reddish hues.

The false color image puts into stark relief the difficult to see, but distinct color boundaries of the two halves of Tombaugh Regio, affectionately known as Pluto's heart, seen here:

The image was presented this week at the Division for Planetary Sciences meeting of the American Astronomical Society in National Harbor, Maryland.