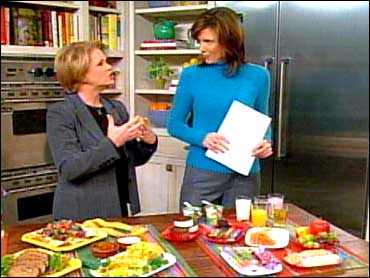 Childhood obesity is one of the most troubling health problems facing this country. Recent studies say that 16 percent of children and teenagers in the U.S. are overweight, and those numbers are going up.

So Weight Watchers has published a new book with basic guidelines for families. The book is called "Weight Watchers Family Power: 5 Simple Rules for a Healthy-Weight Home."

She is a co-author of the book and points out that parents are the role models for their children, so if parents incorporate healthy eating habits and a healthy lifestyle into the home, children will follow suit.

That won't be as hard as it sounds.

"Kids are very amenable to the idea of switching to whole grains," Miller-Kovach

told co-anchor
Hannah Storm. "Parents think their kids won't eat them, but they do."

When cooking with ground meat, use 93 percent fat-free beef.

Look for reduced-fat cheeses; baked chips, rather than fried; and low-fat or non-fat milk.

Be sure to include some healthy oils. Miller-Kovach says kids and adults both need the fatty acids and vitamin E from ingredients like canola oil or olive oil.

Try to include five servings a day of fruits and vegetables — one tablespoon for each year of age.

By focusing on simple, less-processed food, you're getting fewer calories. People believe it's going to take longer to prepare and cook healthy meals, but the truth is that it doesn't take longer.

Rule No. 2: Include treats
This is important because treats are part of life and they give people pleasure. Miller-Kovach says when you deprive children of treats, kids desire them even more — and are more likely to overeat them when they are available if they don't have access to them at home.

But be sure to stick to reasonable amounts. If you opt for candy bars, for instance, be sure to buy regular-size bars, not king-size ones.

Snacks are important, too. "Most kids do need snacks because their stomachs aren't big enough to hold all the food that they need in meals," she says. "What we're talking about for snacks are the wholesome, nutritious foods."

Rule No. 3: Limit screen time to two hours or less per day
Screen time includes television, video games, computers and DVDs. Miller-Kovach says there is a definite connection between how much time kids sits in front of a screen and how likely they are to be overweight.

Also, grownups should not keep a TV in their rooms if they don't want one in their kids' rooms.

Rule No. 4: Try to be active for an hour or more each day
The easiest and most effective strategy to get children to move around more is simply to turn off the screens.

Being physically active does not mean just sports or exercise programs. Miller-Kovach says games such as Twister can do the trick. Other favorites are activities such as Frisbee and jumping rope.

Rule No. 5: The rules apply to everyone in the home
You, as the parent, are a role model. Miller-Kovach says children need support physically and emotionally in order to keep their bodies at a healthy weight. It's important that everyone — children, parents and caregivers — eat the same foods. Whenever possible, try to eat together as a family.

Many parents complain about their kids being picky eaters. But the truth is that children need repeated exposure to a new food — sometimes 8 to 12 times — before they'll decide it's OK. Just because children reject a food once or twice doesn't mean they'll never eat it.

Most of all, try to be consistent in these healthy changes. If you don't want to make too many changes, pick a few but make sure you stay committed to them.