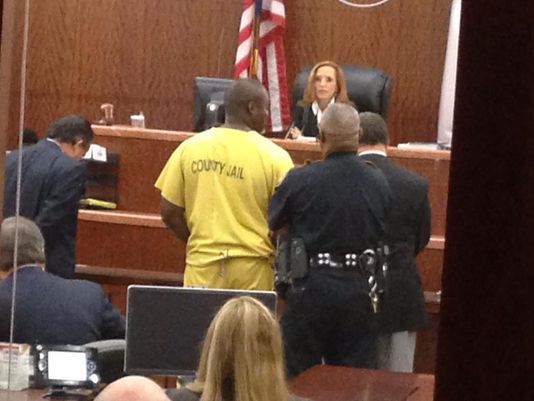 HOUSTON -- A man charged with killing a suburban Houston officer first shot the 10-year veteran in the back of the head and fired a total of 15 times, authorities said Monday.

Shannon J. Miles, who is charged with capital murder, appeared briefly in state District Court in handcuffs and shackles. The 30-year-old Houston resident said very little, other than to answer the judge's questions. He is being held without bond and has two court-appointed attorneys; neither spoke to reporters directly after the hearing.

Harris County District Attorney Devon Anderson would not comment on a motive to reporters. This weekend, Sheriff Ron Hickman said the attack was "clearly unprovoked," and there is no evidence that Goforth knew Miles. "Our assumption is that he (Goforth) was a target because he wore a uniform," the sheriff said.

Anderson read the probable cause statement in court, saying that police first received a call at 8:20 p.m. Friday. When authorities arrived at the gas station in the Houston suburb of Cypress, they found Deputy Darren Goforth, a 10-year veteran of the force, face-down. He was already dead, she said.

Surveillance video from the gas station shows that Goforth, 47, had just come out of a convenience store after he had pumped gas and that Miles got out of his red truck, she said.

Goforth was shot 15 times and a witness saw the shooting, Anderson said. She added that the shell casings match the .40-caliber Smith and Wesson handgun found at Miles' home.

The killing evoked strong emotions in the area's law enforcement community, with Hickman linking it to heightened tension over the treatment of African-Americans by police. Goforth was white and Miles is black.

The nationwide "Black Lives Matter" movement that formed last year after 18-year-old Michael Brown was shot and killed by a white police officer in Ferguson, Missouri, has sought sweeping reforms of policing. Related protests erupted in Texas recently after a 28-year-old Sandra Bland, a black woman, was found dead in a county jail about 50 miles northwest of Houston three days after she was arrested on a traffic violation.