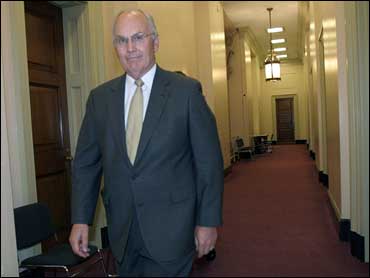 The prosecutor who brought charges against Sen. Larry Craig in an airport sex sting says he told the Idaho senator that he should hire an attorney, according to court papers filed Monday.

Prosecutor Christopher Renz, in a motion opposing Craig's request to withdraw his guilty plea, wrote that he spent considerable time in a July 17 conversation telling the Idaho senator how the legal process would work if he chose to plead guilty.

"The defendant told Mr. Renz that he felt he was in a difficult situation as the result of the public office he held, in response to which Mr. Renz said that he appreciated that difficulty and for that reason the defendant should consult with an attorney," Renz wrote.

Craig, R-Idaho, did not, and eventually pleaded guilty to misdemeanor disorderly conduct. He has since said that he was panicked into admitting to a crime he did not commit. A Hennepin County judge is set to consider Craig's request on Wednesday.

Renz wrote that Craig had plenty of time between his June 11 arrest and Aug. 1, when he signed a plea petition, to think about the consequences of pleading guilty and whether he had actually committed a crime in the airport bathroom.

Craig's arrest and guilty plea weren't reported in the news media until Aug. 27. On Sept. 1, Craig announced plans to resign by Sept. 30. He later suggested he might stay in the Senate if he could successfully overturn his plea.

Renz wrote that Craig didn't decide to withdraw his plea until after he was hurt by the publicity of the allegations. Denying his motion "prevents further politicking and game playing on the part of the defendant in relation to his plea," Renz wrote.

Craig clearly "had hoped that he could plead guilty and that the plea would not be discovered by the media or public," Renz wrote. "The defendant chose to plead guilty and consciously took that risk. The defendant's current pursuit of withdrawal of his guilty plea is reactionary, calculated and political."

Judy Smith, a spokeswoman for Craig's lawyer, Billy Martin, said, "Our response to the prosecutor's motion will be in court."

Craig was arrested by an undercover police officer in a sting in an airport bathroom known as a meeting place for anonymous sex. The officer alleged Craig peered into his stall, slid his foot under a divider to touch the officer's, and swiped his hand under the divider as a signal that he was soliciting sex. In a plea bargain, Craig admitted to disorderly conduct and paid $575 in fines and fees. A gross misdemeanor charge of interfering with privacy was dismissed.

According to the prosecutor's filing, Craig called Renz several times as the case proceeded, starting even before charges were filed.

In a June 25 call, Craig asked Renz how the case would proceed. Renz wrote in an affidavit that he told the senator that if his criminal record was clean, he would probably be able to plead guilty to disorderly conduct with the other charge being dismissed.

Craig never appeared "to have a tone or sense of urgency, panic or overt emotion," Renz wrote in an affidavit.

Renz also wrote that Craig should not be able to claim he was ignorant about his guilty plea. Craig has a college degree, has served in Congress for 30 years, and has sponsored or co-sponsored at least 10 bills that dealt with criminal law, Renz wrote.

Renz warned of a "deluge" of defendants who would ask to withdraw guilty pleas if Craig succeeds. The prosecutor said his office was contacted by a defendant trying to withdraw his plea soon after Craig announced that he regretted pleading guilty.