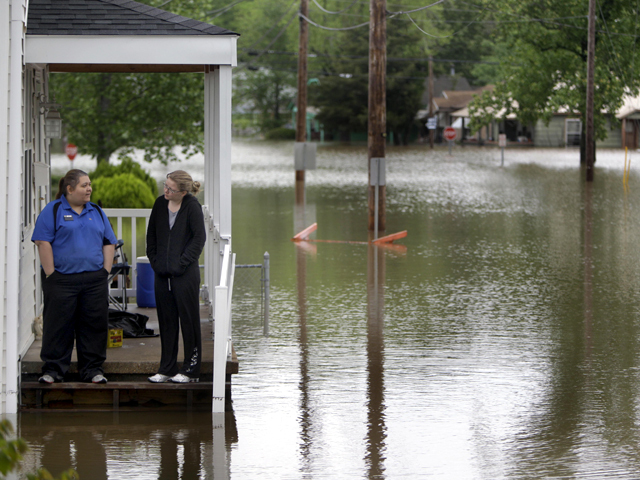 MEMPHIS, Tenn. - The U.S. Army Corps of Engineers has put off making a final decision on a controversial plan to intentionally breach a levee protecting valuable farmland from the rising Mississippi River.

The agency made the announcement Tuesday in Memphis following a teleconference and decided to put off a formal decision on the plan until at least Wednesday, when it was scheduled to meet again on the issue.

The corps wants to intentionally break the levee at Birds Point, Mo., in order to relieve upstream pressure on a different levee protecting the Illinois town of Cairo.

Though the corps tabled its plans, it nonetheless announced it was still moving equipment needed to execute the break into position along the levee.

Missouri Gov. Jay Nixon opposed the plan, which would soak 130,000 acres of farmland — an area stretching 30 miles north to south and as much as 8 to 10 miles wide.

The state attorney general filed a lawsuit Tuesday in federal court seeking to block the demolition, arguing that the floodwaters could damage 100 homes and leave behind a layer of silt that could take a generation to clear.

Floodwaters threatened earthen levees protecting thousands of homes in the nation's midsection Tuesday, rising so fast in some places that panicked residents didn't have time to pile up sandbags.

Storms have unleashed more than a foot of rain across the region, and the forecast offered little hope for relief. Another, larger storm system was brewing along the same path, bringing several more days of rain and the possibility of tornadoes.

The greatest flooding threat loomed in the southeastern Missouri community of Poplar Bluff, a town of 17,000 residents about 130 miles south of St. Louis. Six inches of rain fell Monday alone, bringing the four-day total to 15 inches.

By midday, the deluge had caused the Black River to pour over a levee in 30 places. The flood wall extending from Poplar Bluff to the town of Qulin downstream was also breached in at least one place, allowing water to gush through a hole.

"Each heavy downpour, each hour that passes by with the water pushing on that levee, the likelihood of a failure is that much more possible," said Deputy Police Chief Jeff Rolland, calling it was a "miracle" that the first hole did not develop until late morning.

In another area near the confluence of the swollen Mississippi and Ohio rivers, authorities debated a desperate plan to blow up one levee to ease the pressure on others.

Butler County Sheriff Mark Dodd said the water pouring through the levee was unlikely to make it far enough upstream to add to the threat facing Poplar Bluff, where about 1,000 homes had already been evacuated. But authorities planned to evacuate more homes closer to the breach, which was in a sparsely populated area.

Terry Jones went to St. Louis over the weekend to attend her sister's funeral. By the time she returned to Poplar Bluff, her home was flooded.

"By the time I got out there, water was over my porch," said Jones, a 51-year-old retiree. "My front room is messed up. I don't know about the bedrooms because I couldn't get in."

Jones, who lives with her 12-year-old granddaughter, said she has nowhere to go if her house becomes uninhabitable.

Despite the punishment the region has already endured, the weather was expected to get worse — and soon. A second system moving through Oklahoma and Texas carried the same threat of tornadoes and flooding but over a broader area that stretched from Dallas to Louisiana and up to Memphis.

Greg Carbin, the warning coordination meteorologist for the National Weather Service's Storm Prediction Center in Norman, Okla., said having two such storms in such rapid succession is unusual.

"It's basically in the same place for two days in a row. That doesn't happen very often. Such rapid succession doesn't give any time for a break," Carbin said.

In 2008, flooding damaged or destroyed hundreds of homes in Poplar Bluff, raising doubts about whether the levee was capable of protecting the town during heavy rain. A federal inspection gave the levee a failing grade, and the private district that maintains it has been unable to make repairs.

The storm system dumped heavy rain on seven states and spawned at least one tornado Monday in Arkansas. The twister killed four people and blasted a path of destruction through the town of Vilonia, 25 miles north of Little Rock. Four others died in floods.

On Tuesday, the National Weather Service sent survey teams to Vilonia and nearby Garland County to investigate the damage and assess how much of it was caused by tornados or straight-line winds.

"It wouldn't surprise me if we were to end up with a count of 10 or 12 tornadoes by the time all the surveys are completed," said John Robinson, another weather service meteorologist.

In Mississippi, authorities said a 3-year-old girl was killed when a storm toppled a tree onto her home.

Governors in Arkansas and Kentucky declared states of emergency. In the sleepy town of Smithland, Ky., residents fled their homes Tuesday while hundreds of volunteers piled sandbags along the riverfront. The water was rising 6 inches a day.

Back in Poplar Bluff, street department workers stood guard at a handful of trouble spots on the levee, monitoring water seepage.

The water in some streets and driveways was actually going down — a result, police said, of the levee break downriver relieving some pressure.

Many homes were empty. Because most families had fled the flood plain, much of the activity in town Tuesday involved sightseers coming in for a look at nature's show.

If the Poplar Bluff levy were to fail entirely, the rushing floodwaters could destroy or severely damage 500 homes and potentially displace some 7,000 people in the surrounding flood plain, authorities said. Already, 23 small businesses have taken on water.

Families forced to leave their homes Monday watched as murky floodwaters crept into their yards. Sandbagging wasn't an option in many places because the river simply rose too quickly.

"By the time we realized what was happening, it was too dangerous to sandbag," Butler County Presiding Commissioner Ed Strenfel said.

Hotels filled up, and more than 250 people took shelter at the Black River Coliseum, the town's 500-seat concert venue.

Dozens of green cots lined the floor of the arena. A few people had air mattresses. One man strummed a guitar. Others read the paper. Small children chased each other between the cots.

"Once this is over, I'm probably moving," said Frank Christy, a 27-year-old construction worker taking shelter with his three children, ages 3 to 5.

Nixon, who toured the area by helicopter, knew that many of the displaced face a long road to recovery.

"People are out of their homes. They're losing their possessions. It's going to be a huge challenge," the Missouri governor said.

Neighboring towns are suffering, too.

Melissa Porter, city clerk in nearby Neelyville, said 30 people fled from the flood. Sewage was backing up into streets, and looting was reported in vacant homes.

The Missouri National Guard sent 200 guardsmen and rescue equipment to the area. Several people had to be rescued by boat.

Poplar Bluff Police Chief Danny Whiteley had hoped that flooding would be mostly limited to basements. But he wasn't optimistic.

"I guess you'd call it a perfect storm: It's just all come together at once," Whiteley said.