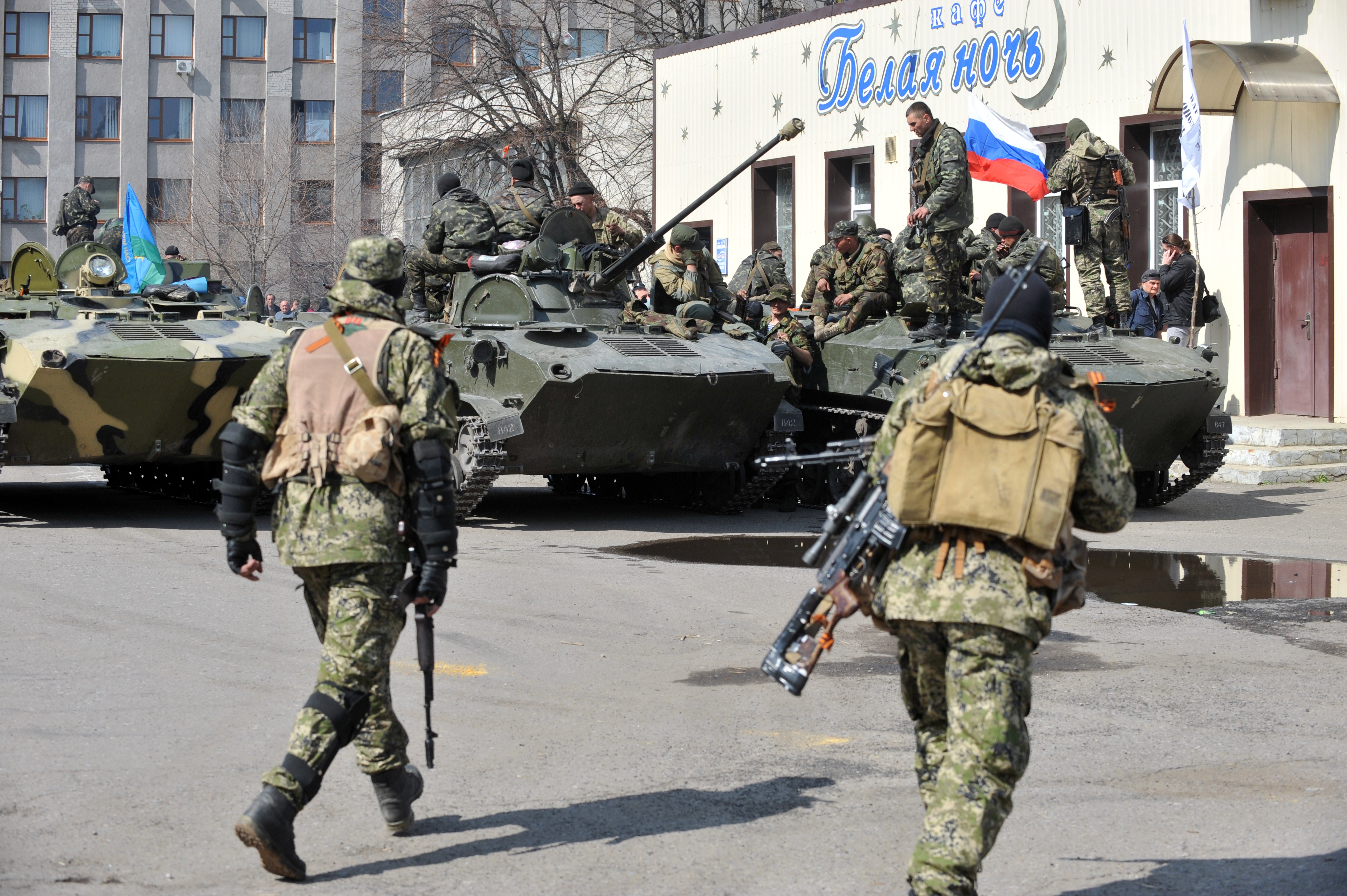 The Ukrainian soldiers manning the vehicles offered no armed resistance, and masked pro-Russian militias in combat fatigues sat on top as they drove into the eastern city of Slavyansk, a hotbed of unrest against Ukraine's interim government.

In Brussels, NATO announced it was immediately strengthening its military footprint along its eastern border - which often lies next to Russia - in response to Russia's aggression in Ukraine. The leaders of Russia and Germany, meanwhile, talked about the turmoil in Ukraine but came to very different conclusions, their offices said.

CBS News correspondent Holly Williams reports from Slavyansk, where both sides are putting on a major show of force, that the militants have popular support from many Russian-speaking Ukrainians who claim they're discriminated against by their own government.

"We're fighting for ourselves and for our land," one man told CBS News. "Do I look like a terrorist to you?"

At a checkpoint in Konstaninovka, CBS News found pro-Russian protesters passing out leaflets Wednesday that were written to look and read like a declaration of independence by the people of the Donetsk region. The leaflets congratulate the people on the founding of the "Republic of Donetsk."

Williams reports that such a scenario is exactly what Ukraine's leaders are trying to prevent - but in spite of repeated threats that the Ukrainian military was carrying out widespread operations to oust the militants, using force against the well-armed pro-Russian forces would be a huge risk; it could provoke a military intervention from Russia, which has condemned Ukraine's actions as criminal.

The fear is a repeat of what happened in Crimea last month when separatist demonstrations were used as a pretext for thousands of Russian soldiers to move in and then formally annex the region.

Insurgents in Slavyansk have seized the police headquarters and the administration building, demanding broader autonomy for eastern Ukraine and closer ties with Russia. Their actions have been repeated in at least eight other cities in eastern Ukraine - and the central government says Moscow is fomenting the unrest.

One of the Ukrainian soldiers said they had defected to the pro-Russian side - which raises the specter of an uprising led by disgruntled Ukrainian forces. But an AP journalist overheard another soldier suggesting they were forced at gunpoint to hand over the vehicles.

"How was I supposed to behave if I had guns pointed at me?" the soldier, who did not identify himself, asked a resident.

The military said "the whereabouts of the Ukrainian servicemen" were not yet known. The Interfax news agency quoted Miroslav Rudenko, one of the insurgent leaders in Slavyansk, as saying the soldiers will be offered the chance to join a local militia or leave the region.

Eastern Ukraine was the support base for ousted President Viktor Yanukovych, who fled to Russia after months of protests over his decision to reject closer relations with the European Union and turn instead toward Russia.

Reflecting the West's concern over the turmoil in Ukraine, German Chancellor Angela Merkel called Russian President Vladimir Putin to discuss the situation and preparations for diplomatic talks Thursday in Geneva on Ukraine.

The Kremlin said Putin told Merkel that "the sharp escalation of the conflict places the country in effect on the verge of a civil war." Merkel's office said she and Putin had "different assessments" of the events in Ukraine.

NATO Secretary General Anders Fogh Rasmussen, meanwhile, said NATO will respond to what he called Russian aggression in Ukraine. NATO aircraft will fly more sorties over the Baltic region and allied ships will deploy to the Baltic Sea, the eastern Mediterranean and elsewhere if needed.

"We will have more planes in the air, more ships on the water and more readiness on the land," Fogh Rasmussen told reporters in Brussels.

NATO says Russia has up to 40,000 troops stationed near its border with Ukraine. Western nations and the new government in Kiev fear that Moscow will use unrest in eastern Ukraine as a pretext for a military invasion.

Ukraine is not a NATO member but several NATO members - Lithuania, Latvia, Estonia and Poland - all border Russia. NATO members Bulgaria, Romania and Turkey also border the Black Sea along with Russia and Ukraine.

In Slavyansk, a Ukrainian city 100 miles from the border with Russia, the armored vehicles stopped near a government building and flew Russian flags while residents chanted "Good job! Good job!"

One of the men on them, who identified himself only as Andrei, said the unit was part of Ukraine's 25th Brigade of Airborne Forces and they had switched to the pro-Russian side.

"Our bosses made the decision and we obeyed," he said.

His statement couldn't be independently confirmed.

Some onlookers were happy with the pro-Russian forces.

But Tetyana Kustova, a 35-year-old sales clerk, was appalled by the unrest.

"They are pushing us toward Russia," she said. "They are tearing Ukraine into pieces."

Later Wednesday, in Pchyolkino, a town south of Slavyansk, tensions boiled over as several hundred residents surrounded 14 Ukrainian armored vehicles. Fearing the troops were sent to quell them, the crowd refused to let the vehicles leave despite the pleas of a Ukrainian officer. The crowd was later reinforced by pro-Russian gunmen.

To end the standoff, leaders in the crowd told Lt. Colonel Oleksandr Shvets they would let his 100-strong troops go if they handed over the magazines from their assault rifles. The soldiers took the magazines off, put them in plastic bags and gave them to the pro-Russian insurgents.

"We are really tired of all of this confusion," said Sgt. Dmytro Mokletsov. "It's really scary giving away the magazines. We have no weapons now. But we were told to, it was an order."

The column of APCs was preparing to leave the area Wednesday evening.

In the eastern regional capital of Donetsk, armed militias seized the mayor's office, demanding that the Kiev government hold a vote on giving the east more autonomy.

"We have come into this building so that Kiev accepts our demands, the demands of the ordinary people of Donbass, to adopt a law on local referendums," said militiaman Alexander Zakharchenko.

"Russia has got a new export now, apart from oil and gas: Russia is now exporting terrorism to Ukraine," Yatsenyuk told a Cabinet meeting. "Russia must withdraw its sabotage groups, condemn terrorists and liberate all administrative buildings."

Russian markets have been rattled by the tensions between Moscow and Ukraine, where Russia annexed the Black Sea region of Crimea last month.

The Russian economy slowed sharply in the first three months of the year as spooked investors pulled money out of the country.

Russian Economy Minister Alexei Ulyukayev told parliament that growth was only 0.8 percent in the first quarter - far short of the ministry's earlier prediction of 2.5 percent - because of "the acute international situation of the past two months" as well as "serious capital flight."

The main stock index in Moscow tanked 10 percent in March, wiping out billions in market capitalization. In the first three months of 2014, the ruble lost 9 percent against the dollar, making imports more expensive, while spooked investors pulled about $70 billion out of the country - more than in all of 2013.