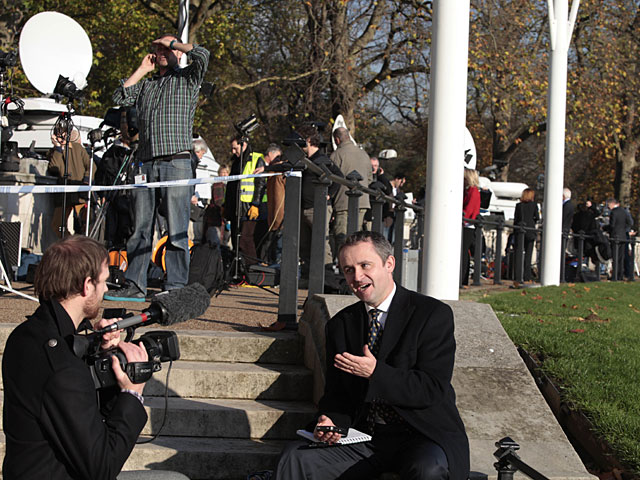 NEW YORK (CBS) If the media frenzy that followed today's announcement of the engagement of Britain's Prince William to his longtime girlfriend Kate Middleton is any indication, their wedding next year will be the most watched event in all of history.

"Today's news will be greeted with huge interest and excitement and we very much hope we will be able to broadcast the service to the U.K. and the world," a BBC spokesman told The Hollywood Reporter. "If that is the case, there is no doubt the wedding will be enjoyed by one of the biggest audiences in history."

The TV audience for the wedding of William's parents, Prince Charles and Princess Diana, came close to 1 billion and the prince's 2011 wedding is expected to vastly exceed that.

Already, media had been gathering in London to cover the engagement. Eriica Hill will anchor "The Early Show" for CBS from outside Buckingham Palace on Wednesday, Nov. 17. She plans to cover all aspects of the engagement of Prince William to Kate Middleton, including public reaction to the announcement and the history of royal weddings. Harry Smith and Maggie Rodriguez will co-anchor the broadcast from New York.

According to The Hollywood Reporter, the surprise announcement had networks around the globe ripping up their schedules and dispatching staff to Britain. In the U.K., Sky News and the BBC had camera crews outside the Middleton family home in the Bucklebury suburbs.

The crush of reporters outside Clarence House, the residence of Prince Charles, and St. James Palace, the London base of Prince William and Prince Harry, required police to set up barriers. Both the BBC and Sky news are planning primetime programs on the engagement tonight.

Prince William and Kate Middleton are Engaged
Who Is the New Princess-to-Be?
Two Royal Weddings in One Season
Which Royal Title for Kate? Timing of Wedding Is Crucial
Kate Middleton Has Princess Diana's Ring
A Look Back at Charles and Diana's Wedding
Engaged William and Kate Make Public Debut
Prince Harry Was First to Congratulate His Brother Royal Engagement Announced on Twitter