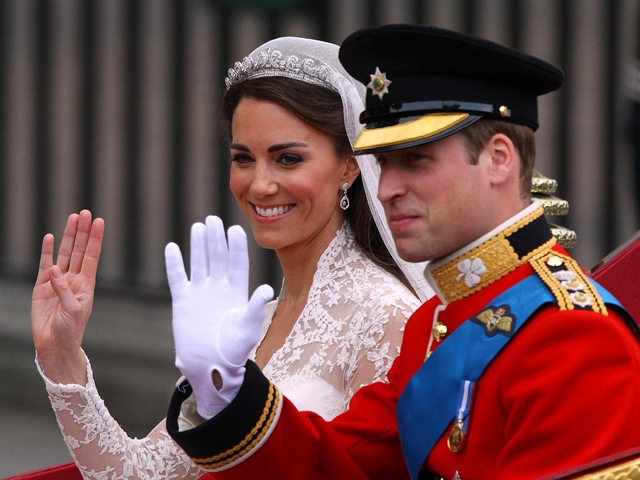 LONDON - An elegant, tiara-bedecked Kate Middleton swept down the aisle to marry Prince William at Westminster Abbey as fans packed the streets of London, hoping to snatch a glimpse of a historic royal wedding expected to revitalize the British monarchy.

Some 2 billion people across the globe were believed to have tuned in as the future king and queen of England started their lives as husband and wife with the two simple words "I will." The couple looked nervous but happy and recited their vows without stumbling before Archbishop of Canterbury Rowan Williams.

An hour and 9 minutes after the ceremony began, the royal couple emerged from Westminster Abbey (video) and climbed aboard an open-top, horse-drawn State Landau carriage. The sound-track to the event changed from wedding music to a fervent full-peel of the bells from within the ancient Abbey's tower, as the pair was pulled away to wave to supporters lining the roads.

Throngs cheered the couple and waved British flags along the entire route, until the carriage disappeared within the walls of Buckingham Palace.

A million well-wishers — as well as some protesters — flooded into the areas surrounding Buckingham Palace, Westminster Abbey and other London landmarks. Crowds were up at dawn waving flags for television cameras under steely gray skies and cool temperatures. Cheers erupted as huge television screens began broadcasting at Trafalgar Square and Hyde Park.

"Will, it's not too late!" said one sign held aloft by an admirer dressed as a bride.

Middleton's ivory wedding gown with lace applique was designed by Sarah Burton at Alexander McQueen, while her hair was half-up, half-down and decorated with a tiara. William wore the scarlet tunic of an Irish Guards officer, sending a strong signal of support for the armed forces and reinforcing his new image as a dedicated military man.

Against all odds, the sun came out as Middleton emerged from the Rolls-Royce in her wedding gown.

William and Kate received their first royal wedding present from the queen on Friday: the titles duke and duchess of Cambridge (video). Kate's full title will be Her Royal Highness the Duchess of Cambridge, or Princess William of Wales - she will not be referred to as Princess Catherine.

The iconic abbey was airy and calm, the long aisle leading to the altar lined with maple and hornbeam trees as light streamed in through the high arched windows.

Video: Kate walks down the aisle

Plumage of Amazonian variety filled the cavernous abbey as some 1,900 guests filed in, the vast majority of women in hats, some a full two feet across or high. Some looked like dinner plates. One woman wore a bright red fascinator that resembled a flame licking her cheek. A BBC commentator noted there were some "very odd choices" in fashion walking through the abbey door.

All the clamoring over every detail — the wedding dress, her hair, their titles, the romantic kiss on the balcony, the honeymoon — was finally being answered. But the biggest question won't be resolved for years: Will this royal couple live happily ever after?

After the church ceremony, the royal-couple will travel from the abbey to Buckingham Palace in an open-topped carriage for two parties, one hosted by the queen for 650 guests, and an evening dinner dance for 300 close friends.

Queen Elizabeth II and her husband Prince Philip have promised to go away for the evening, leaving the younger royals free to party the night away- and Harry to make his best man's speech away from his octogenarian grandparents' ears.

Hundreds of street parties were underway as Britons celebrated part of the heritage that makes them unique — and overseas visitors come to witness traditions they've admired from afar.

The celebration was British to the core, from the freshly polished horse-drawn carriages to the sausages and lager served at street parties. Some pubs were opening early, offering beer and English breakfasts — sausages, beans, toast, fried eggs and bacon.

A number of famous people were left off the guest list, including President Barack Obama and Britain's last two prime ministers, Tony Blair and Gordon Brown, in a snub to their Labour Party, which is not as strong a backer of the monarchy as the ruling Conservatives. The invitation for Syria's ambassador was rescinded because of Britain's unhappiness with the bloody government crackdown there.

"It's very exciting," Prime Minister David Cameron said before he entered the church. "I went on to the mall last night and met some people sleeping on the streets. There's a sense of excitement that you can't really put a word to ... It's a chance to celebrate."

The royals fervently hope that a joyous union for the second-in-line to the British throne will rub out the squalid memories of his parents embarrassing each other and the nation with confessions of adultery as their marriage slid toward divorce.