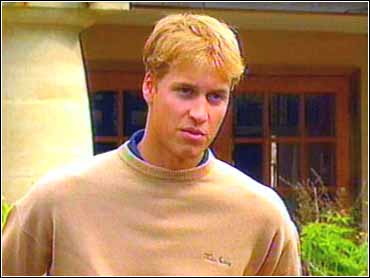 Looking relaxed and confident while talking about his plans at a news conference, Britain's Prince William said on Friday that he felt "upset" by a new book which portrays his late mother, Princess Diana, as a scheming liar.

"Of course, Harry and I are both quite upset about it—that our mother's trust has been betrayed and even now she is still being exploited," William said during a rare royal question-and-answer session with the news media.

The 18-year-old "action man prince," second in line to the throne, also disclosed that he plans to join an expedition to Chile before going to university, reports CBS News Correspondent Kimberly Dozier.

William has just returned from the island of Rodrigues in the Indian Ocean where he was involved in marine conservation projects.

The young prince told reporters that he and his 16-year-old brother Harry took exception to the book by Diana's former private secretary, Patrick Jephson, which accused the royal family of turning the princess into a "scheming rebel."

"But I don't want to say any more on that," William said.

Royal watchers said the prince had been debating for the past week or so whether to issue a statement about the book.

Jephson, who worked for Diana for more than seven years, said in Shadows of a Princess that the royals treated her with indifference instead of reaching out to her.

Earlier this month Queen Elizabeth and Prince Charles took the rare step of issuing a public statement deploring the planned publication of Jephson's book, which they said would be upsetting for Diana's sons and family.

Diana was killed in a car crash in Paris on August 31, 1997. Her failed marriage to heir-to-the-throne Charles ended in divorce in 1996. Jephson has defended the book as a "truthful and balanced account" of his time with the princess.

William, speaking at his father's house at Highgrove in western England, said he wanted "to do something constructive" during his 10 weeks in Chile.

Buckingham Palace said he would travel to some of the most remote parts of Patagonia, where he would work alongside 110 other young volunteers on environmental and community projects.

The prince said he had raised the equivalent of $8,000 through a sponsored water polo match to pay his own costs and to enable a disadvantaged young person from the northeastern city of Newcastle to join the expedition.

Casually dressed in a brown pullover, the prince often lowered his gaze from the cameras in a way that reminded onlookers of his late mother.

It had been his own choice to go to Patagonia with the Raleigh International exposition.

"I was just talking with friends and they said it was good idea and I just sort of liked the idea," he said.

While he is in Chile, the prince will keep in touch with his father via e-mail until he returns home before Christmas.

Following what Britons call the "gap year,"year between high school and college, William will head to St. Andrews University in Scotland to study history of art.

"My plans aren't quite solid," he said. "I'm hugely disorganized, you see, so once I sort it out you'll probably find out."

He praised the media for agreeing to leave him alone while he was a schoolboy at Eton College, which he left this year.

"It made a real big difference with everyone not trying to sort of snap a picture every time I was walking around the streets," he said. "I hope it just continues for Harry as well when he is there."