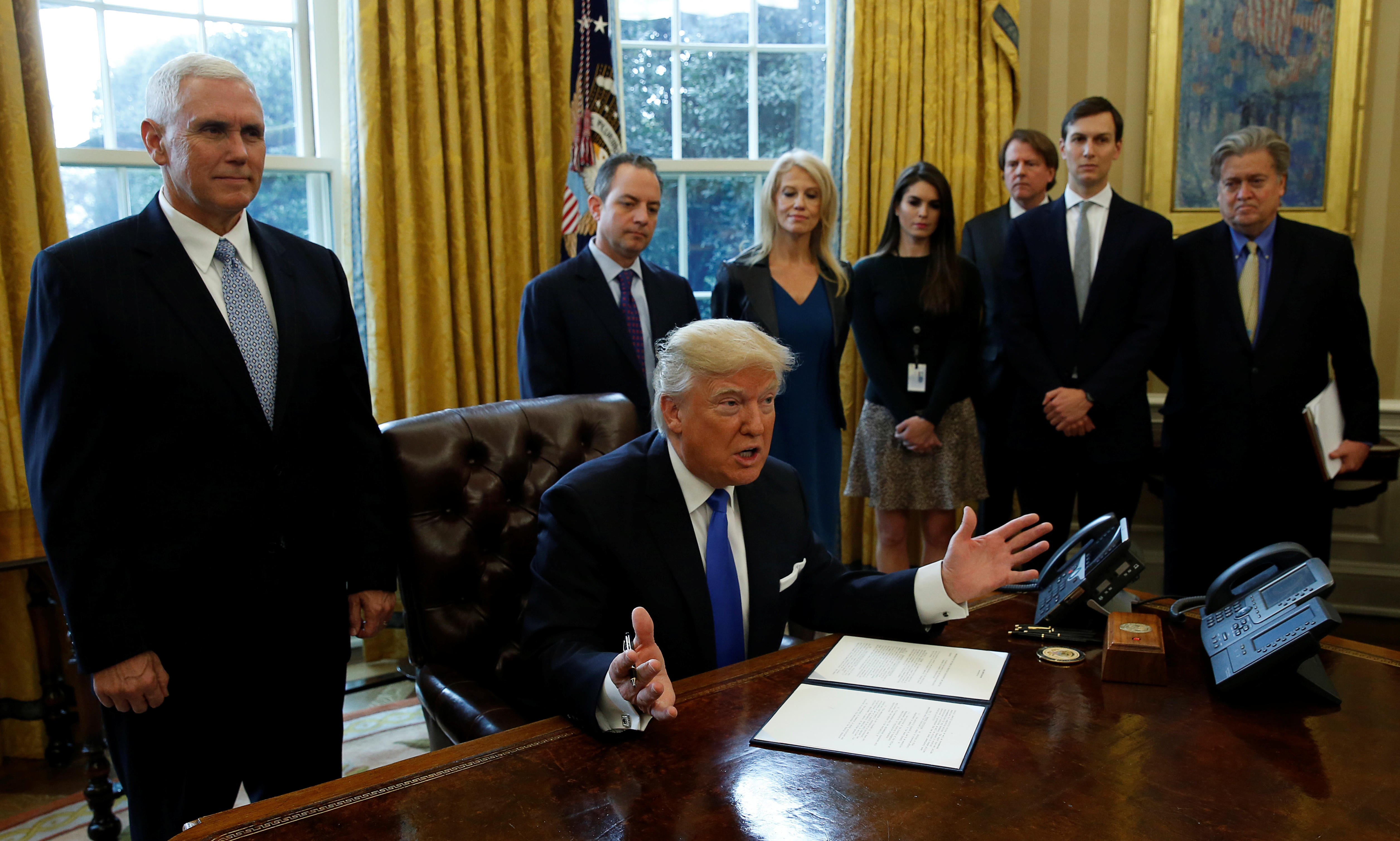 WASHINGTON -- The Trump administration has instituted what it described as a temporary media blackout at the Environmental Protection Agency and barred staff from awarding any new contracts or grants.

The Trump administration has also ordered what it called a temporary suspension of all new business activities at the department, including issuing task orders or work assignments to EPA contractors. The orders were expected to have a significant and immediate impact on EPA activities nationwide.

Similar orders barring external communications have been issued by the Trump administration at other federal agencies in recent days, including the Agriculture and Interior departments.

Staffers in EPA’s public affairs office are instructed to forward all inquiries from reporters to the Office of Administration and Resources Management.

“Incoming media requests will be carefully screened,” one directive said. “Only send out critical messages, as messages can be shared broadly and end up in the press.”

A memo that went out to some members of the EPA staff and was obtained by CBS News outlined a list of bulleted restrictions.

“No blog messages,” it added.

A review of EPA websites and social media accounts, which typically include numerous new posts each day, showed no new activity since Friday.

The Office of Public Affairs at the EPA headquarters issued a statement saying, “The EPA fully intends to continue to provide information to the public.”

“A fresh look at public affairs and communications processes is common practice for any new Administration, and a short pause in activities allows for this assessment,” the statement said.

White House spokesman Sean Spicer said Tuesday he had no information on the blackout. He said aides were looking into the circumstances.

“We’re just trying to get a handle on everything and make sure what goes out reflects the priorities of the new administration,” Ericksen said.

Beyond what was stated in the internal email, Ericksen clarified that the freeze on EPA contracts and grants won’t apply to pollution cleanup efforts or infrastructure construction activities.

Ericksen said there is a freeze on some grants and contracts, but not all. He described the freeze as an effort to “get a handle on all the money going out the door.”

He expects these holds to be lifted and said the timing would be decided by transition officials in consultation with the White House.

The executive director for the advocacy group Public Employees for Environmental Responsibility, Jeff Ruch, said the orders go beyond what has occurred in prior presidential transitions.

“We’re watching the dark cloud of Mordor extend over federal service,” Ruch said Tuesday, referring to the evil kingdom in the epic fantasy, The Lord of the Rings.

Ruch noted that key posts at EPA have not yet been filled with Republican appointees, including Trump’s nominee for EPA administrator, Scott Pruitt. That means there are not yet the new senior personnel in place to make key decisions.

Environmentalists said the orders were having a chilling effect on EPA staff, many of whom were suffering from low morale. Trump and Pruitt have both been frequent critics of the agency and have questioned the validity of climate science showing that the Earth is warming and man-made carbon emissions are to blame.

Liz Perera, climate policy director for the Sierra Club, said Trump’s move to freeze all EPA communications and contracts should be “a major red flag for all Americans.”

“EPA was created to ensure that all Americans can enjoy clean air to breathe, clean water to drink and have their health protected from environmental and climate threats,” Perera said.

At President Trump’s alma mater, the University of Pennsylvania, environmental professors like Bethany Wiggin listened carefully to candidate Trump talk about climate change, which is why she, her colleagues and her students are now racing to back up on other servers information available on government websites, CBS News’ Jim Axelrod reported.

Temporary restrictions announced on Tuesday -- that EPA employees can no longer post or blog from government accounts -- stoked their fears that the administration will limit access to data as it rolls back environmental protections.

“So, there’s kind of a vulnerability of internet materials already, she said.

“They become more vulnerable still when controlled by an administration who finds them inconvenient.”

Staff at the Agriculture Department have also received orders not to release any documents to the public.

“This includes, but is not limited to, news releases, photos, fact sheets, news feeds and social media content,” read the email memo, which was obtained by The Associated Press.

“As the U.S. Department of Agriculture’s chief scientific in-house research agency, ARS values and is committed to maintaining the free flow of information between our scientists and the American public as we strive to find solutions to agricultural problems affecting America,” Bentley said, according to a statement.

The agency said that “information on our projects, people and locations” would still be available on its website.

AP reported over the weekend that staff at the Interior Department were temporarily ordered to stop making posts to its Twitter account. The prohibition came after the official account of the National Park Service, a bureau of the department,retweeted a pair of posts to its 315,000 followers that seemed to be a swipe at Trump on his initial day in office. The first was a photo that compared the crowd gathered on the National Mall for Trump to the much-larger gathering that stood in the same spot eight years earlier for President Barack Obama’s swearing-in.

Trump later falsely claimed that more than 1 million people attended his inauguration, which Spicer insisted was the most-watched in history.