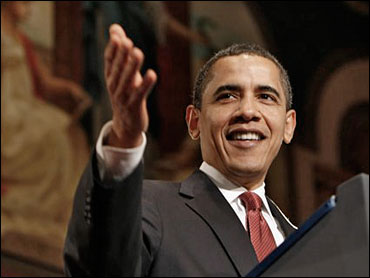 (AP Photo/Gerald Herbert)
President Obama can't turn water into wine, but he is determined to change sand into rock. In a major economic speech today at Georgetown University, Mr. Obama invoked the Sermon on the Mount -- likening the economic foundations of the previous administrations to sand that is easily blown away:

"There is a parable at the end of the Sermon on the Mount that tells the story of two men. The first built his house on a pile of sand, and it was destroyed as soon as the storm hit. But the second is known as the wise man, for when '…the rain descended, and the floods came, and the winds blew, and beat upon that house… it fell not: for it was founded upon a rock.'"

"We cannot rebuild this economy on the same pile of sand. We must build our house upon a rock. We must lay a new foundation for growth and prosperity – a foundation that will move us from an era of borrow and spend to one where we save and invest; where we consume less at home and send more exports abroad."

The question is whether Mr. Obama's economic recovery plan can turn sand into rock. He hasn't performed or promised any miracles. His administration has been persistent and dogged in its efforts to "clear away the wreckage" and create a new, 21st century financial system, "tough new rules for Wall Street," as the president said in his speech.

But, the grinding sound you hear in Washington is the various factions producing more sand than rock as the economy continues to sputter -- despite some modest improvements, such as a spike in mortgage refinancing. The president noted "glimmers of hope," but also said, "We are not out of the woods just yet."

"The severity of this recession will cause more job loss, more foreclosures, and more pain before it ends. The market will continue to rise and fall. Credit is still not flowing nearly as easily as it should," he acknowledged in his speech.

"If we don't lay this foundation now, we'll be right back where we are today," he warned, and then pointed an accusing finger at the Washington culture and the media, citing the short attention span, grown shorter with the 24-hour news cycle, and need for instant gratification of "this town," and its "tendency to score political points instead of rolling up sleeves to solve real problems."

"When a crisis hits, there's all too often a lurch from shock to trance, with everyone responding to the tempest of the moment until the furor has died away and the media coverage has moved on, instead of confronting the major challenges that will shape our future in a sustained and focused way," he said.

The speech gave Mr. Obama an opportunity to once again state his case, articulate his vision and ask the American people for more patience and delayed gratification. As a chief executive only three months into a four-year term, he'll have several more quarters to show whether he can turn sand into rock. But the incessant grinding, partisanship and short attention span will continue as a counterpoint to Mr. Obama's relentless pursuit of the redeeming rock.

Daniel Farber is editor-in-chief of CBSNews.com.