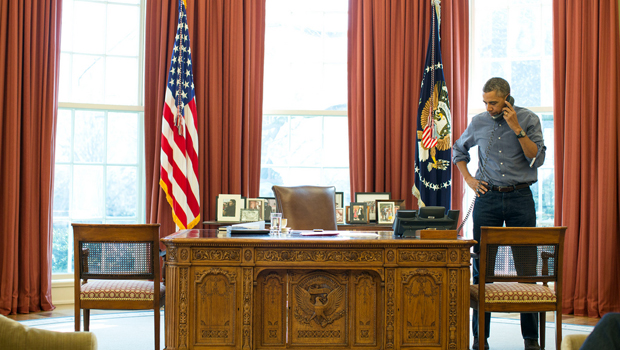 WASHINGTON -- President Obama on Saturday called on Russian President Vladimir Putin to de-escalate the tense atmosphere in Ukraine by pulling his forces back to bases in the country's Crimean region and to refrain from interfering elsewhere in the former Soviet republic.

Mr. Obama delivered the message to Putin during a 90-minute telephone conversation, the White House said.

But Mr. Obama's request appeared likely to go unheeded as the Kremlin said Putin, in turn, emphasized to Mr. Obama the existence of real threats to the life and health of Russian citizens living in Ukraine and that Russia has the right to protect its interests there.

Russian troops took over Crimea as the Russian parliament on Saturday granted Putin authority to use the military to protect Russian interests in Ukraine.

Ukraine's newly installed government was powerless to react to the swarm of Russian troops.

CBS News national security correspondent David Martin reported earlier Saturday that Russia flew hundreds of troops into Crimea Friday and that between 2,000 and 6,000 Russian troops were already based in Crimea, according to U.S. officials. Those troops were deployed from their bases to secure other facilities in Crimea.

Martin also reports that Ukraine's armed forces have told the American ambassador to Kiev that they do not intend to resist the Russian troop movements. However, Ukraine's leaders put its armed forces on full combat alert and warned Russia that any military intervention in the country would lead to war.

"President Obama expressed his deep concern over Russia's clear violation of Ukrainian sovereignty and territorial integrity," the White House said in a statement that called the action "a breach of international law."

Hours earlier, Mr. Obama's national security team huddled at the White House to get updates on the situation and discuss policy options. Mr. Obama did not participate. Vice President Joe Biden and Secretary of State John Kerry participated by videoconference.

Defense Secretary Chuck Hagel spoke by telephone with his Russian counterpart and stressed that, "without a change on the ground," Russia risks further instability in the region, isolation in the international community and an escalation that would threaten European and international security, the Pentagon said.

"I think it would be a mistake," Hagel said of Russia going into Ukraine. "This would set in motion so many different dynamics that are not in anyone's interest."

A defiant-sounding statement from Moscow said Putin stressed to Mr. Obama that the situation in Ukraine poses "real threats" to the life and health of Russian citizens and compatriots who live in Ukrainian territory.

"Vladimir Putin emphasized that, in the case of a further spread in violence in eastern regions (of Ukraine) and Crimea, Russia maintains the right to protect its interests and the Russian-speaking population that lives there," the Kremlin said.

Mr. Obama told Putin that the appropriate way to address concerns about the treatment of ethnic Russian and minority populations in Ukraine is to do so peacefully through direct contact with Ukraine's new government and through international observers.

He said the U.S. was prepared to help mediate such a dialogue.

Mr. Obama also made clear that Russia's continued violation of Ukraine's sovereignty and territorial integrity would have a negative effect on Russia's standing in the eyes of the world.

Mr. Obama said Friday in a televised statement from the White House that "there will be costs" to Russia for military intervention in Ukraine. But Mr. Obama and the European allies he has pledged to consult with regularly on this issue have limited options.

Putin has so far dismissed the few specific threats from the United States. The U.S. and Europe are not obligated to come to Ukraine's defense because it does not have full-member status in NATO, while broader international action through the United Nations seems all but impossible because of Russia's veto power as a member of the Security Council.

Administration officials had said on Friday that Mr. Obama might retaliate by canceling a trip to Russia in June to attend the Group of Eight international economic summit and could also cut off trade talks with Moscow.

The White House said Saturday that the U.S. will suspend upcoming participation in "preparatory meetings" for the summit, which is being planned for the Black Sea resort of Sochi, site of the just-completed Winter Olympics.

Political turmoil in Ukraine pushed President Viktor Yanukovych from office following massive pro-democracy protests after he rejected a partnership agreement with the European Union in favor of deepening his country's historical ties with Moscow.

Yanukovych held a news conference in southern Russia on Friday in which he said he was not asking Moscow for military assistance and called military action "unacceptable." Yanukovych, who still considers himself Ukraine's president, also vowed to "keep fighting for the future of Ukraine" and blamed the U.S. and the West for encouraging the rebellion that forced him to flee last weekend.

The EU agreement Yanukovych rejected would have paved the way for Ukraine's greater integration with the West, including potential affiliation with NATO. Russia strongly objects to NATO membership for former Warsaw Pact members and Soviet republics.