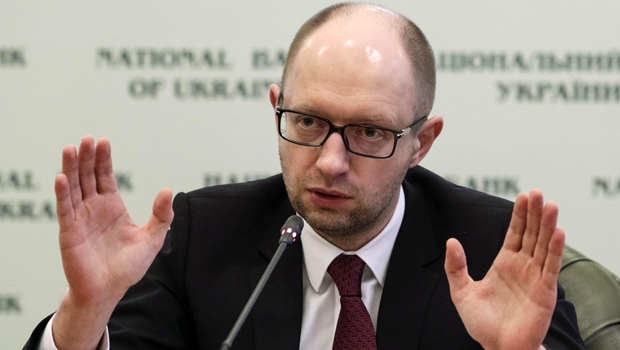 KIEV, Ukraine -- Ukraine put its armed forces on full combat alert on Saturday and warned Russia that any military intervention in the country would lead to war.

After a more than three-hour meeting with security and defense chiefs, Acting President Oleksandr Turchynov said there was no justification for what he called Russian aggression against his country.

Russian troops took over Crimea as the parliament in Moscow gave President Vladimir Putin a green light Saturday to use the military to protect Russian interests in Ukraine.

Standing beside Turchynov, Prime Minister Arseny Yatsenyuk said he had urged Russia to return its troops to base in Crimea during a phone call with Prime Minister Dmitry Medvedev and called for talks.

"Military intervention would be the beginning of war and the end of any relations between Ukraine and Russia," Yatsenyuk told reporters.

CBS News national security correspondent David Martin reported earlier Saturday that Russia flew hundreds of troops into Crimea Friday and that between 2,000 and 6,000 Russian troops were already based in Crimea, according to U.S. officials. Those troops were deployed from their bases to secure other facilities in Crimea.

Martin also reports that Ukraine's armed forces have told the American ambassador to Kiev that they do not intend to resist the Russian troop movements.

President Obama and Putin spoke Saturday afternoon about the crisis. During the 90-minute phone call, Mr. Obama "expressed his deep concern over Russia's clear violation of Ukrainian sovereignty and territorial integrity," according to a description of the call provided by the White House.

Mr. Obama called on Russia to withdraw its forces back to its bases in Crimea and "to refrain from any interference elsewhere in Ukraine," according to the description.

In a statement posted online, the Kremlin said Putin told Mr. Obama that Moscow reserves the right to protect its interests and those of Russian speakers in Ukraine.

"In response to the concern shown by Obama about the plans for the possible use of Russia's armed forces on the territory of Ukraine, Putin drew attention to the provocative, criminal actions by ultra-nationalists, in essence encouraged by the current authorities in Kiev," the statement said.

Also Saturday, Ukraine asked the United States and other key members of the U.N. Security Council to help safeguard its territorial integrity.

"We can stop the expansion of this aggression," Ukraine's U.N. Ambassador Yuriy Sergeyev told reporters after addressing a closed-door U.N. Security Council meeting on the crisis in his country.

He said that Russia's military aggression had violated a 1994 agreement on safeguarding Ukraine's territorial integrity and called on the other four permanent U.N. Security Council members to use their diplomatic powers to help his country.

"Now what we are doing is we are addressing for other guarantors (of Ukraine's sovereignty) - the United States, the United Kingdom, France, and China - to perform their guarantees," Sergeyev said.

"Still there is a possibility for world leaders to speak with President Putin and prevent ... the further deterioration of the situation," he said.

"The secretary-general reiterates his call for the full respect for and preservation of the independence, sovereignty and territorial integrity of Ukraine," Nesirky told reporters.

"He calls for an immediate restoration of calm and direct dialogue between all concerned to solve the current crisis," he added.

The 15-nation council's emergency meeting on Ukraine - the second in as many days - was convened at the request of Britain. British Ambassador Mark Lyall Grant told reporters on the way into the meeting that he called for the meeting to learn "what justification Russia claims to have" for its actions in Ukraine.

The council met on Friday to discuss the crisis in Ukraine's Crimea region but took no formal action, as expected. The meeting highlighted the deep divisions between the United States and other Western nations and Russia, which has a major Black Sea naval base in the Crimea.

Russian Ambassador Vitaly Churkin, however, said any military movements by Russian forces there were in compliance with its agreement with Kiev on maintaining its naval base there.

Russia is a veto-wielding permanent member of the Security Council and, therefore, able to block any actions proposed by its members.