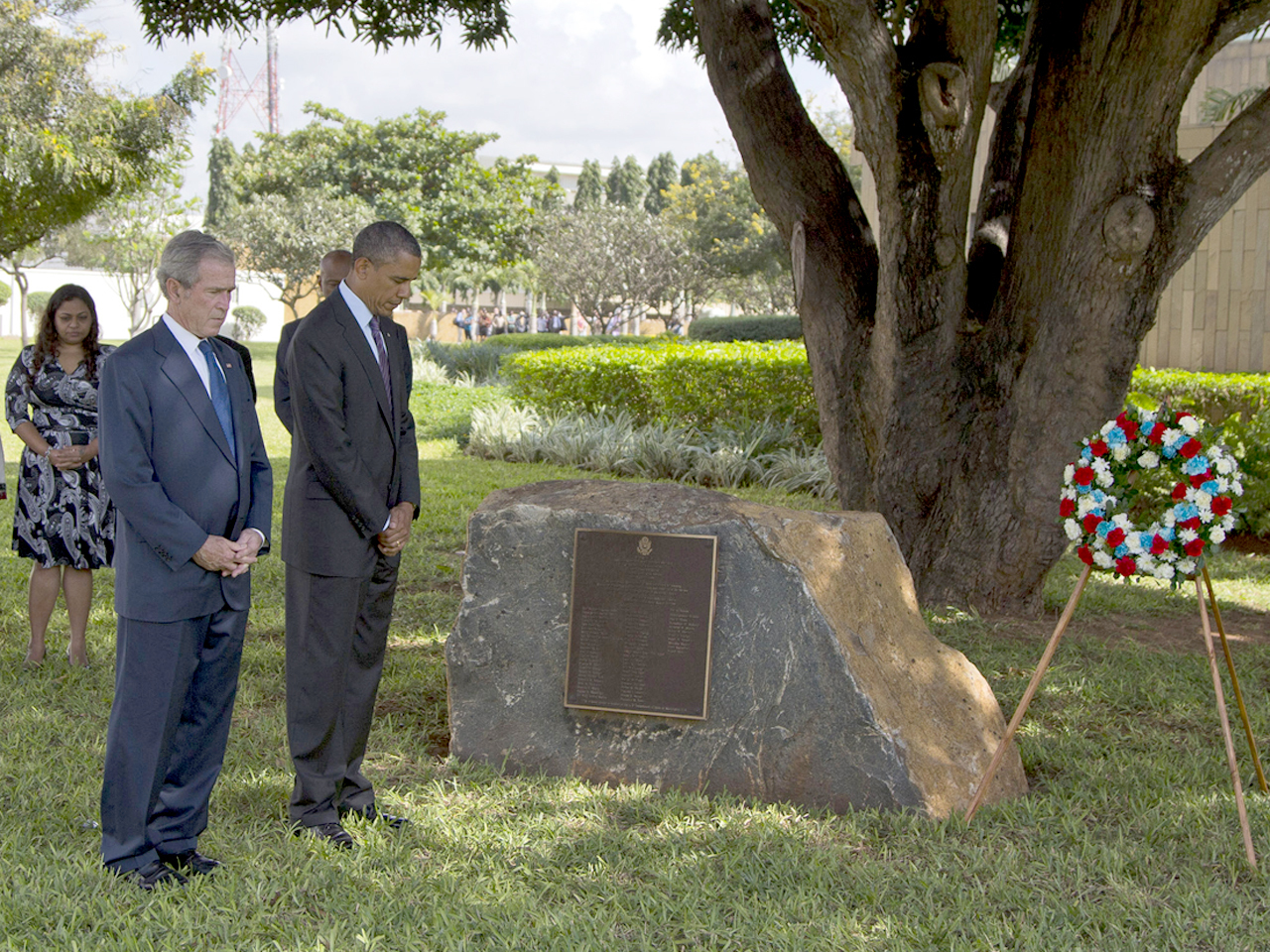 The U.S. presidents had a brief, silent appearance together at a monument to victims of the 1998 embassy bombing here in the east African city where Bush coincidentally happened to be as Obama wrapped up a weeklong tour of the continent. While the two U.S. leaders didn't say anything publicly, their wives engaged in a warm and chatty joint appearance at a summit on African women.

Initially the two presidents weren't even planning to meet while in town, but first lady Michelle Obama joked as she sat next to her predecessor: "They're learning from us."

The Obamas departed Africa for home shortly after crossing paths with the Bushes, who were hosting the summit promoting the role of African first ladies in bringing change to their countries. Bush ended up joining the current president for the wreath-laying ceremony honoring the Tanzanian victims of the simultaneous attacks at the U.S. embassies here and in Kenya masterminded by Osama bin Laden.

The two presidents bowed their heads as a Marine placed the wreath of red, white and blue flowers in front of the large stone memorial on the grounds of the new U.S. Embassy. After a few moments, they shook hands with survivors of the attack and relatives of those killed before walking back into the embassy together in private discussion.

At that very moment, their wives were putting on a public display of mutual affection in a discussion moderated by American journalist Cokie Roberts. Mrs. Obama said she wanted to appear with Laura Bush because "I like this woman."

"It's sort of a club, a sorority, I guess," Mrs. Bush responded.

Their goal was to encourage African first ladies to raise their voices for causes they are passionate about, even if the public is sometimes focused on more trivial matters, the said.

"While people are sorting through our shoes and our hair ..." Mrs. Obama started.

"Whether we have bangs," Mrs. Bush interjected to laughter. Mrs. Obama expressed surprise that her change in hair style this year would prompt so much media coverage. "Who would have thought?"

But Mrs. Obama said: "Eventually people stop looking at our bangs and they start looking at what we are standing in front of."

While in Africa, Obama repeatedly has praised Bush for helping save millions of lives by funding AIDS treatment. "I'm looking forward to being able, on African soil, to once again thank him on behalf of the American people for showing how American generosity and foresight could end up making a real difference in people's lives," Obama said Monday.

But Obama also said he wants to change the approach the U.S. takes with Africa. "We are looking at a new model that's based not just on aid and assistance, but on trade and partnership," he said.

"Ultimately, the goal here is for Africa to build Africa for Africans," Obama said. "And our job is to be a partner in that process."

In that spirit, Obama announced a new trade agreement with eastern African nations and a program to bring more power to Africans without access to electricity.

One invention that could help on the electricity front is the SOCCKET ball, developed by two Harvard graduates. The ball has a pendulum-like mechanism inside that creates kinetic energy during play and stores it. Its maker says 30 minutes of play can power a simple LED lamp for three hours. The plan is to distribute it to kids in Africa.

During a visit to a local power plant with Tanzanian President Jakaya Kikwete, Obama kicked a ball off his foot and did a low header.

"We're going to start getting these all around Africa," Obama said at the Ubungo Power Plant, which was funded by a U.S grant and built by American corporations General Electric and Symbion. "Pretty impressive stuff."

In remarks afterward, he touted the "Power Africa" electricity program as a win-win for Africans and U.S. companies.

He also reflected on the weeklong trip, recalling some of the folks he met along the way, including a female farmer in Senegal and young people in Soweto.

"I'm inspired because I'm absolutely convinced that with the right approach, Africa and its people can unleash a new era of prosperity," Obama said.