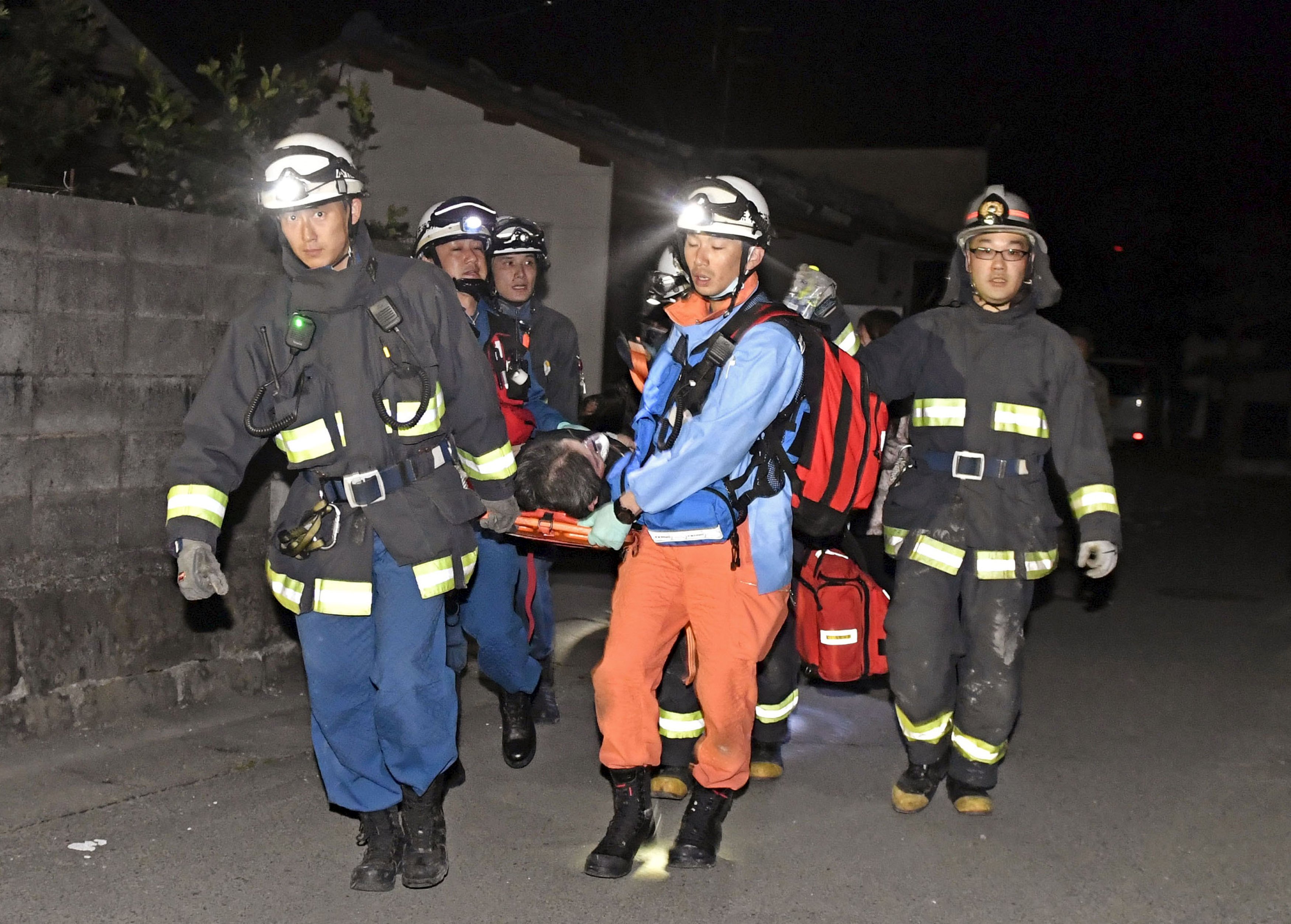 TOKYO-- At least nine people were killed and 761 injured by a magnitude-6.5 earthquake Thursday night that knocked down houses and buckled roads in southern Japan, the government's chief spokesman said.

Yoshihide Suga said he would visit the area Friday to assess the damage. He said some 1,600 soldiers had been deployed, and TV reports showed some delivering blankets and adult diapers to the thousands of people who took shelter because their homes were wrecked or unsafe.

Both victims are from the hardest-hit town of Mashiki, about 9 miles east of Kumamoto city on the island of Kyushu, said Kumamoto prefecture disaster management official Takayuki Matsushita.

The quake struck at 9:26 p.m. at a depth of 7 miles near Kumamoto city on the island of Kyushu, the Japan Meteorological Agency said. There was no tsunami risk.

Suga said at least 19 houses collapsed, and hundreds of calls came in reporting building damage and people buried under debris or trapped inside.

"Because of the night darkness, the extent of damage is still unclear," he said.

The damage and calls for help are concentrated in the town of Mashiki, about 800 miles southwest of Tokyo, Japan's Fire and Disaster Management Agency said

One of the victims in Mashiki died after being pulled from some rubble, and the other was killed in a fire, Matsushita said. A third person rescued from under a collapsed building is in a state of heart and lung failure.

"There was a ka-boom and the whole house shook violently sideways," Takahiko Morita, a Mashiki resident said in a telephone interview with Japanese broadcaster NHK. "Furniture and bookshelves fell down, and books were all over the floor."

Morita said some houses and walls collapsed in his neighborhood, and water supply had been cut off.

Dozens of people evacuated their homes and gathered outside Mashiki town hall, sitting on tarps well after midnight. Some wrapped blankets around their shoulders against the springtime chill.

Prime Minister Shinzo Abe told reporters that the government has mobilized police, firefighters and self-defense troops for the rescue operation.

"We'll carry out relief operation through the night," he said.

Suga said there no abnormalities at nearby nuclear facilities. The epicenter was 74 miles northeast of Kyushu Electric Power Co.'s Sendai nuclear plant, the only one operating in the country.

Following the quake, some high-speed trains were halted as a precaution, Reuters reported.

Most of Japan's nuclear reactors remain offline following the meltdowns at the Tokyo Electric Power Co.'s Fukushima plant in 2011 after a magnitude 9.0 earthquake triggered a huge tsunami.

Television footage showed fires breaking out in some places, with firefighters battling an orange blaze.

Keisukei Urata, an official in nearby Uki city who was driving home when the quake struck, told NHK that parts of the ceiling at Uki City Hall collapsed, windows broke and cabinets fell to the ground.

Kasumi Nakamura, an official in the village of Nishihara, said that the rattling started modestly and grew violent, lasting about 30 seconds.

"Papers, files, flower vases and everything fell on the floor," he told NHK.

There were multiple aftershocks, the largest one with a preliminary magnitude of 6.4 shortly after midnight, according to the Japan Meteorological Agency.

The U.S. Geological Survey measured the initial quake's preliminary magnitude at 6.2. It upgraded its damage assessment to red, meaning extensive damage is probable and the disaster likely widespread.

Footage from an NHK bureau in the area showed books, files and papers raining down to the floor. One employee appeared to have fallen off a chair, while others slid under their desks to protect their heads.