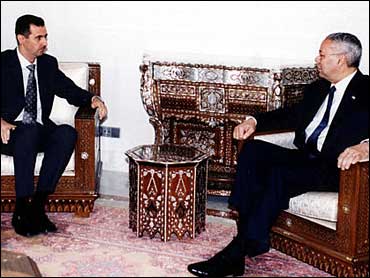 U.S. Secretary of State Colin Powell reported a receptive atmosphere but no breakthroughs Saturday in talks with Syria's leader on the Arab-Israeli conflict and fallout from the war in Iraq.

At a news conference in Beirut, where he flew after meeting Syrian President Bashar Assad in the Syrian capital, Damascus, Powell said the United States would press Israel to do everything possible to bring peace to the region.

At the news conference, Powell said he and Assad had discussed "all of the outstanding issues." The only commitment he got was that Syria would continue closing down Damascus offices of groups the United States considers terrorist organizations.

Powell said Assad promised to consider questions such as weapons of mass destruction, turning wanted Iraqis over to the United States, Syria's support for the militant Islamic organizations and sealing of its border with Iraq. Assad said he would deal with them through diplomatic channels, the secretary said.

Powell earlier had rejected an Arab idea, which Syria presented Friday in a proposed U.N. resolution, that weapons of mass destruction be declared illegal throughout the Middle East. Israel is the only country in the region assumed to have nuclear weapons, and the Arab resolution was aimed at those weapons. The Jewish state has not confirmed that they exist.

Before his meeting with Assad, Powell said clearing such weapons from the region is a long-standing U.S. goal, but now is not the time to address that matter.

"I think it is a goal that we have to pursue over time, and not ... at the moment of any particular declaration that might be put forward for political purposes, or to highlight the issue," Powell said.

Powell's first meeting with Assad in a year was largely to sell the Bush's administration "road map," or blueprint, for bringing peace to Palestinian and Israelis. The visit was made more urgent by developments during the three-week U.S.-led invasion of Iraq, which ended the reign of President Saddam Hussein.

The Americans were angered when armed people from Syria crossed into Iraq and fought for Saddam. Then, as the outcome became clearer, the United States contended many Iraqi officials and other fighters fled back across the frontier into Syria.

A senior State Department official, speaking on the condition of anonymity, later said Assad spoke at length to Powell about Syria's views and displayed a "general willingness to cooperate on some issues."

On the overall Middle East situation, Powell was noncommittal about whether the administration would try to bring the opposing sides together for a peace conference.

"We will have a conference in due course when circumstances permit," he said in response to a question. Lebanese Foreign Minister Jean Obeid, meeting reporters with Powell, stressed that security for Israel can be attained only through a comprehensive peace settlement in the Middle East.

Before the Damascus meeting, Powell said he would emphasize to Assad that although the "road map" first addresses the situation between Israelis and Palestinians, it is envisioned as the path to a settlement that also includes the interests of Syria and Lebanon. Both are neighbors of Israel, and Syria has had thousands of soldiers in Lebanon since its bloody civil war during the 1980s.

"In every one of my previous meetings with the president of Syria, we've discussed the need for parallel tracks that may not move at the same time, the same rate, as the Palestinian-Israeli track, but it must be there," Powell said.

"We are interested in a comprehensive solution that will involve creation of a Palestinian state and settling the outstanding issues between Israel and Lebanon, and Israel and Syria."

Saturday's talks were a prelude to a second Mideast trip by Powell next week to meet with Israeli Prime Minister Ariel Sharon and Mahmoud Abbas, the new Palestinian prime minister.