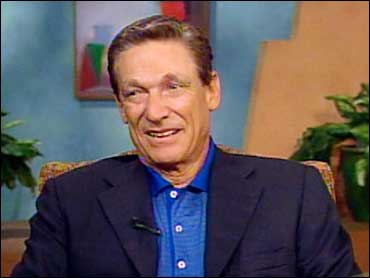 Bianca Nardi, 28, of Fort Lee, N.J., says in court papers that the sexually charged atmosphere among the show's production staff was fostered by the "intimate and sexual relationship between defendants Maurice Richard Povich and Donna Benner Ingber."

Court papers also say Nardi had an unfairly heavy workload because she did tasks that were supposed to be done by Ingber, who often refused to do her own work — without penalty — because of her relationship with Povich.

Gary Rosen, a spokesman for the show, flatly denied the allegations, as did a spokeswoman for NBC Universal.

"We do not believe that Ms. Nardi was a victim of unlawful sexual harassment and intend to defend this lawsuit vigorously," NBC spokeswoman Rebecca Marks said.

Ingber, who is also named as a defendant, "many times in an intoxicated condition, telephoned (Nardi's) residence at all hours of the late evening to discuss her personal relations with defendant Povich (and other men whom she was secretly seeing)" and to ask Nardi what staffers were saying about the relationship, court papers say.

Nardi says she went to work for show in June 2000 and was promoted twice. She worked there until this month, when she took a temporary medical leave, said her lawyer Bruce Baron.

Through the nearly six years of her employment, Nardi's court papers say, Paul Faulhaber, executive producer of "The Maury Povich Show," ordered her to wear short skirts, low-cut blouses and push-up bras. Faulhaber is also a named defendant in the suit.

Court papers say Faulhaber directed her to wear concealed cameras and microphones for undercover assignments "such as going to bars to secretly videotape married men agreeing to have sex with her."

Nardi complains in court papers that these activities were outside her job description but she was forced to comply for fear of being fired. Her lawsuit says that when she complained, Faulhaber retaliated by making her do other demeaning jobs.

Baron said Monday that Nardi has been in psychiatric treatment because of the harassment. He also said she gained 40 to 50 pounds because of the workplace stress.

The lawsuit asks at least $100 million in compensatory and punitive damages.