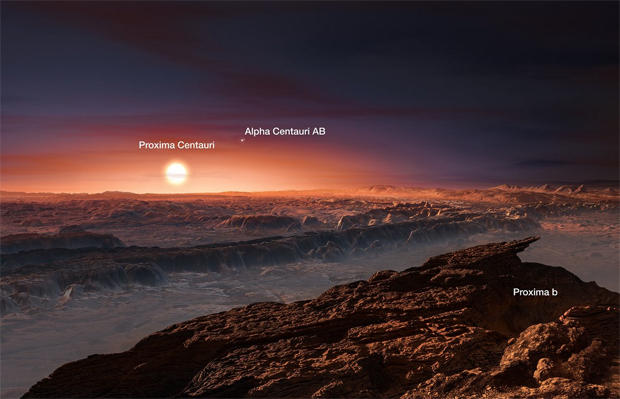 After years of observations and painstaking analysis, an international team of astronomers using independent Earth-based instruments has discovered what they believe is a potentially habitable, roughly Earth-size world orbiting the nearest star to the sun, according to a paper in the journal Nature released Wednesday.

The team, led by Guillem Anglada-Escudé of Queen Mary University of London, found the planet orbiting Proxima Centauri, a cool, reddish M-class dwarf star 4.25 light years from the sun. Dubbed Proxima b, the planet is roughly 1.3 times the size of Earth, circles its star at a distance of 4.3 million miles and completes one orbit, or local year, every 11.2 Earth days.

While Proxima b is much closer to Proxima Centauri than Mercury is to Earth’s sun, the planet is within the much cooler star’s habitable zone, meaning water could exist on the world’s sunlit side, raising at least the possibility of life.

The planet was discovered spectroscopically by analyzing very slight changes – doppler shifts – in the light from Proxima Centauri as the star was tugged back and forth by the gravity of its unseen orbiting companion. The wobble amounted to a periodic motion of about 3 miles per hour toward and away from Earth. The only known process that could produce such a periodic motion is the gravitational interplay between the star and a planet.

NASA’s Kepler space telescope has discovered more than 2,300 exoplanets to date by studying how a star’s light dims when a planet passes in front of it as viewed by the spacecraft. The Kepler data has led to a statistical conclusion that perhaps 30 percent of the stars in the Milky Way galaxy host potentially habitable worlds.

The discovery of a nearly Earth-size planet orbiting the sun’s nearest neighbor is a major step toward confirmation that such worlds are, in fact, common.

“So two totally independent techniques are converging on a number,” Paul Butler, a Carnegie Institution astronomer and one of the co-authors of the Nature paper, told CBS News in a telephone interview from the institute’s Las Campanas Observatory in Chile. “And you know, there’s a lot of uncertainty in that number. It could be 20 percent, it could be 50 percent. But it doesn’t really matter. That’s a lot of stars.”

As a result, he said, astronomers are “beginning to become more and more comfortable with the notion that habitable planets are very common. But up until now, it’s been sort of an abstraction, right? It’s been sort of a statistical analysis.

“What this discovery is is a giant, flashing neon sign that says here, around the very nearest star, there’s a potentially habitable planet,” he said. “It’s no longer a vague abstraction, it’s concrete.”

“When astronomers talk about a potential habitable planet, all they mean is that it’s the right distance from the star to possibly have liquid water on the surface,” Butler said. “Until we know something about the atmosphere, any talk about life is just pure speculation.”

Even speculation must be tempered by the presumed environment close to an M-class dwarf. While water may be possible on the surface of Proxima b, the planet may be tidally locked in place with one side in perpetual daylight and the other in darkness.

Stars like Proxima Centauri also generate strong magnetic fields, ultraviolet and X-ray flares that could help strip away an atmosphere and bathe a planet in relatively high levels of radiation. But Butler said that alone would not be a deal breaker.

“We know of single-cell creatures that live in uranium mines,” he said. “They don’t care! For advanced life, things like lions and tigers and bears, yeah, radiation’s probably not great. But for single-cell creatures it’s not an issue. But again, any discussion of life is just speculation at this point.”

Those flares and changes in Proxima Centauri’s variable light output, along with only periodic observation, complicated attempts to detect the gravitational wobble that might indicate a planet.

“The first hints of a possible planet were spotted back in 2013, but the detection was not convincing,” Anglada-Escudé said in a statement from the European Southern Observatory. “Since then we have worked hard to get further observations off the ground with help from ESO and others.”

The well-publicized project’s name played off astronomer Carl Sagan’s famous description of Earth as a “pale blue dot” in space.

“I kept checking the consistency of the signal every single day during the 60 nights of the Pale Red Dot campaign,” Anglada-Escudé said in the ESO release. “The first 10 were promising, the first 20 were consistent with expectations and at 30 days, the result was pretty much definitive, so we started drafting the paper.”

Based on those observations, Anglada-Escudé and his team were able to re-analyze earlier data from HARPS, correcting uncertainties that were the result of Proxima Centauri’s variability. Butler contributed computer code that provided a similar correction to data collected by another instrument used at La Silla, the Ultraviolet and Visual Eschelle Spectrograph, or UVES, between 2000 and 2008.

Astronomers plan to carry out additional observations using current and next generation instruments, including the gargantuan European Extremely Large Telescope with a segmented mirror 39 meters – 128 feet – across. First light is expected in 2024.

“Many exoplanets have been found and many more will be found, but searching for the closest potential Earth-analogue and succeeding has been the experience of a lifetime for all of us,” Anglada-Escudé said in the ESO release. “The search for life on Proxima b comes next.”

History Of The Hyperlink?

Is your phone eavesdropping on you?
View CBS News In
CBS News App Open
Chrome Safari Continue
Be the first to know
Get browser notifications for breaking news, live events, and exclusive reporting.