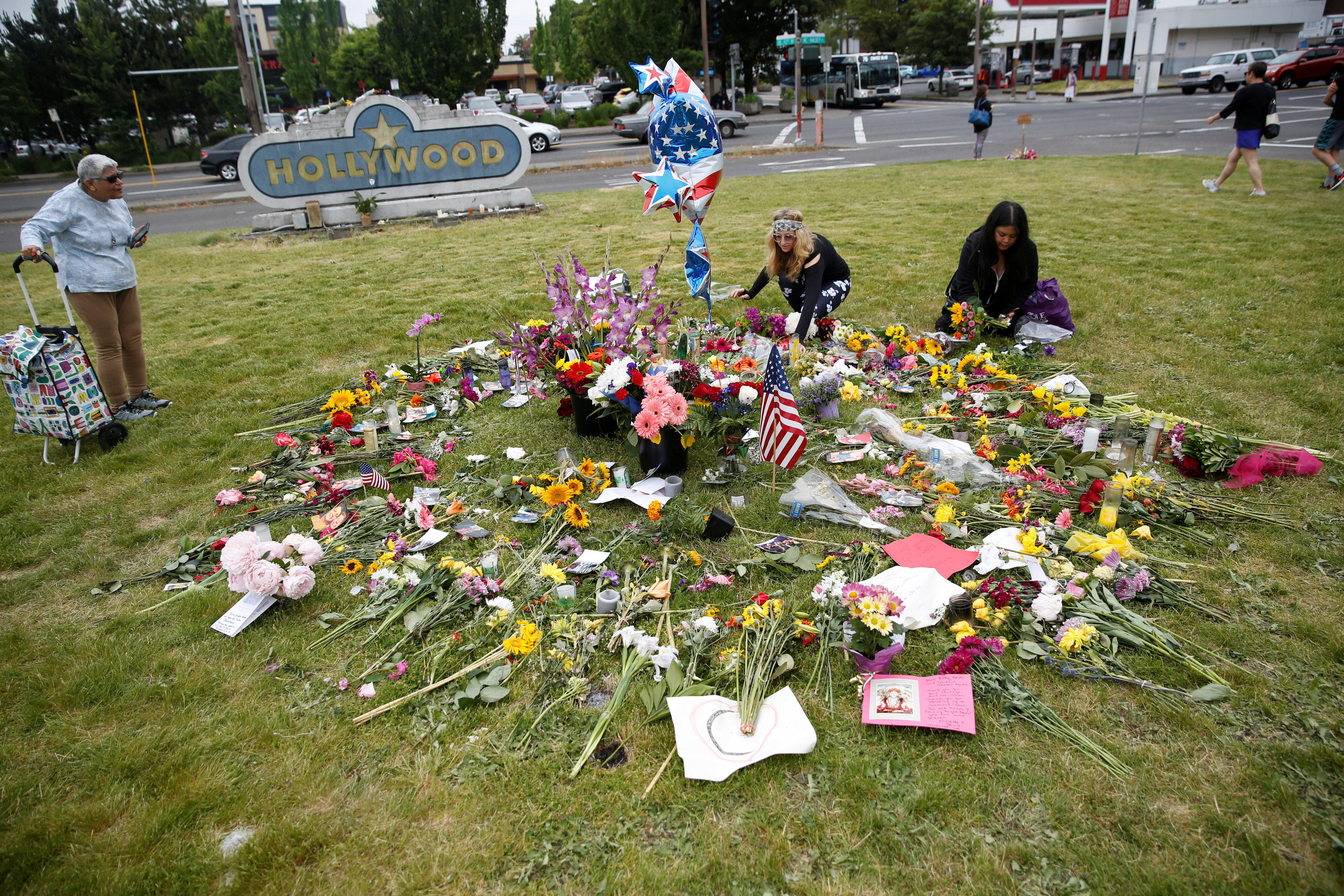 PORTLAND, Ore. -- The man police say fatally stabbed two other men who tried to shield young women from an anti-Muslim tirade on a Portland, Oregon, light-rail train is scheduled to make his initial court appearance Monday, and the city's mayor says he hopes the slayings will inspire "changes in the political dialogue in this country."

The attack happened Friday, the first day of Ramadan, the holiest time of the year for Muslims. Authorities say Christian started verbally abusing two young women, including one wearing a hijab. Three other men on the train intervened before police say Christian attacked them, killing two and wounding one.

President Donald Trump condemned the stabbings, writing Monday on Twitter: "The violent attacks in Portland on Friday are unacceptable. The victims were standing up to hate and intolerance. Our prayers are w/ them."

Mayor Ted Wheeler said he appreciated Mr. Trump's words but stressed the need for action. Wheeler urged organizers to cancel a "Trump Free Speech Rally" in Portland and other similar events next weekend, saying they are inappropriate and could be dangerous.

"I hope we rise to the memory of these two gentlemen who lost their lives," the mayor told reporters. "Let's do them honor by standing with them and carrying on their legacy of standing up to hate and bigotry and violence."

Taliesin Myrddin Namkai Meche, 23, and Ricky John Best, 53, were killed as they tried to stop the harassment.

Christian's social media postings indicate an affinity for Nazis and political violence. He is accused of aggravated murder, intimidation - the state equivalent of a hate crime - and being a felon in possession of a weapon.

Christian served prison time after holding up employees at a convenience store with a gun in 2002, court records show. Telephone messages left at the home of Christian's mother Sunday and Monday were not returned. It was not clear if he had a lawyer yet.

Police Sgt. Pete Simpson told CBS News Christian attended a free speech march in April with a baseball bat to confront protesters but the bat was quickly confiscated by officers.

Christian went into a racist tirade on a train the night before the deadly attack, police confirmed to CBS affiliate KOIN. It was caught on video.

The Portland Mercury, one of the city's alternative weeklies, posted an article with video clips of a man wearing a metal chain around his neck and draped in an American flag. "He ranted how he was a nihilist. He'd soon yelled racial slurs ... and gave the Nazi salute throughout the day," the Portland Mercury says.

On what appears to be Christian's Facebook page he showed sympathy for Nazis and Timothy McVeigh, who bombed a federal building in Oklahoma City in 1995.Portland spent the holiday weekend memorializing the victims.

The mother of one of the targets of the rant said she was overwhelmed with gratitude and sadness for the strangers who died defending her daughter, 16-year-old Destinee Mangum.

Mangum told news station KPTV that she and her 17-year-old friend were riding the train when Christian started yelling at them. She said her friend is Muslim, but she's not.

"He told us to go back to Saudi Arabia, and he told us we shouldn't be here, to get out of his country," Mangum said. "He was just telling us that we basically weren't anything and that we should kill ourselves."

The teens moved toward the back of the train, preparing to get off at the next stop.

"And then we turned around while they were fighting, and he just started stabbing people, and it was just blood everywhere, and we just started running for our lives," Mangum said.

Micah David-Cole Fletcher, 21, was stabbed in the neck. His girlfriend, Miranda Helm, told The Oregonian/OregonLive that he was recovering his strength in the hospital.

A Facebook page for the Trump Free Speech Rally says there would be speakers and live music in "one of the most liberal areas on the West Coast." It says it will feature Kyle Chapman, who describes himself as an American nationalist and ardent supporter of Mr. Trump.

Chapman was arrested at a March 4 protest in Berkeley, the birthplace of the U.S. free speech movement in the 1960s that has become a flashpoint for the extreme left and right since Trump's election.

The University of California, Berkeley, has been criticized for canceling an appearance by conservative commentator Ann Coulter in April and another by right-wing provocateur Milo Yiannopoulos in February. It canceled Coulter's speech amid threats of violence, fearing a repeat of rioting ahead of the Yiannopoulos event.

Wheeler's call for the rally to be canceled comes amid a wider debate in the U.S. about the First Amendment, often in liberal cities like Portland and Berkeley, California, and on college campuses, where violent protests between far-right and far-left protesters have derailed appearances by contentious figures.