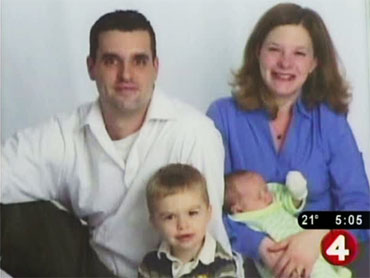 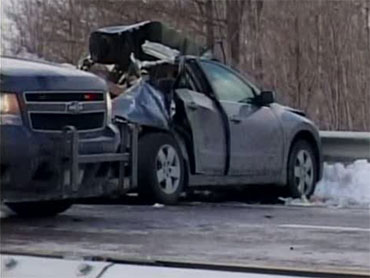 Photo: Julie Stratton and her family.

Stratton died as a result of the injuries she sustained in the Dec. 12, 2009 crash. Thomas Wallace, the 45-year-old truck driver, was arrested Tuesday and faces charges of second degree manslaughter.

The accident happened on a busy section of Interstate 90 outside of Pembroke, N.Y. Police say Stratton had hit a deer and had just called 911 to report the accident, according to CBS affiliate WIBV,when Wallace's tractor trailer smashed into her sedan from behind.

Photo: Julie Stratton's car was all but obliterated by the big rig that killed her.

"Amenities for truckers have come a long way with all the new technology," Ed Affi-Nito, a trucker with 32 years experience told the station, "but there [sic] a proper time to use it, and they're [sic] times when it's just not safe."

Unfortunately for Julie Statton's husband and two young children, she was sharing the road with one trucker who didn't make that distinction.

Woman recants her claims about 1999 slayings of Alabama teens
Thanks for reading CBS NEWS.
Create your free account or log in
for more features.
View CBS News In
CBS News App Open
Chrome Safari Continue
Be the first to know
Get browser notifications for breaking news, live events, and exclusive reporting.