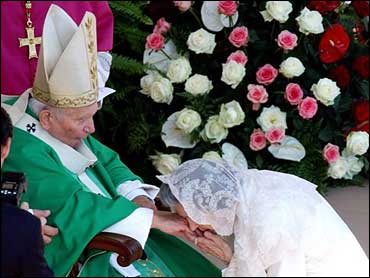 Beatification is the last formal step in the Catholic Church before the possible conferring of sainthood, and John Paul has now beatified a record 1,338 faithful in his quest to give believers new models of sanctity.

Before some 30,000 people, including royalty and government representatives from Latin America and Europe, the pontiff also beatified an Italian nun who worked with sick children in Latin America, a French contemplative monk and a French priest who founded an order of nuns. But it was the choices of mystical Sister Anna Katharina Emmerick and of Karl I, who led Austria through the last years of World War I, that have stirred controversy.

Emmerick, a sickly, virtually illiterate nun whose powers of visualization were notable as a child, drew pilgrims to her bedside in a German convent when word spread of her gory visions of Jesus' last hours of suffering.

Gibson has spoken of how a book recounting her visions inspired him in making his blockbuster movie, with its minutes-long shots of Jesus' bloodied flesh. The Church's choice to honor Emmerick irritated some already unhappy about the Vatican's enthusiasm for a film some called anti-Semitic because it might be seen as depicting Jews as the major force behind Christ's death.

The Vatican has concluded that the veracity of her visions as contained in the 19th century book can't be confirmed. Officials who worked with the Vatican in examining Emmerick's life have said she was chosen for beatification because of her generosity with other poor and her extraordinary empathy with suffering.

Emmerick suffered from inexplicable bleeding wounds similar to those Jesus' suffered at crucifixion.

"Blessed Anna Katharina Emmerick saw the bitter suffering of our Lord Jesus Christ and experienced it on her body," John Paul' said in his homily.

John Paul praised Karl, also known as Charles, as "a friend of peace. In his eyes, the war was something abominable." He also hailed the emperor, who died in 1922, as a model of "political responsibility."

Karl took the throne of the Austro-Hungarian Empire in 1916 and worked for peace, abdicating at the end of the war. Critics have said the Vatican had no business honoring a monarch whose troops used poison gas. Historians say he sought to limit use of the gas, angering his own military commanders.

"He was a man of peace," said the Rev. Ivan Csete, a pastor of St. Thomas Aquinas Church in Forestburgh, New York, who rode to the ceremony in a city bus crowded with Hungarian students. "History would have been different had he succeeded" in his efforts to end the war, added Csete, who said he fled his native Hungary after participating in the ill-fated 1956 uprising there against Communist rule.

A miracle is required for beatification, and the Vatican concluded that in Emmerick's case, the recovery from tuberculosis in 1860 of a nun in Germany was due to her intercession. For Karl, a healing of varicose veins after a Brazilian nun prayed to the monarch for help met the requirement.

Austria's decision to send the president of Parliament was criticized as a violation of separation of church and state.

The polemics over Karl's beatification came at a sensitive time for the Austrian Catholic Church, which has been scandalized by the discovery of child pornography at a seminary and stung the exodus of nearly a half-million Catholics in the past decade.

Leading the list of prelates to help the pope celebrate the beatification Mass was Vienna's Cardinal Christoph Schoenborn.

John Paul's campaign for new role models has generated controversy in the past, including the case of Edith Stein, a Jew who converted to Catholicism and who perished in Auschwitz. The pontiff made her a saint in 1998. Also sensitive are recent efforts aimed at beatifying Pius XII, the World War II pontiff accused by some Jewish groups of not doing enough to prevent the Holocaust.

The other beatified on Sunday Maria Ludovica De Angelis, who died in 1962; Joseph-Marie Cassant, who lived from 1878-1903; and Pierre Vigne, who lived in the 17th and 18th centuries.