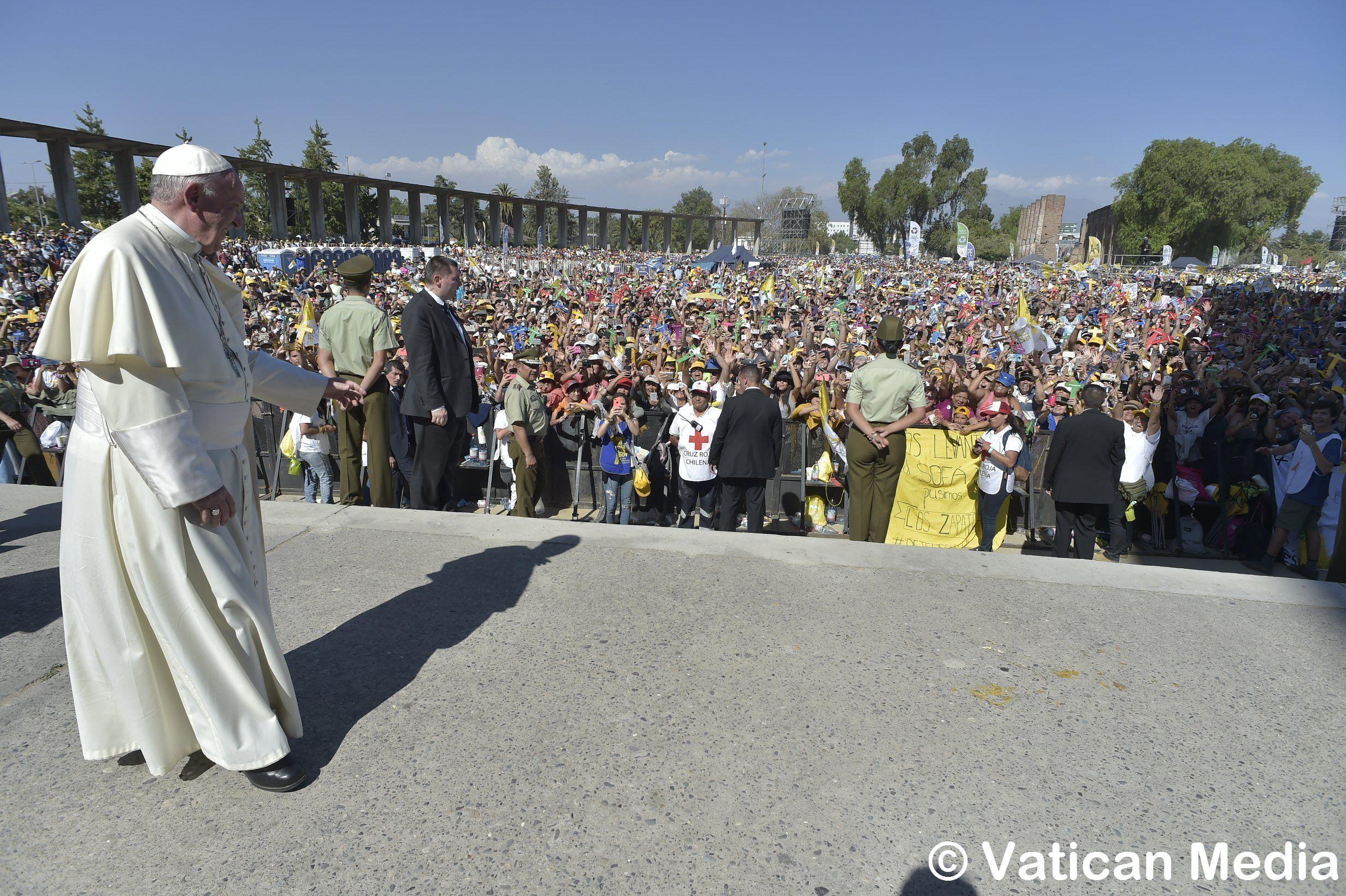 VATICAN CITY -- Pope Francis received a victim's letter in 2015 that graphically detailed how a priest sexually abused him and how other Chilean clergy ignored it, contradicting the pope's recent insistence that no victims had come forward to denounce the cover-up, the letter's author and members of Francis' own sex- abuse commission have told The Associated Press.

The fact that Francis received the eight-page letter, obtained by the AP, challenges his insistence that he has "zero tolerance" for sex abuse and cover-ups. It also calls into question his stated empathy with abuse survivors, compounding the most serious crisis of his five-year papacy.

The scandal exploded last month when Francis' trip to South America was marred by protests over his vigorous defense of Bishop Juan Barros, who is accused by victims of covering up the abuse by the Rev. Fernando Karadima. During the trip, Francis callously dismissed accusations against Barros as "slander," seemingly unaware that victims had placed him at the scene of Karadima's crimes.

On the plane home, confronted by an AP reporter, the pope said: "You, in all good will, tell me that there are victims, but I haven't seen any, because they haven't come forward."

But members of the pope's Commission for the Protection of Minors say that in April 2015, they sent a delegation to Rome specifically to hand-deliver a letter to the pope about Barros. The letter from Juan Carlos Cruz detailed the abuse, kissing and fondling he says he suffered at Karadima's hands, which he said Barros and others witnessed and ignored.

Four members of the commission met with Francis' top abuse adviser, Cardinal Sean O'Malley, explained their objections to Francis' recent appointment of Barros as a bishop in southern Chile, and gave him the letter to deliver to Francis.

"When we gave him (O'Malley) the letter for the pope, he assured us he would give it to the pope and speak of the concerns," then-commission member Marie Collins told the AP. "And at a later date, he assured us that that had been done."

Cruz, who now lives and works in Philadelphia, heard the same later that year.

"Cardinal O'Malley called me after the pope's visit here in Philadelphia and he told me, among other things, that he had given the letter to the pope - in his hands," he said in an interview at his home Sunday.

Neither the Vatican nor O'Malley responded to multiple requests for comment.

While the 2015 summit of Francis' commission was known and publicized at the time, the contents of Cruz's letter - and a photograph of Collins handing it to O'Malley - were not disclosed by members. Cruz provided the letter, and Collins provided the photo, after reading an AP story that reported Francis had claimed to have never heard from any Karadima victims about Barros' behavior.

The Barros affair first caused shockwaves in January 2015 when Francis appointed him bishop of Osorno, Chile, over the objections of the leadership of Chile's bishops' conference and many local priests and laity. They accepted as credible the testimony against Karadima, a prominent Chilean cleric who was sanctioned by the Vatican in 2011 for abusing minors. Barros was a Karadima protege, and according to Cruz and other victims, he witnessed the abuse and did nothing.

"Holy Father, I write you this letter because I'm tired of fighting, of crying and suffering," Cruz wrote in Francis' native Spanish. "Our story is well known and there's no need to repeat it, except to tell you of the horror of having lived this abuse and how I wanted to kill myself."

Cruz and other survivors had for years denounced the cover-up of Karadima's crimes, but were dismissed as liars by the Chilean church hierarchy and the Vatican's own ambassador in Santiago, who refused their repeated requests to meet before and after Barros was appointed.

After Francis' comments backing the Chilean hierarchy caused such an outcry in Chile, he was forced last week to do an about-face: The Vatican announced it was sending in its most respected sex-crimes investigator to take testimony from Cruz and others about Barros.

In the letter to the pope, Cruz begs for Francis to listen to him and make good on his pledge of "zero tolerance."

"Holy Father, it's bad enough that we suffered such tremendous pain and anguish from the sexual and psychological abuse, but the terrible mistreatment we received from our pastors is almost worse," he wrote.

Cruz goes on to detail in explicit terms the homo-eroticized nature of the circle of priests and young boys around Karadima, the charismatic preacher whose El Bosque community in the well-to-do Santiago neighborhood of Providencia produced dozens of priestly vocations and five bishops, including Barros.

He described how Karadima would kiss Barros and fondle his genitals, and do the same with younger priests and teens, and how young priests and seminarians would fight to sit next to Karadima at the table to receive his affections.

"More difficult and tough was when we were in Karadima's room and Juan Barros - if he wasn't kissing Karadima - would watch when Karadima would touch us - the minors - and make us kiss him, saying: 'Put your mouth near mine and stick out your tongue.' He would stick his out and kiss us with his tongue," Cruz told the pope. "Juan Barros was a witness to all this innumerable times, not just with me but with others as well."

"Juan Barros covered up everything that I have told you," he added.

Barros has repeatedly denied witnessing any abuse or covering it up. "I never knew anything about, nor ever imagined, the serious abuses which that priest committed against the victims," he told the AP recently. "I have never approved of nor participated in such serious, dishonest acts, and I have never been convicted by any tribunal of such things."

For the Osorno faithful who have opposed Barros as their bishop, the issue isn't so much a legal matter requiring proof or evidence, as Barros was a young priest at the time and not in a position of authority over Karadima. It's more that if Barros didn't "see" what was happening around him and doesn't find it problematic for a priest to kiss and fondle young boys, he shouldn't be in charge of a diocese where he is responsible for detecting inappropriate sexual behavior, reporting it to police and protecting children from pedophiles like his mentor.

Cruz had arrived at Karadima's community in 1980 as a vulnerable teenager, distraught after the recent death of his father. He has said Karadima told him he would be like a spiritual father to him, but instead sexually abused him.

Based on testimony from Cruz and other former members of the parish, the Vatican in 2011 removed Karadima from ministry and sentenced him to a lifetime of "penance and prayer" for his crimes. Now 87, he lives in a home for elderly priests in Santiago; he hasn't commented on the scandal and the home has declined to accept calls or visits from the news media.

The victims also testified to Chilean prosecutors, who opened an investigation into Karadima after they went public with their accusations in 2010. Chilean prosecutors had to drop charges because too much time had passed, but the judge running the case stressed that it wasn't for lack of proof.

While the victims' testimony was deemed credible by both Vatican and Chilean prosecutors, the local church hierarchy clearly didn't believe them, which might have influenced Francis' view. Cardinal Francisco Javier Errazuriz has acknowledged he didn't believe the victims initially and shelved an investigation. He was forced to reopen it after the victims went public.

He is now one of the Argentine pope's key cardinal advisers.

By the time he finally got his letter into the pope's hands in 2015, Cruz had already sent versions to many other people, and had tried for months to get an appointment with the Vatican ambassador. The embassy's Dec. 15, 2014, email to Cruz - a month before Barros was appointed - was short and to the point:

"The apostolic nunciature has received the message you emailed Dec. 7 to the apostolic nuncio," it read, "and at the same time communicates that your request has been met with an unfavorable response."

One could argue that Francis didn't pay attention to Cruz's letter, since he receives thousands of letters every day from faithful around the world. He can't possibly read them all, much less remember the contents years later. He might have been tired and confused after a weeklong trip to South America when he told an airborne press conference that victims never came forward to accuse Barros of cover-up.

But this was not an ordinary letter, nor were the circumstances under which it arrived in the Vatican.

Francis had named O'Malley, the archbishop of Boston, to head his Commission for the Protection of Minors based on his credibility in having helped clean up the mess in Boston after the U.S. sex abuse scandal exploded there in 2002. The commission gathered outside experts to advise the church on protecting children from pedophiles and educating church personnel about preventing abuse and cover-ups.

The four commission members who were on a special subcommittee dedicated to survivors had flown to Rome specifically to speak with O'Malley about the Barros appointment and to deliver Cruz's letter. A press release issued after the April 12, 2015, meeting read: "Cardinal O'Malley agreed to present the concerns of the subcommittee to the Holy Father."

Commission member Catherine Bonnet, a French child psychiatrist who took the photo of Collins handing the letter to O'Malley, said the commission members had decided to descend on Rome specifically when O'Malley and other members of the pope's group of nine cardinal advisers were meeting, so that O'Malley could put it directly into the pope's hands.

"Cardinal O'Malley promised us when Marie gave to him the letter of Juan Carlos that he will give to Pope Francis," she said.

O'Malley's spokesman in Boston referred requests for comment to the Vatican. Neither the Vatican press office, nor officials at the Pontifical Commission for the Protection of Minors, responded to calls and emails seeking comment.

But O'Malley's remarkable response to Francis' defense of Barros and to his dismissal of the victims while he was in Chile, is perhaps now better understood.

In a rare rebuke of a pope by a cardinal, O'Malley issued a statement Jan. 20 in which he said the pope's words were "a source of great pain for survivors of sexual abuse," and that such expressions had the effect of abandoning victims and relegating them to "discredited exile."

A day later, Francis apologized for having demanded "proof" of wrongdoing by Barros, saying he meant merely that he wanted to see "evidence." But he continued to describe the accusations against Barros as "calumny" and insisted he had never heard from any victims.

Even when told in his airborne press conference Jan. 21 that Karadima's victims had indeed placed Barros at the scene of Karadima's abuse, Francis said: "No one has come forward. They haven't provided any evidence for a judgment. This is all a bit vague. It's something that can't be accepted."

He stood by Barros, saying: "I'm certain he's innocent," even while saying that he considered the testimony of victims to be "evidence" in a cover-up investigation.

"If anyone can give me evidence, I'll be the first to listen," he said.

Cruz said he felt like he had been slapped when he heard those words.

"I was upset," he said, "and at the same time I couldn't believe that someone so high up like the pope himself could lie about this."