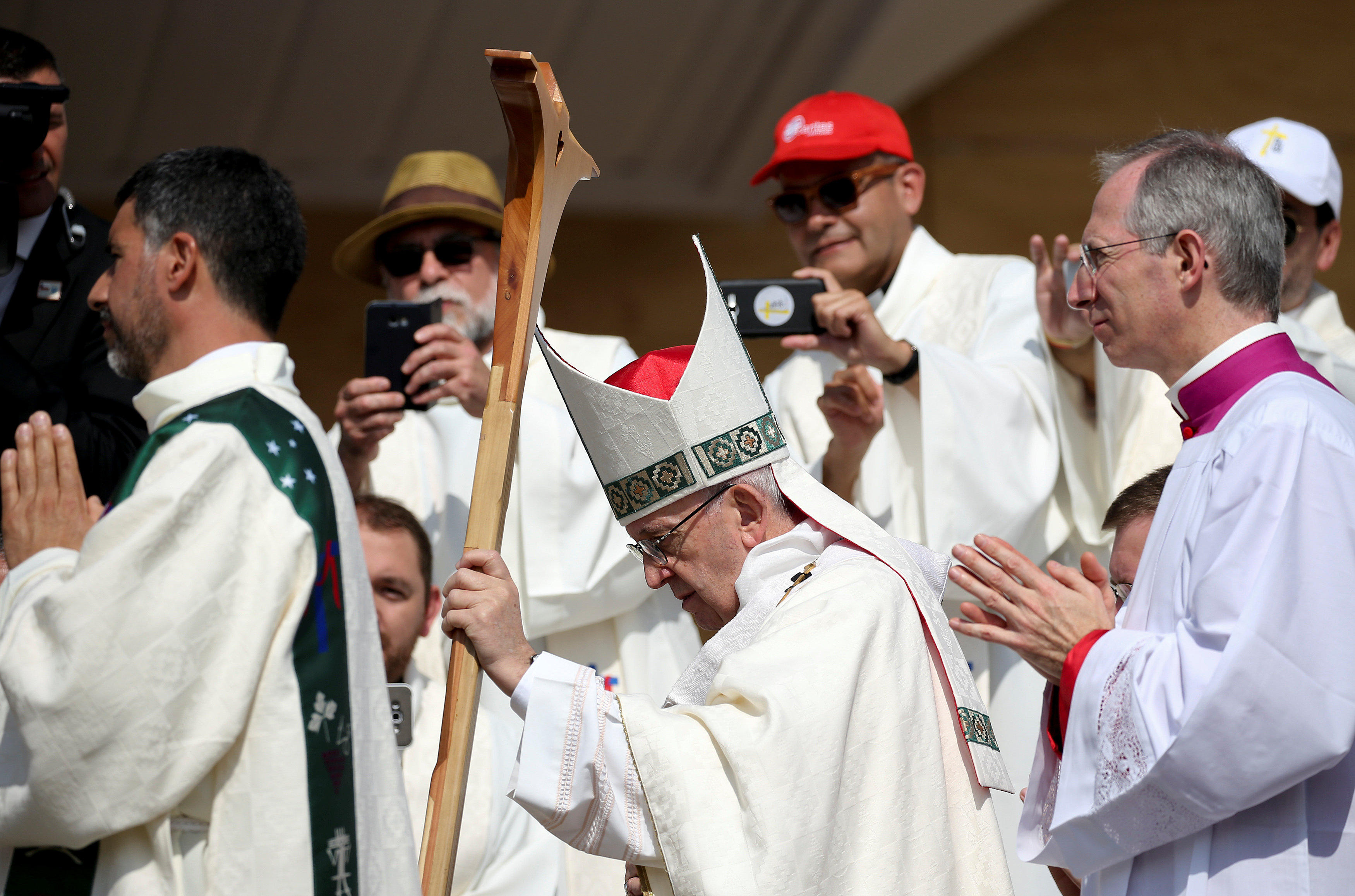 SANTIAGO, Chile -- Pope Francis begged for forgiveness Tuesday for the "irreparable damage" done to children who were raped and molested by priests, opening his visit to Chile by diving head-first into a scandal that has greatly hurt the Catholic Church's credibility here and cast a cloud over his visit.

Francis faced controversy on another front as well: Overnight three more Catholic churches were torched, including one burned to the ground in the southern Araucania region where Francis will visit on Wednesday to meet with Chile's indigenous peoples. While not causing any injuries, the nine church firebombings in the past few days have marked an unprecedented level of protest against history's first Latin American pope on his home turf.

In Santiago, though, an estimated 400,000 jubilant Chileans turned out in droves for his first public Mass, a massive gathering in the capital's O'Higgins park where St. John Paul II celebrated Mass three decades ago. Before the service began, Francis took a long, looping ride in his popemobile through the grounds to greet well-wishers, some of whom had camped out overnight to secure a spot.

In his first event of the day, Francis met privately with Chilean President Michelle Bachelet and addressed lawmakers, judges and other authorities at La Moneda palace. They interrupted him with applause when he said he felt "bound to express my pain and shame" that some of Chile's pastors had sexually abused children in their care.

"I am one with my brother bishops, for it is right to ask forgiveness and make every effort to support the victims, even as we commit ourselves to ensuring that such things do not happen again," he said.

Francis didn't refer by name to Chile's most notorious pedophile priest, the Rev. Fernando Karadima, who was sanctioned in 2011 by the Vatican to a lifetime of "penance and prayer" for sexually molesting minors. Nor did he refer to the fact that the emeritus archbishop of Santiago, a top papal adviser, has acknowledged he knew of complaints against Karadima but didn't remove him from ministry.

Karadima had been a politically connected, charismatic and powerful priest who ministered to a wealthy Santiago community and produced dozens of priestly vocations and five bishops. Victims went public with their accusations in 2010, after complaining for years to church authorities that Karadima would kiss and fondle them when they were teenagers.

While the scandal rocked the church, many Chileans are still furious over Francis' subsequent decision, in 2015, to appoint a Karadima protege as bishop of the southern city of Osorno. Bishop Juan Barros has denied knowing about Karadima's abuse but many Chileans don't believe him, and his appointment has badly split the diocese.

"Sex abuse is Pope Francis' weakest spot in terms of his credibility," said Massimo Faggioli, a Vatican expert and theology professor at Villanova University in Philadelphia. "It is surprising that the pope and his entourage don't understand that they need to be more forthcoming on this issue."

Anne Barrett Doyle, of the online abuse database BishopAccountability.org, praised Francis for opening his visit with the apology, but said Chileans expect him to take action against complicit church leaders.

"This is a crucial opportunity for Francis: With luck, he will not make the mistake of his brother bishops in underestimating the savviness and moral outrage of the Chilean people," said Barrett Doyle, who last week released research showing nearly 80 Chilean priests have been credibly accused or convicted of abuse.

The Karadima scandal and a long cover-up has caused a crisis for the church in Chile, with a recent Latinbarometro survey saying the case was responsible for a significant drop in the number of Chileans who call themselves Catholic, as well as a fall in confidence in the church as an institution.

That distrust extends to Francis, who is making his first visit as pope to this country of 17 million people. The Argentine pope is nearly a native son, having studied in Chile during his Jesuit novitiate and he knows the country well, but Chileans give him the lowest approval rating among the 18 Latin American nations in the survey.

"People are leaving the church because they don't find a protective space there," said Juan Carlos Claret, spokesman for a group of church members in Osorno that has opposed Barros' appointment as bishop. "The pastors are eating the flock."

At a protest Tuesday near O'Higgins park where Francis celebrated Mass, police fired tear gas and water cannons before detaining several dozen demonstrators, according to an Associated Press photographer at the scene. Protesters carried signs with messages reading "Burn, pope!" and "We don't care about the pope!"

Other groups also called for demonstrations against the pontiff.

Victor Hugo Robles, an activist in Chile's lesbian and gay community, said the Vatican tries to paint an image of the pope as being close to the people, particularly those with the most needs.

"We are the ones who need help," said Robles. "Gay people, people living with AIDS. When it comes to those things, the church has an attitude of intolerance, of disgust."

Felipe Morales, from a group called the Workers' Socialist Front, said many were unhappy with the pope and the church's historical influence in Chile. They planned to protest outside while Francis celebrated Mass.

"The role of the church has been nefarious," said Morales. "Sex abuse cases have been covered up and people are unhappy with many other issues."

To be sure, many are excited to see the pope. Thousands lined the streets of Santiago to get a glimpse of Francis after he arrived Monday night, though the crowds were notably thin compared to previous visits to other Latin American capitals. O'Higgins Park, though, was teeming with faithful attending the pope's Mass.

"It was amazing to see him," said Luis Salazar, a young boy who came out with his family to see Francis pass by in his popemobile.

The pope will try to inject new energy into the church during his visit, which includes sessions with migrants, members of Chile's Mapuche indigenous group and victims of the 1973-1990 military dictatorship. It remains to be seen if he will meet with sex abuse survivors. A meeting wasn't on the agenda, but such encounters never are.