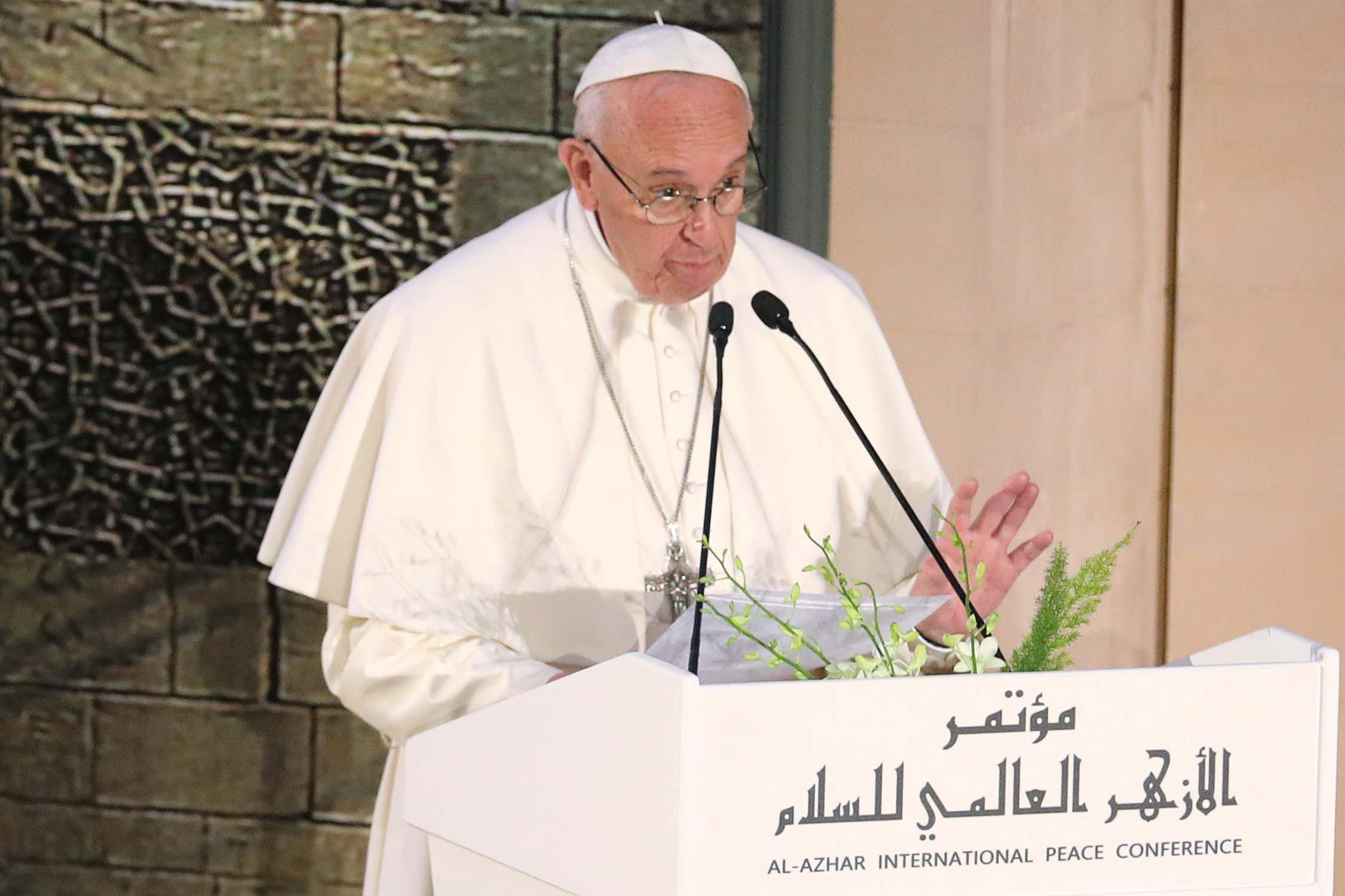 CAIRO -- Pope Francis urged Egypt's leading imams on Friday to teach their students to reject violence in God's name and preach messages of peace and tolerance instead, forging ahead with a delicate visit to the Arab world's most populous country following a spate of deadly Islamic militant attacks against Christians.

Francis arrived to a subdued welcome and a heavy police presence at Cairo's international airport. But he brushed off security concerns by driving into town with his windows rolled down in a simple blue Fiat - not the armored "popemobiles" of his predecessors.

Francis has said he wanted to bring a message of peace to Egypt, which has been enduring an increasingly emboldened insurgency led by a local affiliate of the extremist Islamic State of Iraq and Syria, or ISIS.

In a speech to President Abdel-Fattah El-Sissi and diplomats from around the world, Francis strongly backed the Egyptian government's crackdown against the militants, saying Egypt had a unique role to play in forging peace in the region and in "vanquishing all violence and terrorism."

Francis' major event of the day was a landmark visit to Cairo's Al Azhar university, the revered, 1,000-year-old seat of Sunni Islam learning that trains clerics and scholars from around the world.

There, he warmly embraced Sheikh Ahmed el-Tayeb, Al-Azhar's grand imam who hosted the pope and other senior Muslim leaders, students and scholars at a peace conference. The conference center featured a mock-up of the famous Al-Azhar mosque, complete with faux windows and flooded with purple lights.

Speaking to the crowd, Francis recalled that Egypt's ancient civilizations valued the quest for knowledge and open-minded education, and said a similar commitment to education is required today to combat the "barbarity" of religious extremism among the young.

While Al-Azhar has strongly condemned Islamic fundamentalism, Egypt's pro-government media has accused its leadership of failing to do enough to reform the religious discourse in Islam and purge canonical books from outdated teachings and hatred for non-Muslims.

"As religious leaders, we are called to unmask violence that masquerades as purported sanctity," Francis said to applause from the crowd. "Let us say once more a firm and clear 'No' to every form of violence, vengeance and hatred carried out in the name of religion or in the name of God."

"To counter effectively the barbarity of those who foment hatred with violence, we need to accompany young people, helping them on the path to maturity and teaching them to respond to the incendiary logic of evil by patiently working for the growth of goodness," he added.

El-Tayeb thanked Francis for what he called his "fair" comments against charges of terror and violence leveled against Muslims and Islam.

"We need to cleanse religions from wrong notions, false piety and fraudulent implementations which stoke conflicts and incite hatred and violence," he said. "Islam is not a religion of terrorism because a minority from among its followers hijacked some of its texts" to shed blood and be provided by some with weapons and funds, he said to applause.

Francis too called for an end to the flow of weapons and money to militants, saying that "only by bringing into the light of day the murky maneuverings that feed the cancer of war can its real causes be prevented."

Egypt's el-Sissi, a general-turned-president, declared a nationwide state of emergency following the Palm Sunday attacks in a bid to better deal with the insurgency through wider police powers and swift trials.

"Egypt, in the days of Joseph, saved other peoples from famine; today it is called to save this beloved region from a famine of love and fraternity," he said. "It is called to condemn and vanquish all violence and terrorism."

El-Sissi has had the support of Egypt's Christian community in his crackdown. But he has been criticized for human rights violations and was ostracized by much of the West after ousting Egypt's first democratically elected president in 2013, the Islamist Mohammed Morsi whose one-year rule proved divisive. Francis' support is likely to embolden el-Sissi further after he recently won a coveted White House visit.

"True Islam does not command the killing of the innocent," he said.

Later on Friday, Francis headed to the seat of the Coptic Orthodox Church, whose followers are the vast majority of Egypt's estimated nine million Christians, to meet its spiritual leader, Pope Tawadros II.

Francis and Tawadros presides over an ecumenical prayer service in St. Peter's church, the central Cairo church hit by a suicide bombing in December that killed 30, most of them women. Together the two Christian leaders were to pray for the victims of the attacks.

Francis has frequently spoken out about the present day's Christian martyrs and the "ecumenism of blood" that has united Catholic, Orthodox and other Christians targeted for their faith by Islamic militants.

While Francis eschewed the armored "popemobile," security was visibly tightened for the 27 hours he will be on the ground in Cairo.

Streets designated for the pontiff's motorcade around the Coptic Orthodox cathedral of St. Mark's and the Vatican Embassy in the upscale Zamalek neighborhood were cleared of cars. Police also swarmed Zamalek, a Nile River island where Francis will sleep on Friday at the embassy.

Policemen in riverboats patrolled the Nile in front of the embassy. Security men, meanwhile, were posted every 100 yards or so along the 12-mile stretch between the airport and central Cairo ahead of Francis' arrival and armored cars were stationed in front of the presidential palace.

However, the pope's visit appears not to have caused much disruption to the city of some 18 million people as it fell on the Muslim Friday-Saturday weekend, when the usually congested traffic is significantly lighter.