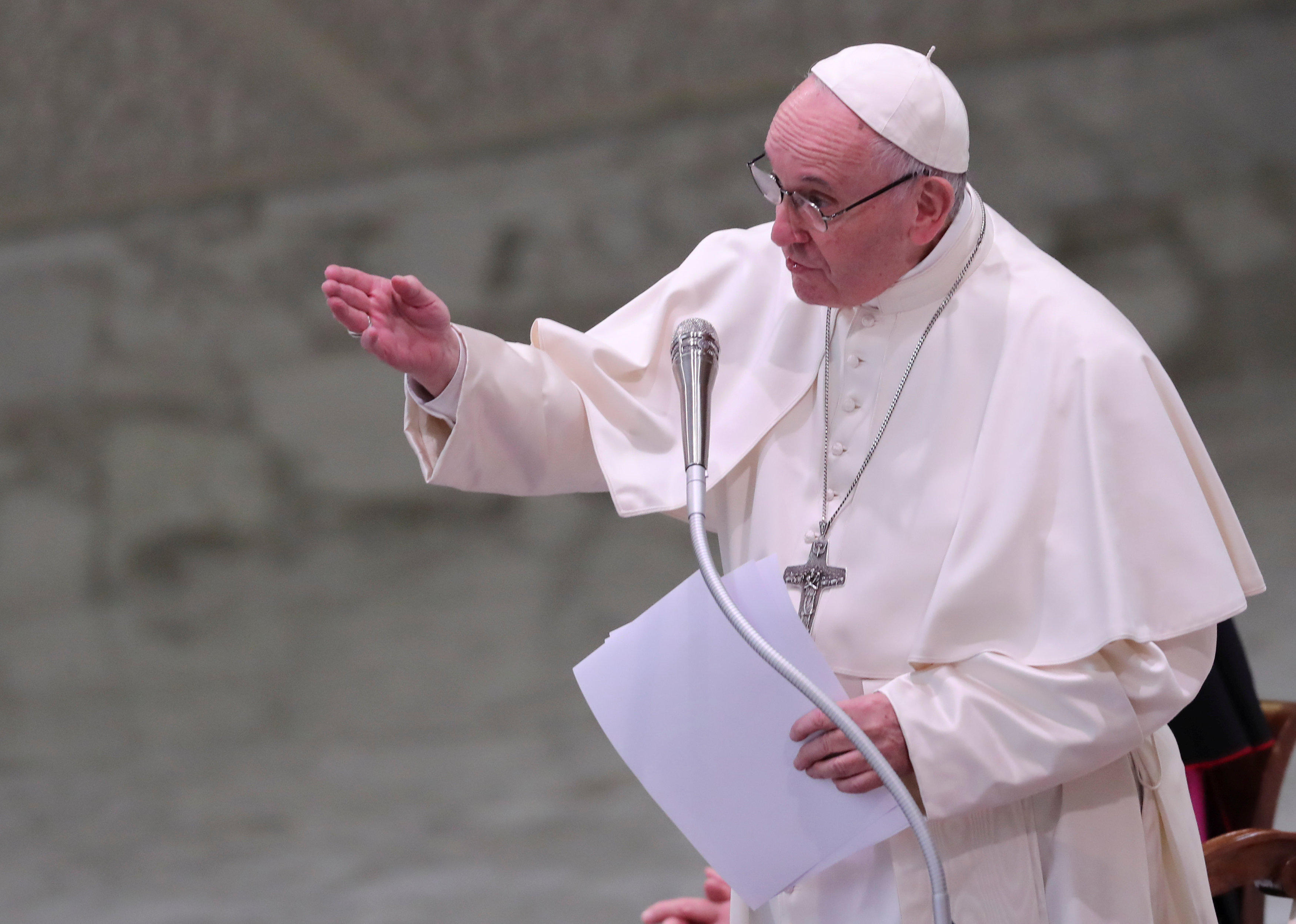 VATICAN CITY --  Pope Francis vowed Friday that the Catholic Church will "never again" cover up clergy sex abuse and demanded that priests who have raped and molested children turn themselves in. Francis dedicated his annual Christmas speech to the Vatican bureaucracy to abuse, evidence that a year of devastating revelations of sexual misconduct and cover-up has shaken his papacy and caused a crisis of confidence in the Catholic hierarchy.

Francis acknowledged that the church in the past had failed to treat the problem seriously, blaming leaders who out of inexperience or short-sightedness acted "irresponsibly" by refusing to believe victims. But he vowed that going forward the church would "never again" cover up or dismiss cases.

"Let it be clear that before these abominations the church will spare no effort to do all that is necessary to bring to justice whosoever has committed such crimes," he said.

Francis urged victims to come forward, thanked the media for giving them a voice and issued a stark warning to abusers: "Convert and hand yourself over to human justice, and prepare for divine justice."

Francis' remarks capped a dreadful year for the Catholic Church, one that began with his own botched handling of a sprawling sex abuse scandal in Chile and ended with the U.S. hierarchy in a free-fall of credibility as state prosecutors have begun uncovering decades of cover-up.

With cases piling up in The U.S., "CBS This Morning" co-anchor Norah O'Donnell asked FBI Director Christopher Wray in September if the FBI would launch a federal investigation into the church.

"There is no institution that we're afraid to investigate, period," Wray said.

Francis has summoned church leaders from around the globe for a February abuse prevention summit, in an indication that he has come to realize that the problem is far greater and far more global than he had understood at the start of his pontificate five years ago.

Francis' demand that abusers turn themselves in to face "human justice" was significant, and echoed his previous demands for mafia bosses and corrupt politicians to convert.

Vatican guidelines currently only call for bishops to report priestly abusers to police in those countries where civil law requires it - a technicality that survivors and their advocates have long blasted as a convenient dodge to the church's moral obligation to protect children regardless of what the law requires.

Francis warned the Vatican bureaucrats who run the 1.2 billion strong Church that the scandal now undermines the credibility of the entire Catholic enterprise and that from now on the church and all its pastors must embark on a continuous path of purification.

He prayed for help so that the Church can discern true cases from false ones, and accusations from slander.

"This is no easy task, since the guilty are capable of skillfully covering their tracks," and choosing victims who will keep silent.

It was perhaps a veiled reference to ex-Cardinal Theodore McCarrick, the disgraced retired archbishop of Washington who is now facing a canonical trial on allegations he groped a teenage altar boy in the 1970s.

The McCarrick revelations have fueled the crisis in confidence in the U.S. and Vatican hierarchy since it was apparently an open secret that he slept with seminarians but nevertheless was allowed to rise to the heights of church power.

Francis' reference to the difficulty in distinguishing allegation from slander was also perhaps a reference to his own failure to believe Chilean victims of a notorious predator priest.

During Francis' disastrous trip to Chile in January, he dismissed survivors' allegations of cover-up as "slander," sparking outrage in Chile and beyond. Francis eventually did an about-face, apologized to the victims and acknowledged he had made "grave errors in judgment" about the case.

Going forward, he urged those who have been victims of sexual abuse, abuse of power and abuse of conscience to speak out.

"The church asks that people not be silent, but bring it objectively to light, since the greater scandal in this matter is that of cloaking the truth," he said.

The cardinals and bishops of the Curia listened attentively, including the dean of the College of Cardinals, Cardinal Angelo Sodano, who has long been blamed for the Vatican's refusal to acknowledge the depth of the problem during the quarter-century pontificate of St. John Paul II.

Sodano, who was John Paul's deputy, made no mention of the scandal that has convulsed the church this year. In his introductory remarks Friday to the pope, he instead thanked Francis for his pastoral visits in Rome, Italy and around the world, for having canonized Pope Paul VI and for having issued a new teaching document.

In previous years, Francis has used his Christmas greetings to issue blistering criticisms of the failings of the Curia, accusing them of suffering from "spiritual Alzheimer's" and taking part in the "terrorism of gossip."

His remarks this year had a more global outlook, noting that all around there are priests who "without batting an eye" are ready to betray all that the church stands for and enter into a "web of corruption" by abusing those in their care.

"Often behind their boundless amiability, impeccably activity and angelic faces, they shamelessly conceal a vicious wolf ready to devour innocent souls," he said.