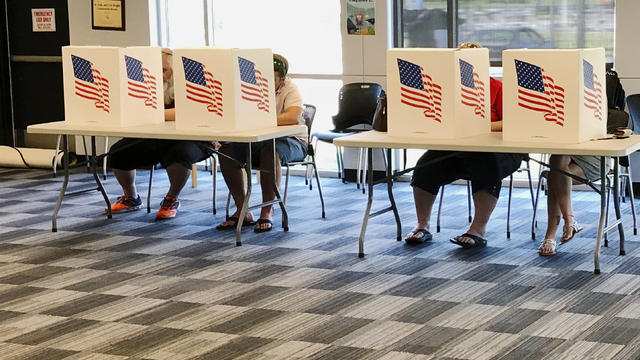 As anticipation builds for Democrats aiming to flip the House, and possibly the Senate, in the 2018 midterm elections this November, pollsters predict that the so-called "Blue Wave" is possible, but not a guarantee.

"I see the House as a toss-up at this point," CBS News Director of Elections and Surveys Anthony Salvanto said on "The Takeout" podcast.

"Structurally, the Democrats to gain, you know, the two dozen seats that they need is a sizable pickup," he said. "It is a sizable pickup in an era where after gerrymandering, after voters have concentrated themselves into small geographic areas, where most districts are won by lopsided margins— there just aren't that many that swing or that can swing."

Salvanto characterizes 50 of the 435 congressional districts as "truly competitive" for Democrats.

"When you start with that and then you look at what's happening in those individual districts, it looks like the Democrats will gain seats," he said. "That looks like it's a virtual certainty. But will they gain enough? That, I think, is a toss-up."

Salvanto is the author of "Where Did You Get This Number? A Pollster's Guide to Making Sense of the World," which will be published by Simon and Schuster, a division of CBS, at the end of the month.

He explains that "a poll is not a forecast," but rather a tool used to better understand the political climate of a particular district. It may be more important to examine the meaning behind a poll instead of relying on its data to predict an election outcome.

"We want to know the answers to what's around, who these people are, and what they think. And that is what a poll tries to do," Salvanto said. "That's what a news pollster in particular is trying to do. You should judge us on whether we explain the world to you, not just whether we predict it."