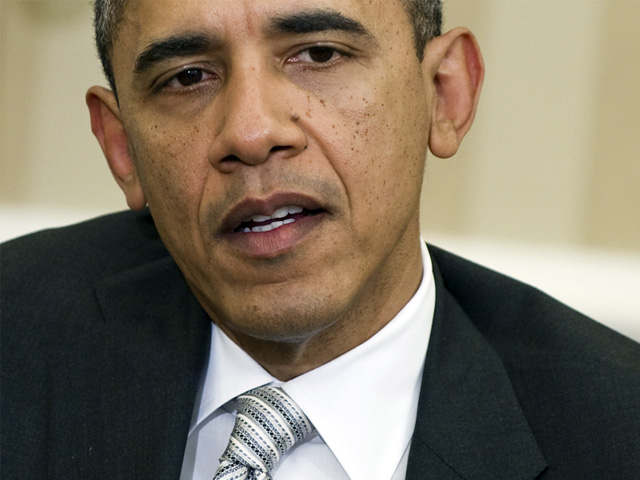 (CBS News) President Obama's approval rating has hit the lowest level ever in CBS News polling, according to the latest CBS News/New York Times survey. The drop may be partially attributable to rising gas prices.

Just 41 percent of Americans approve of the job Mr. Obama is doing as president, according to the poll, conducted from March 7 to 11. Another 47 percent disapprove of his performance, up from 41 percent last month.

The average U.S. price of a gallon of gasoline has jumped 12 cents over the past two weeks. The poll found that most Americans, 54 percent, believe gas prices are something a president can do a lot about.

Americans have historically felt that a president can control gas prices, though experts attribute changes to a variety of factors, many outside of a president's control. They also felt this way when gas prices spiked during the administration of former President George W. Bush.

When asked Tuesday by CBS Pittsburgh affiliate KDKA whether he can impact gas prices, Mr. Obama said, "Understandably people are frustrated when gas prices are going up, and there are things we can do, but they're not going to result, provide results overnight."

The president noted that the U.S. has reduced its dependence on foreign oil under his administration and that fuel efficiency standards for cars are being raised. The administration is exploring other ways to reduce prices, but Mr. Obama said the biggest contributor to the current high prices is rumors of war in the Middle East.

"Which is part of the reason I said a couple weeks ago let's stop with theloose talk about war," he said. "Because a lot of what's driving this is people's concern and fear that there might be major disruptions in the Middle East oil markets."

Of the four remaining GOP candidates, former House Speaker Newt Gingrich has hit Mr. Obama particularly hard on high gas prices, promising on the campaign trail to bring down the price to $2.50.

"It's become somewhat of a political football," Ritterbusch said. "But none of the candidates or the current president can flip a switch and drive gas prices down to $3 a gallon."

Mr. Obama's job rating on the economy remains about the same as it was last month - 39 percent approve, while 54 percent disapprove.

The economy and jobs remains the most important problem facing the country today, according to 51 percent of Americans. Three in four Americans think the economy is at least somewhat bad, including 30 percent who say it is very bad.

Amid speculation that Israel may consider attacking Iran to stop its nuclear ambitions, Americans are split on the president's handling of the situation in Iran: 42 percent approve, while nearly as many - 39 percent - disapprove. Nineteen percent don't know.

878 interviews were conducted with registered voters, including 301 with voters who said they plan to vote in a Republican primary. Phone numbers were dialed from samples of both standard land-line and cell phones. The error due to sampling for results based on the entire sample could be plus or minus three percentage points. The margin of error for the sample of registered voters could be plus or minus three points and six points for the sample of Republican primary voters. The error for subgroups may be higher. This poll release conforms to the Standards of Disclosure of the National Council on Public Polls.