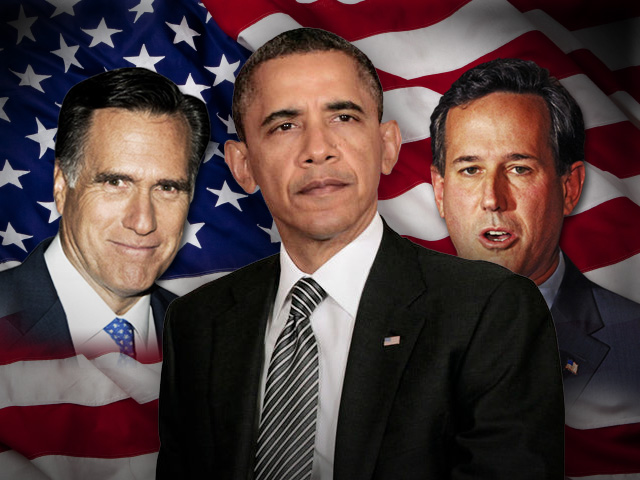 The gap between President Obama and the two leading contenders for the GOP presidential nomination has narrowed, according to a new CBS News/New York Times survey, though Mr. Obama continues to hold a small advantage.

In a potential general election match-up, Mr. Obama leads former Massachusetts Gov. Mitt Romney 47 percent to 44 percent among registered voters. His three-point advantage is within the poll's three point margin of error. In a survey released on February 14, Mr. Obama held a six-point edge over Romney, though the two men were tied in January.

The narrowing gap seems at least partly attributable to a drop in support for Mr. Obama. The new survey showed that Mr. Obama's approval rating has fallen to 41 percent- his lowest approval rating in CBS News polling and a nine-point drop from last month.

Among independents, Mr. Obama's narrow lead over Romney and Santorum is similar to where it stands among primary voters overall. The poll does show a gender gap: While Mr. Obama holds double digit leads over both leading GOP candidates among female registered voters, Romney and Santorum hold six-point and five-point leads, respectively, over Mr. Obama among men.

The president continues to hold double-digit leads in a potential general election matchup over the two other men in the GOP field. His lead over former House Speaker Newt Gingrich is 52 percent to 38 percent, and his lead over Texas Rep. Ron Paul is 49 percent to 39 percent.

Despite the finding that Romney and Santorum match up essentially equally against Mr. Obama, Romney is overwhelmingly seen as the candidate with the best chance to win in November. Fifty-seven percent of Republican primary voters see Romney as the strongest potential nominee; just 17 percent say Santorum is the strongest general election candidate.

Santorum is perceived as more in line with primary voters' own beliefs, however. While about half of Republican primary voters say Romney's views on most issues are about right, two thirds say Santorum's views on most issues are in line with their own. More than one third say Romney is insufficiently conservative, compared to just 11 percent who say that about Santorum.

Santorum leads Romney 34 percent to 30 percent among Republican primary voters nationwide, followed by Gingrich with 13 percent support and Paul with 8 percent support. Romney - who CBS News estimates has secured more than twice as many delegates as Santorum - is seen by 73 percent of GOP primary voters as likely to win the nomination.

Republican primary voters overwhelmingly see the economy and jobs as the most important problem facing the country, and on that Romney has an edge: One in three is "very" confident in his ability to manage the economy, compared to 22 percent for Santorum. Forty-two percent say the candidates are not paying enough attention to the issue.

Santorum nearly keeps pace with Romney when it comes to their confidence in the ability of the candidates to be commander-in-chief. About three in four Republican primary voters are either very or somewhat confident in both candidates, though Romney holds a small edge. Gingrich is most likely to inspire strong confidence - 38 percent say they are "very" confident in him on this question - though he is also slightly more likely than the two leading contenders to be viewed as unable to be an effective commander-in-chief. Paul is the only candidate who is widely seen as unqualified for the role, with 60 percent saying they are not too confident or not at all confident in his ability to serve as commander in chief.

Though some have suggested Santorum's remarks concerning the "dangers" of contraceptioncould hurt him among women, he holds an edge over Romney among female Republican primary voters. Santorum wins the support of 41 percent of female GOP primary voters, compared to 27 percent for Romney. Romney leads among men, with 32 percent support compared to 27 percent for Santorum.

Poll: Most GOP voters expect Romney nomination
Most support U.S. military action to stop Iran from getting nuclear weapons
Most say employers should be allowed not to cover contraception
Obama's approval rating sinks to new low
Most think president can impact gas prices

This poll was conducted by telephone from March 7-11, 2012 among 1009 adults nationwide. 878 interviews were conducted with registered voters, including 301 with voters who said they plan to vote in a Republican primary. Phone numbers were dialed from samples of both standard land-line and cell phones. The error due to sampling for results based on the entire sample could be plus or minus three percentage points. The margin of error for the sample of registered voters could be plus or minus three points and six points for the sample of Republican primary voters. The error for subgroups may be higher. This poll release conforms to the Standards of Disclosure of the National Council on Public Polls.