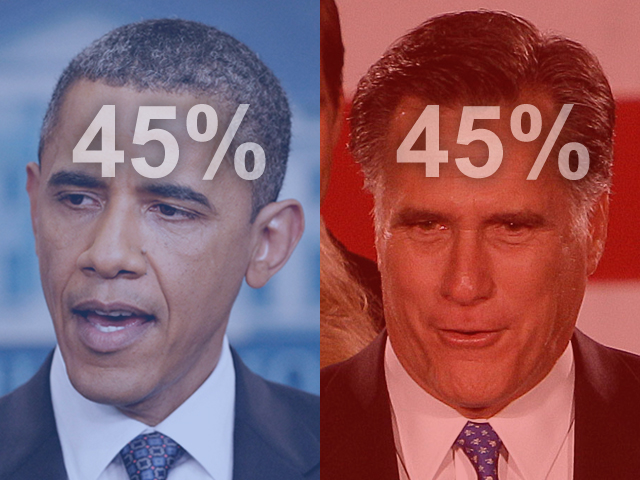 With less than 10 months to go before the presidential election, President Obama and front-runner Mitt Romney are in a dead heat in the latest CBS News/ New York Times poll.

If the November presidential election were held today, 45 percent of registered voters say they would support Mr. Obama, while 45 percent would vote for the former Massachusetts governor, according to the poll, conducted January 12-17.

Independents show a preference for Paul and Romney over Mr. Obama, but they choose Mr. Obama over Newt Gingrich, Rick Santorum or Rick Perry.

Voters divide in their overall opinions of Mr. Obama: 38 percent view him favorably, but more - 45 percent - have an unfavorable impression of him. While opinions of the president among registered voters are mixed, they are more positive than voters' views of any of the Republican candidates running for president.

Nationally, Romney has opened up a lead now in Republican primary voters' preference for the Republican presidential nomination, earning 28 percent support and pulling away a bit from a fractured field.

Gingrich is in second at 21 percent, followed by Santorum at 16 percent and Paul at 15 percent.

Behind the horserace numbers lies a still-tight race among some key groups - including, importantly, Tea Party backers - the voters who powered the party's gains in 2010 and may yet be pivotal in 2012. They comprise 44 percent of Republican primary voters in this poll.

Among Tea Party supporters, Romney still leads with 29 percent support, but Gingrich is close behind with 28 percent. Santorum comes in third with 18 percent, followed by Paul at 12 percent.

Romney's business experience may be keeping him competitive among Tea Party backers: They're more likely than other primary voters to seek someone with a business background specifically, and not government experience. That may be balancing out the fact that Tea Partiers see Santorum - not Romney - as sharing their values.

It's also still a tight race among other critical groups within the Republican party, including conservatives (who account for six in 10 voters) and white evangelicals, who make up a large number of Republican primary voters, especially in southern and Midwestern states.

Paul -- who is fourth nationally but coming off a second-place showing in the New Hampshire primary -- does much better with men than with women, as he did in the Granite state. Paul also wins the support of 23 percent of moderates. Romney also scores well among moderates with 38 percent support.

In many states' primaries, independents can join in the voting along with Republicans; Mitt Romney currently does well with both groups among primary voters, and that may help explain why he draws even in a general election matchup with President Obama, too.

As this and other polls have noted throughout the contest, the lion's share of primary voters (74 percent) say they could still change their minds about whom to support, and the race remains fluid.

In fact, all the top tier candidates elicit reservations among their current supporters, and 62 percent of Republican voters overall have reservations about their candidate.

After top finishes in both the Iowa caucuses and the New Hampshire primary, Mitt Romney holds a lead over the other candidates in this national poll. Should Romney win the Republican nomination, many Tea Party supporters and evangelicals would support him with reservations or only because he would be the Republican nominee - but very few say they would not support him.

Thirty-five percent of Tea Party supporters say they will enthusiastically support Romney if he is the nominee, but they are more enthusiastic about Santorum (45 percent) or Gingrich (41 percent).

Romney is increasingly likely to be viewed as the most electable candidate: 56 percent of primary voters say that, up from 49 percent earlier in January, and 37 percent in December.

Romney is also viewed as best at handling the economy and unemployment at 28 percent, although Gingrich is close behind at 27 percent, and has risen since earlier this month.

Despite Romney's strengths, a plurality of Republican voters, 25 percent, say Santorum best represents the values they live by.

With 39 percent or Republican primary voters holding a favorable view of him, Romney is viewed the most positively of the five candidates remaining in the Republican race. Thirty-four percent have a favorable opinion of Gingrich, though slightly more - 36 percent - view him unfavorably. Thirty-three percent view Santorum favorably, though more than half say they still have not formed an opinion of him. Paul and Perry receive net negative evaluations: More of these voters view each negatively than positively.

Among registered voters overall, most do not place much importance on whether or not a candidate shares their own religion; 41 percent say it is at least somewhat important that they do, but 59 percent say it's not important.

1,021 interviews were conducted with registered voters and 340 with voters who said they plan to vote in a Republican primary. Phone numbers were dialed from samples of both standard land-line and cell phones. The error due to sampling for results based on the entire sample could be plus or minus three percentage points. The margin of error for the sample of registered voters could be plus or minus three points and five points for the sample of Republican primary voters. The error for subgroups may be higher. This poll release conforms to the Standards of Disclosure of the National Council on Public Polls.