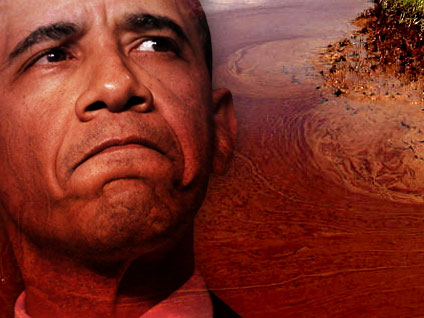 Most Americans do not believe President Obama has a clear plan to deal with the oil spill in the Gulf, according to a new CBS News/New York Times poll.

Just 32 percent say Mr. Obama has a clear plan to deal with the oil leak, while 59 percent (including 64 percent of Gulf coast residents) say he does not.

The numbers are not much better among those who watched the president's Oval Office speech on the spill last week, with 35 percent of that group saying he has a clear plan and 56 percent saying he does not.

A majority of Americans - 61 percent - says the president's response to the oil spill was too slow. Just 31 percent say they have "a lot" of confidence in his ability to handle a crisis, though a majority has at least some confidence that he can do so. Since January, the percentage who says Mr. Obama has strong qualities of leadership has fallen from 70 percent to 62 percent.

The president's overall approval rating stands at 47 percent, unchanged from one month ago. The percentage who disapproves of his performance has also held steady and now stands at 43 percent.

Cleaning Up and Paying Out:

One in two Americans say they are not very or not at all confident that BP will compensate people affected by the spill. Just ten percent are very confident that the company will do so. Most Americans believe Mr. Obama has at least some control over BP making payments.

Gulf coast residents are slightly more optimistic than Americans overall: 60 percent are at least somewhat confident that the oil giant will compensate those affected by the spill.

While Americans are far more likely to trust the federal government than BP when it comes to cleaning up the spill, two in three believe the Obama administration could be doing more than it is now.

A mere 13 percent of Americans (including 21 percent of Gulf coast residents) approve of BP's handling of the spill. Seventy-nine percent disapprove, and 81 percent believe the company could be doing more to clean up the spill.

Energy, The Economy, and the Angry Gulf Coast:

Fifty-eight percent of Americans say that United States energy policy needs fundamental changes going forward. Thirty-one percent say it should be completely rebuilt. Almost all Americans believe the United States is too dependent on other countries for its supply of oil.

Two in three Americans say the federal government's moratorium on offshore drilling is a good idea, while 30 percent say the moratorium should be lifted because of its impact on the Gulf coast economy. And while 42 percent favor increased offshore drilling, 49 percent oppose it.

Like Americans overall, a majority of Gulf coast residents say they are angry about the oil spill. Fifty-four percent of those in the region say the spill is hurting their community significantly, and 65 percent say they have been affected at least indirectly.

Americans continue to largely see the economy as the most pressing problem facing the country (40 percent say so), though the Gulf spill is now cited second at 13 percent.

Read the Complete Poll This poll was conducted among a random sample of 1,259 adults nationwide, interviewed by telephone June 16-20, 2010. Phone numbers were dialed from random digit dial samples of both standard land-line and cell phones. The error due to sampling for results based on the entire sample could be plus or minus three percentage points. The error for subgroups is higher.

An oversample of residents in coastal counties of Alabama, Louisiana, and Mississippi was conducted for this poll, for a total of 318 interviews. The results were then weighted in proportion to the adult population. The margin of error for the sample of these Gulf Coast residents is six points.