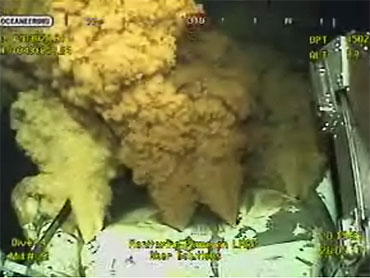 Americans are pessimistic that BP will be able to stop the oil leak in the Gulf of Mexico anytime soon, a new CBS News/New York Times poll finds, with fewer than one in five expecting BP to cap the well within a month.

Sixty-four percent say oil will be spewing into the Gulf for at least several more months, including 16 percent who expect the leak to continue for a year or longer. Another seven percent believe the well will never be capped.

President Obama said last week he expects BP to be capturing "up to 90 percent" of the leaking oil "in the coming weeks and days."

Americans living in the Gulf coast region are even more pessimistic than Americans overall, with 22 percent expecting the leak to continue for a year or more and 11 percent saying it will never be capped.

Most do expect the Gulf's economy and environment to recover, however.

The full CBS News/New York Times poll on the Gulf oil spill will be released at 6:30 p.m. Eastern.

This poll was conducted among a random sample of 1,259 adults nationwide, interviewed by telephone June 16-20, 2010. Phone numbers were dialed from random digit dial samples of both standard land-line and cell phones. The error due to sampling for results based on the entire sample could be plus or minus three percentage points. The error for subgroups is higher.

An oversample of residents in coastal counties of Alabama, Louisiana, and Mississippi was conducted for this poll, for a total of 318 interviews. The results were then weighted in proportion to the adult population. The margin of error for the sample of these Gulf Coast residents is six points. This poll release conforms to the Standards of Disclosure of the National Council on Public Polls.