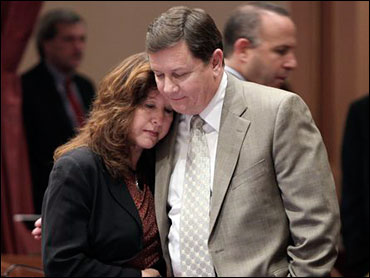 A delicate budget fix crafted by Gov. Arnold Schwarzenegger and legislative leaders was on the brink of collapse early Wednesday after Republicans in the Senate ousted their leader. The late-night coup could derail already strained budget talks by requiring them to renegotiate with a new Republican leader.

The current package containing billions in tax hikes, spending cuts and borrowing took leaders more than three months to put together as the state tries to pass a midyear budget fix and avoid fiscal calamity.

Lawmakers viewed the leadership change as a major setback after they fell short by just one GOP vote, but Democratic leader Darrell Steinberg said he didn't want to speculate what it would mean for the package.

The pressure on California lawmakers to pass a spending package intensified, as layoff notices went out Tuesday to state agencies, hundreds of public works projects were on the brink of losing state funding and the Legislature appeared unable to break a political logjam.

At stake is the financial stability of the nation's most populous state. Tax revenues have plunged by billions of dollars as the recession clobbers California, leaving the state without sufficient cash to pay its bills.

The Senate's leader has said the chamber will remain in continuous session until it passes the budget plan, which is intended to close a $42 billion deficit in this fiscal year and the next one.

The state also planned to lay off 20,000 employees. Notices will start going out to workers in corrections, health and human services and other agencies that receive money from the general fund. Administration officials are seeking to eliminate up to 10,000 jobs as part of the governor's order to cut 10 percent from the government payroll.

Cogdill, who served just 10 months representing a caucus that has grown increasingly conservative over the years, said he negotiated a spending cap, which the Republicans had been working for, and did all he could under the confines of the political system.

"I did the best job I could," said Cogdill, who was applauded on the Senate floor after he was removed. "I felt sincerely when we took the budget to the floor the votes were there. Obviously, that wasn't the case. But that wasn't my belief when the budget went to the floor."

The tax increases contained in the current legislative package, worth some $14.4 billion, are proving to be a near insurmountable hurdle to sealing the deal. The state Assembly appears to have the votes to pass the budget plan, but it is snagged in the Senate, where Republicans have refused to support new taxes.