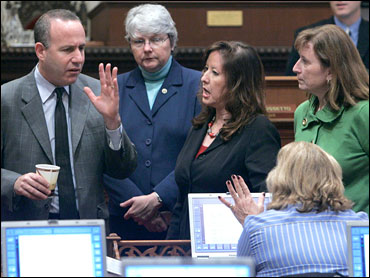 After a frustrating holiday weekend that failed to yield the one vote needed to end California's budget stalemate, the state is poised to begin layoff proceedings Tuesday for 20,000 government workers.

In addition to the layoffs, the state also plans to halt all remaining public works projects, potentially putting thousands of construction workers out of jobs.

"We are dealing with a catastrophe of unbelievable proportions," said state Sen. Alan Lowenthal, a Democrat from Long Beach and chairman of the Senate transportation committee.

Senate leader Darrell Steinberg announced late Monday that lawmakers had failed to find the final vote in his chamber as Republicans refused to support tax increases. He called a session for Tuesday and said he would put the tax provisions of the budget proposal up for a vote, even if they would not pass.

Steinberg warned lawmakers to bring their toothbrushes, saying they would not leave until that vote was secured.

"One member," Steinberg said. "One more member to put the interest of the state ahead of ideology and ahead of any parochial concern."

Like other states, California faces plunging tax revenue that has imperiled state services. The proposal put before lawmakers this weekend was negotiated by Schwarzenegger and the four legislative leaders and appeared to have support of the required two-thirds majority in the state Assembly.

However, it was falling one Republican vote short in the Senate, a situation that had not changed throughout a weekend marked by long hours and uncertainty over the state's future.

The plan includes $15.1 billion in program cuts, $14.4 billion in temporary tax increases and $11.4 billion in borrowing. The package also would send five ballot measures to voters in a special election to be held May 19.

The stalled effort prompted Schwarzenegger to make good on an earlier promise to begin the layoff process for thousands of state workers.

The governor had delayed releasing the notices on Friday when it appeared lawmakers would pass a compromise plan to close the state's $42 billion shortfall. But with marathon weekend sessions failing to produce the necessary votes, Schwarzenegger's spokesman said the administration had no choice.

"In the absence of a budget, the governor must do everything he can to cut back on state spending," spokesman Aaron McLear said.

The notices will start going out Tuesday to 20,000 workers in corrections, health and human services and other agencies that receive money from the general fund. Administration officials are seeking to eliminate up to 10,000 jobs as part of the governor's order to cut 10 percent from the government payroll.

Despite the warnings of impending fiscal calamity, most rank-and-file Republicans have refused to agree to higher taxes. Republican lawmakers blamed Democrats for years of overspending.

"You're not going to go back to the people's pocketbooks to fuel that spending," said state Sen. Dennis Hollingsworth, R-Temecula.

During a lively floor session Monday night, state Sen. George Runner, R-Lancaster, defended his colleagues' stance against tax hikes and said his constituents were pleading with him to vote no on the budget proposal.

He accused Democrats, who hold majorities in both houses, of using the recession to drive an agenda of tax increases.

"You want this emergency," Runner said, drawing jeers from Democrats in the chamber. "Listen, you may not like to hear what we have to say, but it's what we believe."

Steinberg, the Senate president pro tem, acknowledged that tax increases were difficult for all lawmakers to swallow but said the Legislature had no choice.

"Nobody likes that idea, but remember the reason we are in this crisis is because we are in a national and international crisis," he said.

Lawmakers broke the record for longest legislative session in state history over the weekend before disbanding Sunday night. The Assembly was at one point in session for 30 hours.