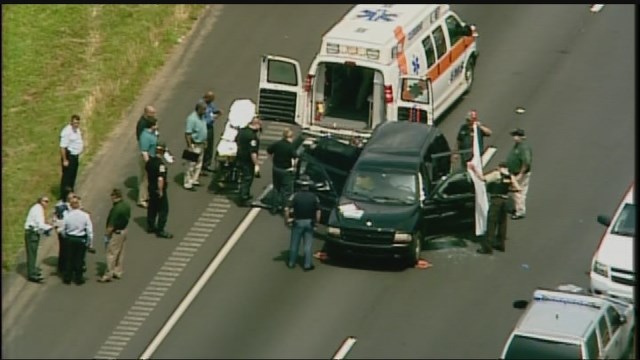 HEFLIN, Ala. - A woman was abducted by her husband's mistress in suburban Atlanta and then shot in what authorities called a murder-suicide after a freeway pursuit into Alabama, police said Thursday.

The vehicle was spotted Thursday morning in west Georgia and deputies from the Carroll County Sheriff's office and other Georgia law enforcement agencies chased it along I-20 into Alabama, said Carroll County Chief Deputy Sheriff Brad Robinson.

The SUV stopped at mile marker 208 on a stretch of the freeway in Cleburne County, Alabama, and a standoff ensued, Alabama Law Enforcement Agency spokesman Steve Jarrett said in an emailed statement.

Fraser said the kidnapping suspect reached into the backseat, grabbed a gun and shot Barnett before shooting herself. Both women were dead inside the SUV when authorities approached it, Robinson said.

The abduction was reported by one of Barnett's relatives, Fraser said. Fraser also said the suspect was the mistress of Barnett's husband. Authorities have not yet released the suspect's name.