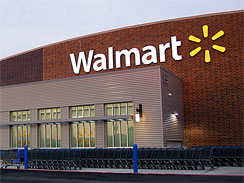 STATESVILLE, N.C. - Police have charged an 83-year-old greeter at a North Carolina Walmart with trying to rob the store over the weekend.

Police said George Plane Jr. of Mooresville was working Sunday night when he went to his car, donned a disguise and walked back inside the Statesville store with a gun.

He was being held Monday on multiple charges, including robbery with a dangerous weapon.

It could not be immediately determined Monday if he has a lawyer.